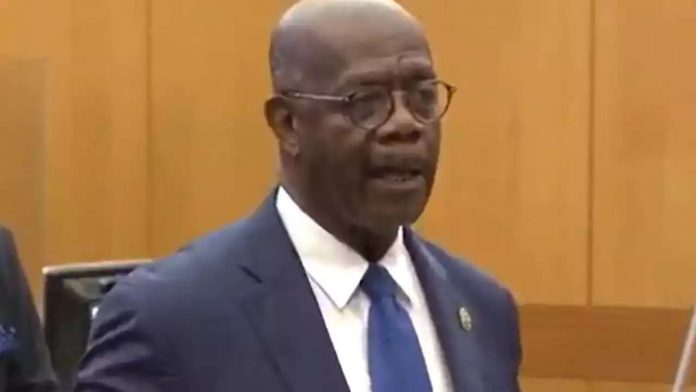 The officer who shot and killed Rayshard Brooks has been arrested.

The former Atlanta cop who shot
Rayshard Brooks
in the back and killed him has now been charged with felony murder, and the cop’s partner has agreed to testify against him.
Fulton County District Attorney
announced 11 charges against
Garrett Rolfe
, including multiple acts of aggravated assault. Howard made particular notice that Rolfe kicked Brooks while he lay dying.
Howard made it clear … he does not believe Rolfe feared for his life in any way, shape or form. Howard noted Brooks had been cordial, cooperative and calm for more than 41 minutes. The D.A. said Rolfe was not motivated by fear but rather”another type of emotion.” Howard didn’t specifically say which emotion, but did say you can hear Rolfe right after he shot Brooks say,”I got him.”
It’s especially significant the other cop,
Devin Brosnan
, has turned state’s evidence, and he’ll make a statement soon on what happened, but the D.A. says psychologically he’s not up to it right now.
Atlanta Police Department
Howard has charged Brosnan with aggravated assault — he’s on video stepping on Brooks’ shoulder.

He’s also been charged with failure to render timely aid. He could face more than 20 years in prison, but it’s almost certain he’ll get way less for cooperating.
Video of the incident shows
Brooks was shot
by Rolfe during a chase in a Wendy’s parking lot after Brooks had obtained one of the officer’s Tasers and was attempting to flee arrest following a failed breathalyzer test.
This is a sea change to the extent prosecutors have now sent a message to cops they don’t have to blindly stand by colleagues who cross the line.
Play video content
ANOTHER ANGLE
TMZ.com
Howard said his office talked to multiple witnesses and reviewed a number of videos and other physical evidence before reaching the decision to charge them.
The D.A. is recommending a $50,000 bond for Brosnan and no bond at all for Rolfe. Both men have until Thursday night to surrender.

Strengthen Your Legs Over Lunch With This 10-Minute Workout

Tenille Townes Nashville Songwriter Dials Up the Empathy on ‘The Lemonade...