Home Woman A Major Star Wars’ Villain Might Join The Mandalorian’ for Season 2... 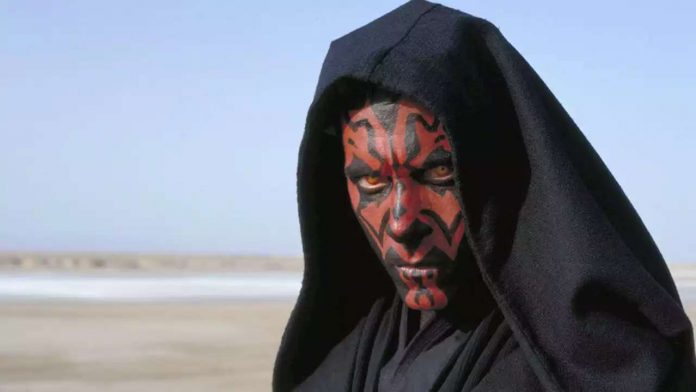 We thought he died—but did he?

Anything’s possible in the Star Wars universe—even if that’s bringing a character back from the dead. This could be an explanation behind The Mandalorian‘s season 2 Darth Maul theory, which fans can’t seem to let go of after yet another hint emerged about the infamous villain.
For The Mandalorian fans who are just getting into the Star Wars universe, you might not be entirely familiar with the devilish Sith Lord of yesteryear. Darth Maul first made his appearance in 1999’s Star Wars: The Phantom Menace (Episode I), played by actor Ray Park, and his character had a recent resurgence on Lucasfilm’s animated series, Star Wars: Rebels. Yet according to that series’ timeline (which takes place before the events of The Mandalorian), Maul is already dead.
That said, alternate storylines haven’t always stopped showrunners of the Star Wars franchise from making convenient deviations. For example, in the case of Maul, his character *has* already seemingly died on-screen once before, only to come back: At the end of Star Wars: The Phantom Menace (Episode I) Kenobi chopped the Sith Lord in half—but his return by The Clone Wars, and later Star Wars: Rebels, proves he couldn’t be taken out quite so easily.
Stream ‘Star Wars: The Phantom Menace… $6.99 buy it So while it seemed unlikely at first that Darth Maul would be resurrected for Season 2 of The Mandalorian, fans are sensing there may be an exception—especially after Maul’s original actor, Park, posted several hints to Instagram.

Stream ‘Star Wars: Rebels’ on Disney+ $6.99 buy it In April 2020, Park, 45, posted the following black-and-white symbol to his page. Fans familiar with the design know that it represents Maul. But what’s more, Park followed up with a comment taken straight from The Mandalorian’s universe: “THIS IS THE WAY.”
View this post on Instagram “THIS IS THE WAY”.
A post shared by Actor Ray Park (@iamraypark) on Apr 28, 2020 at 4:37pm PDT
Since this first suggestive post, Park has continued dropping “this is the way”-themed hints on his page for Star Wars fans—leaving many of us to believe that he’s trying to tell us something. We won’t know for sure until The Mandalorian’s release date, but we can dream. We’d love to see Mando take on Maul.
Stream ‘The Mandalorian’ on Disney+ $6.99 buy it The Mandalorian Season 1 is available to stream on Disney Plus.

Our mission at STYLECASTER is to bring style to the people, and we only feature products we think you’ll love as much as we do. Please note that if you purchase something by clicking on a link within this story, we may receive a small commission of the sale and the retailer may receive certain auditable data for accounting purposes.

These Volunteers Give Makeovers And Hope To Homeless People On Skid...

Katie Price signs Princess up with her agency as fans fear...