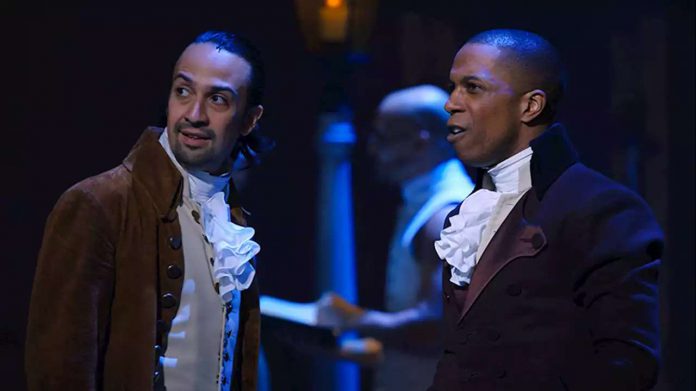 When it opened in 2015, “Hamilton” instantly became both the hottest ticket on Broadway and the hardest to come by. Sure, if you were Beyoncé, Oprah, the Obamas, or just willing to shell out hundre…

Lin, this is technically the first time you’re seeing “Hamilton” with the original company. Was that weird?
Lin-Manuel Miranda:
To be honest, I probably watch myself least when I’m watching this movie. When I watch it, I see me at the most tired I have ever been in the history of my life. Planning two “Ham” shows a week, raising a newborn child, and filming on my day off. But luckily that all works for “Hamilton.” Hamilton is a relentless character. The rings under my eyes serve the character beautifully.
Thomas Kail:
No makeup. That’s really how tired he was.
Miranda:
I remember a lot of the reviews when we opened on Broadway were like, “Miranda, who looked tired at the show I saw…” And I was like, “Guys, ‘In the Heights’ was a long time ago. That’s just what my face looks like now.” But it’s hard to criticize my own performance because it’s what I was doing for a year. This is the best rehearsed movie in the history of movies. Every actor has performed this work hundreds and hundreds of times. So it was really about staying grounded and honoring what we’ve been doing for audiences.
Why did you want to film the show?
Miranda:
Theaters struggle with the notion of accessibility. We had our front two rows for 10 bucks via lottery. We did extra shows out in the street for people. So we prioritized two things: One, we said, “It’s a crime if kids can’t see this show.” And then it was, “How do we preserve the lightning in the bottle that is these actors in this moment?”
Kail:
We were conscious that if you film anything, it changes the equation. It’s not a negative impact, it just changes the thing. This was as close as we could get to trying to collect as much of the energy that existed in the room at the Richard Rogers in New York City.
What’s the biggest difference in directing for the stage versus this movie?
Kail:
The audience is so much more aware of how tired Lin looks.
[Laughs]
It’s probably the only time in my filmmaking career where I will talk about performance as little as I did to the cast. They knew exactly what to do. My job was to not get in the way of that.
Another thing that was quite different is when you’re editing, no one was ever saying it has to be shorter. We were not solving story problems, so that part of your brain is completely freed up.
Miranda and Kail with choreographer Andy Blankenbuehler and musical director Alex Lacamoire before “Hamilton” opened on Broadway
Carolyn Contino/BEI/Shutterstock
Now that you’ve had time away from performing in the show, what do you take from that experience?
Miranda:
From the moment we performed the first show with the Public [Theatre], we had the thing that no one can buy — and everyone works very hard to buy — which is that everyone who left the show told five people about the show. What the movie brings back to me is the joy of performing with those actors, with whom we had developed the material for so many years. When I watch “The Room Where It Happens,” I’m watching Leslie [Odom Jr.], but I’m also remembering at that moment, I’m free styling with Daveed [Diggs] stage left, because that’s the one moment we had together backstage in all of act two. When I’m watching “Helpless,” I’m remembering the time that Anthony Ramos drank a little bottle of Tabasco sauce and then tried to do the rest of the number with his face on fire. Also my memories of Jonathan Groff making faces at me as he’s walking upstage, and I’m emerging for “Right Hand Man.” I watch it with this double vision of my lived experience, and with these Gods-eye views of the whole show.
This was supposed to premiere in movie theaters, but now it’s debuting on Disney Plus since cinemas are closed. Are you disappointed people won’t be able to watch it on the big screen?
Miranda:
We hope the possibility still exists and that once movie theaters are open again, there’s a world in which this plays in movie theaters. But you also have to acknowledge the timeline of the reality you live in. The timeline we live in, there’s no live theater anywhere. I’m just thrilled that we have this giant joyous reminder of how special live theater is in the form of this “Hamilton” movie.
Do any songs or lyrics have renewed relevance in this current political climate?
Miranda:
One of the accidental reasons “Hamilton” resonates in different ways is because it brushes up against the origin of the United States.

I don’t believe it’s a very political show, but I do believe that the only political insight I had was that every problem at the founding is a problem we’re still having. Every fight we had at the founding is a fight we’re still having. That’s a source of frustration and of comfort.
The lyrics about slavery in the show, as we were having a national conversation about the effects of slavery and systemic racism and white supremacy, they hit different in this moment than they did then. John Laurens saying, “We’ll never be free until we end slavery” hits different now than it did maybe five years ago. The reaction in the audience to “Immigrants, we get the job done,” which was a laugh line that became a defiant screen line under the Trump administration. Because it’s a conversation about America, good and bad, I think there’s always going to be stuff that resonates.
When “Hamilton” opened, it proved that hip-hop had a place on Broadway. What is the next barrier for theater to overcome?
Miranda:
Making our audiences as diverse as the cast of “Hamilton,” and making our backstage crews as diverse as the cast of “Hamilton.” I’ve been heartened by the conversations as we discuss systemic racism in our country and in our world, in our corner, our silo that is American theater.
Miranda and Phillipa Soo as Alexander Hamilton and Elizabeth Schuyler in “Hamilton”
What do you think the movie adaptation of “Hamilton” will look like?
Miranda:
I don’t love a lot of movie musicals based on shows because it’s hard to stick the landing. I’m very proud of Jon Chu’s version of “In the Heights.” It is a different animal than the stage production. As long as I think of those as different things, it’s exciting. I don’t know what a cinematic version of “Hamilton” looks like. If I had, I’d have written it as a movie. I know Tommy has the right of first refusal.
Kail:
Oh, we’re negotiating. Okay, good. I don’t know what the narrative feature of “Hamilton” looks like either. But my sense is that — and Lin might have struck on the key to it for me — when you are making an adaptation of a musical that is a movie, it shouldn’t necessarily try to be the stage play. It needs to be free from that, because you’ll fail. That’s something I’m going to be tasked with when I’m being asked to make a movie of “Fiddler on the Roof,” because “Fiddler on the Roof” already exists as a fantastic movie. I’m going to make something that lives alongside that, just like it lives alongside a high school production, a college production, and the original Broadway production, and all of the revivals of it.
And the
performing “To Life” at his wedding.
Kail:
That’s right. That’s actually how I got the job. They said, “Do you have a pitch or a deck?” And I said, “I have this YouTube video that has a lot of views.” It’s the same thing that we were tasked with here [with “Hamilton”]. What is coming out on Disney Plus is a cinematic capture of the stage show, but it’s not the stage show.
What’s the most surprising or exciting offer you’ve gotten to work on since leaving “Hamilton”?
Miranda:
I find it interesting that all of the things I said yes to were learning from people who were making movie musicals at a high level. That’s everything from working with Rob Marshall on “Mary Poppins Returns” to producing “Fosse/Verdon” with Tommy to working with Jon on “In the Heights.” That all felt like prep for getting to direct “Tick, Tick… Boom,” because I’m passionate about musical storytelling. All of the jobs I’ve chosen were like a form of school for me. It was like, “Okay, I wrote a musical that turned out pretty good. Let me figure out how to do this other thing.”
Kail:
When I look at some of the things I’ve made on screen over the last few years — like this version of “Grease” that I did, or the “Hamilton” movie, or “Fosse/Verdon” — I’m making movies about theater, or I’m making movies taken from the theater. So as much as I feel like I’m venturing out from my part of the forest, I really just can’t leave. But there’s work to be done. I want to work to make theater feel more inclusive to the storytellers and the people who are coming to absorbing stories. Ooh, there’s the end of the article. Not bad.

4 Looks That Get Us Excited for Boot Season