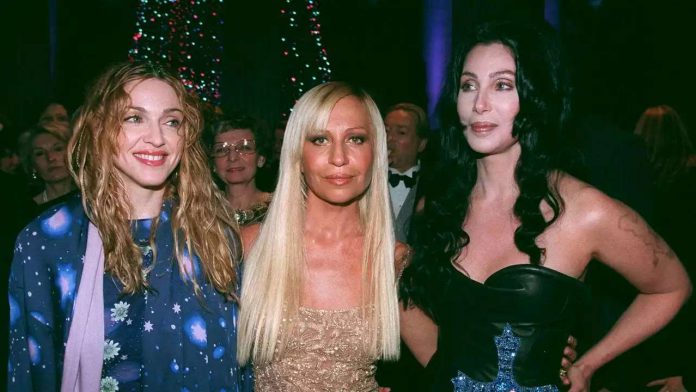 The Met gala of yesteryear includes the likes of Madonna, Lil’ Kim, and Gwyneth Paltrow.

Madonna, Donatella Versace, and Cher at the Met gala in 1997
Photo: Shutterstock
Pre–social media and pre-livestreaming, the Met gala wasn’t quite the star-studded, megawatt event it is today. Let’s just say nobody was being carried in by six shirtless men. It wasn’t until the late ’90s that the event began to boast the megawatt guest list that it is known for today. But the Met gala in the ’90s still had its fair share of incredible outfits, and looking at old photos has become a delicious, curious trip down memory lane. And since the Met gala has been postponed this year due to COVID-19, there’s no better time to look back on when Tara Reid wore a plunging black number or Brandy shimmered in a white skirt suit.
Many of the early-’90s Met galas featured a cohort of supermodels in deliciously minimalist looks. Scroll down in the slideshow, and you’ll spot an image of Kate Moss and Christy Turlington acting coy together in slinky, simple dresses. As the event neared the millennium and the extreme noughties, the looks became more over-the-top.

The Met gala in 1997 included an ode to the late Gianni Versace, and Madonna wore an intergalactic-print shawl and matching dress. Also in the mix was Cher in a body-hugging black dress and Donatella Versace in a slinky gold number. There is a photo of the trifecta posing together.
Another standout was the “Rock Style” Met gala in 1998, when celebrities attended in their most maximalist attire. Gisele Bündchen made a cameo in a bombshell beaded dress; J.Lo, in a decadent fur, arrived with then boyfriend Diddy, who wore a full white look; and Sandra Bullock sported a neckline that dipped down to her navel. But perhaps the most wildly memorable look went to Lil’ Kim, who opted for a bubble-gum-pink bra-and-panties set to show off her rock-hard abs, a luxe fur coat, and snakeskin boots. Talk about an ensemble to remember.
For a bit of Met gala nostalgia, take this time to walk down memory lane and see the 45 best looks from the ’90s Met galas.
Naomi Campbell, 1990
David Bowie and Iman, 1990
Photo: Getty Images

Frenchman Is First in World to Get 2 Full Face Transplants

The Secret to Mastering Acceptance

How Our Family Finds Comfort in a 400-Square-Foot Home