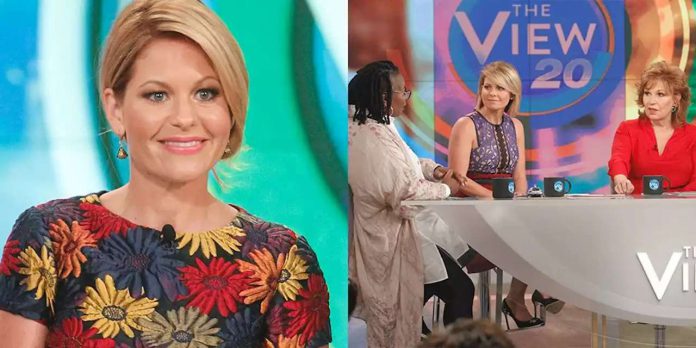 Good Housekeeping
for her May cover story, Candace revealed that she initially didn’t want the job at all.
“The funny thing is, sometimes what you end up doing is what you least expected,” she says.”I never pursued that show, but they pursued me, and it was very unexpected. I tried to say no, I did say no several times.”
(Left to right) Whoopi Goldberg, Michelle Collins, Joy Behar, Candace Cameron Bure, Raven-Symoné, and Paula Faris.
Lou Rocco
The thing is though, she felt like”they wouldn’t let her say no.” As she puts it, it was”one of those things where [it was just] fate.”
In the end, the more ABC pushed and she hesitated, the more Candace felt all the signs were pointing her to give it a try.

“I love to grow and be challenged,” Candace began.”And that’s exactly what it was. So I was up for the challenge and I’m glad that I did it.”
Candace ended up leaving
The View
in 2016, citing her busy work schedule and the desire to spend more time with her family as reasons why. But would she ever do it again?
“I love the talk show format. I will do that again in a heartbeat. But something that’s a little lighter and more fun. Not so political.”
While opening up further about her time on
The View —
which she spent alongside Whoopi, Joy,
Raven-Symoné

Why Natalia Goncharova Is Russia’s Most Important Female Artist

Psychedelic Drugs Could Help With Anxiety and Depression Symptoms