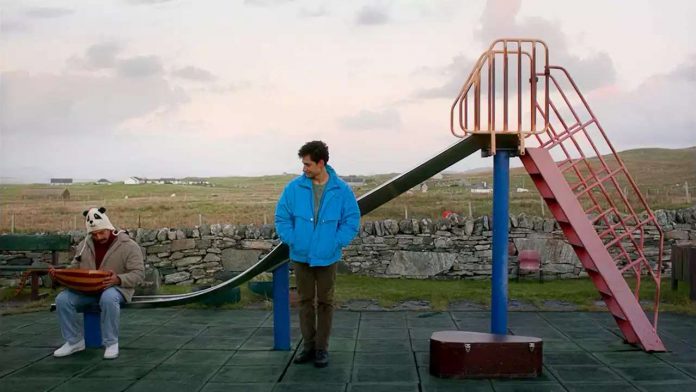 Ben Sharrock’s comic feature — a Cannes 2020 selection taking part in the Virtual Cannes Market — is based on real-life experiences of asylum seekers in Europe (although perhaps not the dance routine).

In the three-minute market teaser for
Limbo
, a group of Middle Eastern refugees sit in stony silence in a classroom while watching a middle-aged and drably dressed couple grind to Hot Chocolate’s 1982 hit “It Started With a Kiss.” The somewhat bizarre and awkward routine is cut short when the bald and considerably shorter male dancer goes too far and grabs the woman’s buttocks — getting a firm slap in the face in response. Behind them, a chalkboard reads, “Cultural Awareness 101 — Sex: Is a Smile an Invitation?”
While many on-screen stories involving refugees are — perhaps understandably — sombre and serious affairs, for Ben Sharrock’s second feature, a
Cannes 2020
selection being sold by Protagonist, the Scottish director decided to go in a slightly more absurdist and comical direction.
The film centers on a group of four Syrian asylum seekers sent to a remote Scottish island to wait for their claims to come though. While in this stasis and unable to work, these flatmates — led by Omar, a talented oud player unable to play due to a broken arm — reflect on the relationships they’ve left behind and try to come to terms with their new identities as refugees. But they also attend these woefully misguided cultural awareness lessons hosted by eccentric locals, binge on the
Friends
boxset and participate in open mic nights (as Freddie Mercury, of course).
While it may look and sound far-fetched, Sharrock says much of
Limbo
’s story was inspired by reality. “These classes — not quite to the same level as in the film — actually go on in Finland and Norway,” he says, adding that he also came across a flirting course for refugees in Germany (led by a man known as Mr. Flirt).
And refugees have indeed been sent to remote European communities, including the Isle of Bute off the Scottish West Coast, where in late 2014 10 Syrian families took up residence as part of a resettlement program.
Perhaps in keeping with the film’s absurd elements, Sharrock chose to make
Limbo
the first feature to ever shoot in Uist, one of the most north-westerly and difficult to get to Scottish islands, which he claims has a “distinct purgatorial feel” he couldn’t find elsewhere.

“Other islands are kind of quaint but Uist doesn’t have that — it still has a very brutal, empty landscape,” he says. “[The production] was extremely difficult, in every sense. The weather was impossible. We were shooting in close-to gale force winds quite frequently and you’d have five guys holding down a lighting stand, which would still be rattling around.”
The unusual tone of
Limbo
— which Sharrock says tries to use its “underlayer of melancholic and deadpan humor” to examine its socio-political subject matter — came partially from the director’s own experiences, having spent a year studying in Damascus just before the civil war erupted, and the Syrian friends he made at the time.
“When the refugee crisis started, the mass media had these representations of refugees. On one side, you had this sort of demonization, like they’re a threat, while on the other, you have this pitying of refugees… and both of those are dehumanizing,” he says. “They didn’t reflect the friendships I had with people in Syria, so I wanted to draw on these characters that are actually truthful.”
With his real-life backdrop having turned so many people’s lives upside down and caused such a great deal of misery, Sharrock had to finely tune
Limbo
to avoid any issues of insensitivity, admitting it was a “very, very difficult” film to write (he also did much of the writing in a small cottage on Uist).
But he says that in doing his research, those he spoke to who had come through the asylum system — and have since read
Limbo
’s script — were “really quite upset” by the media’s depiction of them. He also points to his influences in the Middle East, where filmmakers such as Palestinian director Elia Suleiman react to tragedy through humor and farce.
“We had real refugees in the film, as extras and some with small speaking parts, and there was a very positive reaction to it and to the approach of using humor,” he says. “But it’s a very particular type of humor and tone of filmmaking and I hope what people find — and what I intended — is that the film has a lot of heart. And I hope it’s really respectful to the characters.”

Slideshow 15 Picks for Your Perfect Smoothie

Why Taylor Swift’s ‘Speak Now’ Is Her Best Album