Home Woman Chris Evans and Michelle Dockery on why ‘Defending Jacob’ is more than... 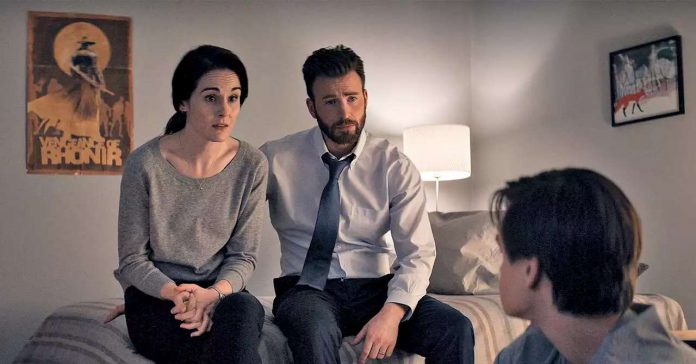 as Jacob’s parents — his defenders, if you will. But when their son becomes the biggest news story in town, their seemingly normal existence is thrown into a blender of accusations, rumors, and curious stares.
“Their lives are completely turned upside down,” Dockery, best known for her six-season run on
Downton Abbey
, tells EW. “The show asks how far you would go for your family.”
That question especially applies to Jacob’s father, Andy (Evans), who is not only an assistant district attorney but also, up until the moment his son is identified as a suspect, part of the team investigating the death of Jacob’s classmate. As the title suggests, Jacob’s parents stand by his side… at least at first. In the first three episodes, viewers see that Andy goes so far as to get rid of the knife he finds in his son’s room. “The entire show is about making these kind of small concessions,” Evans says. “Where do you stand your ground? Where do you acquiesce for the sake of a belief system?”
Although the mystery at the center of
Defending Jacob
is strung together with the kind of precision reserved for the best dramas on television today, it’s less of a whodunit than it might seem on the surface. This thriller is just as much about the toll such an accusation can take on a family, and what happens when parents start to doubt their own child’s innocence.

“Laurie goes through so many different emotions, and the guilt was something that was there in the text,” Dockery says. “Something that was very important to portray is the guilt that you feel as a parent in any situation, but particularly this. ‘Why are we in this situation? Where did it go wrong?'”
Over the course of eight episodes, as the Barber family is put through the wringer, Laurie and Andy will learn just as much about each other as they will about their son, because Jacob’s not the only one with secrets. For example, Laurie finds out that Andy’s father is in jail for murder… and the show’s just getting started.
It’s a complicated tale, so compelling it got Captain America to return to the small screen in his first major television role since 2000’s
Opposite Sex
. (He’s also an executive producer on
Jacob
.) “We’re hoping that it’s the type of thing that forces you to digest and process what you just experienced hours after you watch it. I hope the viewer [is] still thinking about it,” Evans says, adding, “or thinks about it while they’re washing their hands.”
Related content: