Home Woman MTV’s ‘The State’ Break Down Their Zoom Reunion Look Ahead to the... 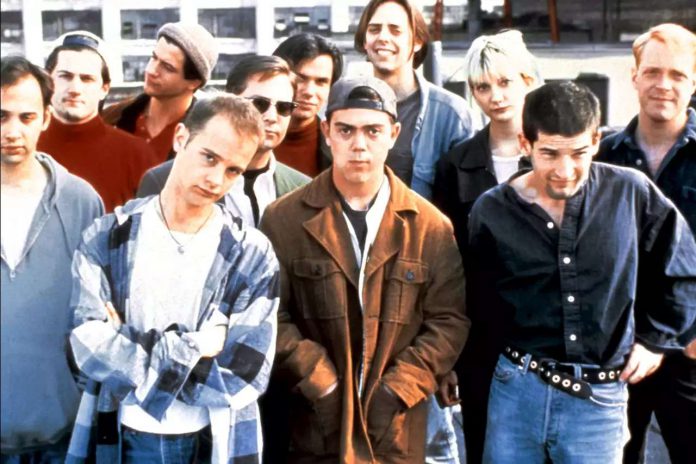 The Bearded Men of Space Station 11
,
and
The Jew, The Italian and the Red Head Gay.
(These names will mean a lot more to you if you happened to be a regular MTV viewer circa 1994). They talked about reviving Michael Showalter’s Doug character (best remembered for his catchphrase “I’m out of here”), but decided against it.
“He said it felt odd to do a sketch about a kid who is being rebellious even though there is nothing to rebel against,” says Kevin Allison. “Kids today have plenty to rebel against, so it felt a little dated.”
Ken Marino had no such qualms about bringing back Louie and his immortal catchphrase “I want to dip my balls in it.”
“It’s my cross to bear I suppose,” Marino says. “For whatever reason, people still remember that character. I thought for this it would be worth doing since it has a lot of energy and everyone is in it and we all act like idiots in it. That’s some of my favorite State stuff.” (Both Doug and Louie were created because MTV demanded
SNL
-style catchphrases and recurring characters, so they came up with the most inane ones possible.)
They went live at 9 p.m. on Sunday June 5th, not knowing quite what to expect. “We were like, ‘Is it going to be 10 people or 10,000?,’” says Marino. “It could have been anything. We wouldn’t have been surprised either way. But we were surprised how many people bought it.”
Over 2,700 people people shelled out for the show. Ben Garant couldn’t make it because he was on vacation with his family at Sequoia National Park, but the other 10 members — which also includes Todd Holoubek, Kerri Kenney-Silver, Thomas Lennon, and Joe Lo Truglio — were there. And it was the rarest sort of reunion, one that didn’t feel like a pale, pointless retread of the past or a transparent money grab. The genuine affection everyone felt for each other radiated from the screen and even Michael Ian Black couldn’t resist breaking into laughter as he redid his old lines from
Taco Man.
“Watching the sketches I was not in, I was like a kid in a candy store,” says Marino.

“I didn’t realize how excited I was going to be, but when I heard Kevin and Black doing
Taco Man
, I became a fan of it. When they finished it and they did
Cutlery Barn
, I was freaking out.”
A moment of State unity like that would have been impossible to imagine back in 1995 when they left MTV for CBS, who yanked them off the airwaves after airing a single special. “They originally told us that they didn’t want to be the
Murder She Wrote
network anymore,” says Jann. “Then Les Moonves took over as president and he was like, ‘We’re doubling down on
Murder She Wrote
.’ It was so demoralizing.” (Just one year later, Dana Carvey had a similar experience when he tried to do another off-kilter comedy sketch comedy show on ABC.)
The group had been together since their college days at NYU at that point, but there was no clear path forward. MTV let it be known they weren’t welcome back, but the pay was so low there (just a smidge higher than they made collecting unemployment) that they didn’t feel like going back anyway. They recorded a comedy record (
Comedy for Gracious Living
) that got shelved and wrote a mock travel book (
State by State with the State: An Uninformed, Poorly Researched Guide to the U.S.
) that was ignored by everyone outside of their rapidly-shrinking cult. “Speaking personally, I thought we had fucked it up so terribly,” says Black. “Totally fucked it up.”
In 1997, Black, Lennon, Garant, and Kenney-Silver signed a deal with Comedy Central to create
Viva Variety.
The others weren’t a part of it and the group totally splintered apart, many of them feeling quite bitter. “There was so much competitiveness and negativity when we were in our early to mid-twenties because we were all just scrambling,” says Black. “We were desperate, both individually and as a group. “
“It felt like a band,” says Marino. “It always felt like a band.”
“It was like the Eagles,” adds Jann, “but with 11 Don Henleys.”
As the years went by, they worked together in small groups on projects like
Reno 911!

The 15 Beauty Products To Grab From Nordstrom’s Anniversary Sale

‘We Hunt Together’ TV Review