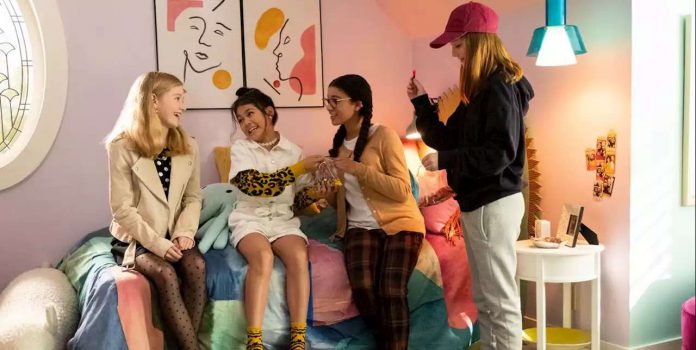 Based on the popular novels of the same name, the show hits Netflix on July 3.

Watching the first trailer for Netflix’s
The Baby-Sitter’s Club
is like injecting your day with two minutes of nostalgic joy. Based on the coming-of-age novels by Ann M. Martin, the series about an ambitious, entrepreneurial group of teens is getting a modern update.
Kristy Thomas (Sophie Grace), Mary-Anne Spier (Malia Baker), Claudia Kishi (Momona Tamada), Stacey McGill (Shay Rudolph),
and Dawn Schafer (Xochitl Gomez) channel their adolescent aspirations into a babysitting business in the town of Stoneybrook, Connecticut. And while the phrase,”It all started at the very beginning of 7th grade…” could incite a flurry of paranoid flashbacks, there’s nothing but optimism in this story of friendship and empowerment.
Kailey Schwerman/Netflix
The five pals set up a phone line that gives clients access to a collective of well-equipped caretakers with just one call.

And although times have changed, the group is still using a landline bedroom phone (courtesy of Etsy) for their business dealings.”It’s 25 years old,” Kristy remarks when sizing up the item.”It’s iconic,” Claudia responds, in a wink to
The Babysitter’s Club
franchise itself. Outside of their babysitting firm, each friend faces her own dilemmas, from unrequited crushes to Kristy’s mother (Alicia Silverstone) getting remarried.
Rachel Shukert
is the showrunner for the series, with Lucia Aniello
(Broad City)
as executive producer and director. All 10 episodes of
The Babysitter’s Club

The reality star took her cue