Home Woman Lessons To Learn From The Last Recession “Adversity Can Be A Catalyst... 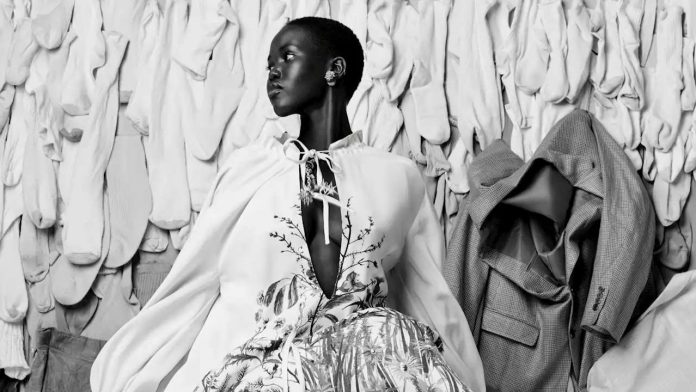 The fallout from the financial crisis “cultivated grit,” writes Harriet Quick. Designers must muster that same fighting spirit now, she says, on the cusp of “a recession that will affect every aspect of the fashion industry, and our way of life”

Pinterest
Picture the scene: we’re sitting at the autumn/winter 2009 Alexander McQueen presentation, “The Horn of Plenty”, held at the Palais Omnisports in Paris. It is a show full of portent. The invitation is a Vermeer-like portrait featuring a woman wearing a plastic bag bonnet. In the middle of the stage is a giant skip, filled with detritus and broken household items (comprising junk and upcycled pieces from previous set designs). The collection takes a leaf from the work of post-war couturiers, featuring Dior-esque New Look skirts and waisted jackets, silk bubble-wrap opera coats and Nylon rubbish sack gowns that nodded to Balenciaga. The models walk on a shattered glass runway. Every aspect, from the Leigh Bowery lips to the exaggerated couture postures is hyperbolic. Waste, excess, greed – it is as if McQueen is laying down the gauntlet and questioning the value of luxury.
The show took place against the backdrop of the 2008 recession. The impact of the crash, signalled by the collapse of Lehman Brothers on 15 September 2008, was fast and violent. As consumer confidence dropped, retailers and brands had to rapidly cut costs, lay off staff, cancel orders and shutter stores. The good times of the early 2000s – characterised by crocodile handbags, crystal encrusted denims, monogrammed everything – were imploding.
Today, it seems the world is teetering on the brink of another major recession. In the UK, in April, the economy shrank 20.4 per cent – a contraction three times greater than the decline seen during the whole of the 2008-9 economic downturn. There is no playbook for the current crisis and no knowing when and how we will edge through to the other side. But it’s clear that a recession will affect every aspect of the fashion industry and our way of life.
Alexander McQueen AW09
© Dominique Charriau
Yet adversity can be a catalyst for creativity. As we saw in 2008, when the going gets tough, fashion designers react with ever more strident, sumptuous collections. There were thigh-slit little black dresses and giant diamante chokers at Balenciaga by Nicolas Ghesquière, crinkled gold linen ribbon fastening column dresses at Prada (gold is considered a good investment in precarious times) and rhinestone-trim T-shirts and ripped jeans at Balmain. There was a “fighting spirit” in evidence.
Read More
The Vogue Verdict On LFW’s First Digital Fashion Week
By
Anders Christian Madsen
The bigger, more overarching trend tilted towards “stealth wealth” and normcore. Both were largely instigated by Phoebe Philo’s debut at Céline. The designer had spent her sabbatical post-Chloé – a period which had coincided with the economic crash – overhauling her own wardrobe and falling in love again with those beautifully made, classic pieces – denim, men’s shirting, a blazer, a trench – that held their value beyond fickle trends. “I had a huge clear out and I was brutal. I just kept the pieces I love,” Philo told British
Vogue
, at the time. “I don’t like to be held back by what I am wearing – there is already so much in life to get on with.” It’s startling how prescient this advice seems today: it is equivalent to what many of us are doing as we reacquaint ourselves with our own sterling pieces and “get on with things” over laptops on kitchen tables across the globe.
The banking crash was also the spark for a period of great innovation. As a new generation of designers including Christopher Kane, Erdem Moralıoğlu, Mary Katrantzou, Victoria Beckham and Roksanda Ilinčić emerged in London, against all odds, and in a volatile market, they established their own independent brands. “I was working all hours and sleeping in bubble wrap in the studio at the Centre for Fashion Enterprise,” recalls Katrantzou. “You run on instinct and make mistakes, but I had a lot of support and I was lucky to be a part of a generation that had great visibility. You have to have that strength of character to think ‘I can learn from this,’” says Katrantzou, reflecting on the lessons of her start-up phase. In 2019, Katrantzou leapt through huge logistical and financing obstacles once more, staging her fundraising “Temple of Poseidon” spring/summer 2020 collection in Athens, in October. “It was one of the biggest challenges I have ever faced but I refused to back down,” says Katrantzou. Now, her efforts are channelled on managing supply chains and orders for her just-launched Mary Mare resort collection, all over Zoom.
Céline Resort 2010
The recession era cultivated grit. It was also marked by a remarkable camaraderie and sharing of information between brands that were run by tiny teams.

Victoria Beckham started her eponymous brand with just three people when she launched her first collection of 10 dresses. Ten years later, the team count is 150. This generation went on to open Mayfair stores, including Erdem’s townhouse in South Audley Street, Christopher Kane’s John Pawson-designed Mount Street store and Roksanda’s David Adjaye-created boutique. British
Vogue
stepped up, too: during this period, support initiatives for young designers by brands including Swarovski were launched and in 2008, the BFC/Vogue Designer Fashion Fund was founded.
“I think it is fundamental that we come together as an industry by literally picking up the phone and making sure we’re sharing developments and insights with one another. I mentor brands through the BFC [programme] and am still open to sharing our best practice as a more established business to younger designers who need guidance right now,” says Jamie Gill, CEO of Roksanda. Back in 2008, before moving into finance, Gill was working in architecture, an industry that subsequently came to a stand still. “Ultimately, we had to accept the reality of what was facing us and understand that our clients (like our partners today) were not against us. Like then, today, we have to find a middle-ground between us, which means compromise on both parts,” says Gill.
Read More
5 Of The Most Exciting Names In Menswear Discuss Going Digital For Fashion Week
By
The excesses of the industry were also stripped out. As the government pursued austerity, CEOs began flying economy class, travel and shoot budgets for fashion magazines – including British
Vogue
– were slashed and jobs were lost. On the plus side, straitened times opened up opportunities. While department stores faltered and relied on constant discounting (today, Neiman Marcus is the latest store to post warnings) elsewhere originality flourished. Adrian Joffe and Rei Kawakubo opened up the original
Dover Street Market
in London, in 2004. The Webster launched in Miami and a slew of direct-to-consumer independent labels with sleek websites and strong community initiatives appeared. With faith in financial institutions shattered, uniqueness, artisanship and loyalty were the hallmarks that helped businesses to flourish in the 2010s.
Looking ahead to the future, there’s a lot of salvo we can adopt from the attitude and resilience developed in the post-recession era. Today, we have the huge advantage of hyper-connectivity. Back in 2008, social-media platforms and communication tech was in its relative infancy. The iPhone launched in 2007, Instagram in 2010, the DTC-selling model was a flicker on the horizon and the influencer economy had yet to take shape. Now, during a period of isolation the accent is on communication and on conveying “human” values, promoting community beyond the hard sell.
How will tough times be reflected in fashion? Lockdown, and the growing numbers who will be working from home as companies re-evaluate the role of the physical office, will keep the emphasis on feel-good ease. Think back to normcore, which grew out of the great 2008 recession; in previous depressions, namely the 1970s and 1930s, there was softness to the look, a taste for layering, monochrome tones and an appreciation of utility items – parachute silk boiler suits, sarong skirts, ponchos, pop over shirts included. What’s for sure is that the last three months has afforded us the time to revaluate needs and desires. The way we carry ourselves, the space we occupy, is now as pertinent as the look we might sport.
Mary Katrantzou SS20
© German Larkin
In many ways, the disruption of the fashion industry in recent years, prompted in large part by climate change, has helped prime the fashion industry for the current crisis – Covid-19 is an environmental crisis of a different kind. Sustainability issues have already put the focus on supply chains and human labour with many companies streamlining processes figuring out how they can still produce and reduce their carbon footprints without denting employment. And, as the Black Lives Matter protests gather pace, it’s also a point when we have all been asked to question: what are my values now and in the future, and who or what do I align with?
What the great 2008 recession did was to inculcate a fluid “growth” mindset rather than one obsessed by “success.” That, perhaps, is the most useful takeaway – apart from the fact that we all need to examine our consciousnesses, reassess our values, and challenge our mindsets.
More from British Vogue:

Sneaking Out for a Burger With My Indian Dad