Home Woman Pooping on the Moon Seems Like a Nightmare 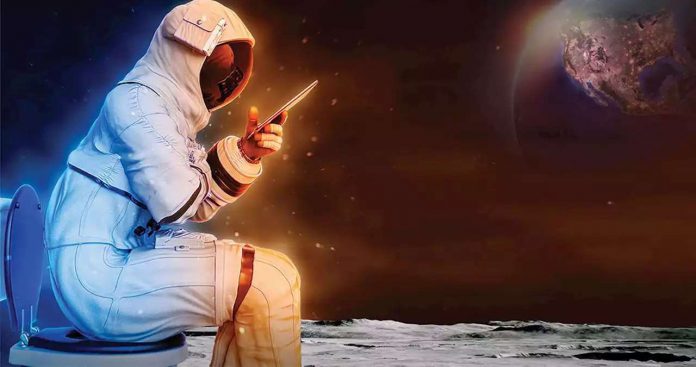 But it’s one NASA is resolved to fix.

Photo: NASA The Moon. For much of human history, she has been a symbol of the divine feminine, the celestial embodiment of emotion, intuition, and time’s natural rhythms. And since 1969, she has been soiled with dozens of little baggies of men’s feces.
Yes, when Apollo 11 landed on the surface of the moon in 1969, the crew left behind Neil Armstrong’s iconic footprint, and also 96 bags of human waste. But no more. The Moon deserves better. To this end, NASA last week launched the “Lunar Loo Challenge,” imploring the citizens of Earth to design a toilet for use in its Artemis Program, whose lunar lander is scheduled to send the first woman and the next man to the Moon by 2024. For the winners, there is a $35,000 prize pool that will be split between the three teams with the best designs, as decided by a panel of NASA engineers. The challenge also includes a junior competition where toilet engineers under the age of 18 can submit their designs.
Previously, using the bathroom aboard a space ship was a complicated affair. The crew of the Apollo spacecraft didn’t have toilets at all. When they had to go, they peed into rubber tubes, and defecated in plastic bags with sticky rims that secured around their butts and then sealed shut.
“It was messy,” Mike Interbartolo, the project manager for the Lunar Loo Challenge who is working on the Human Lunar Lander System at NASA, told the Verge.

“You didn’t have any odor control. The crew hated it. It wasn’t easy to get a good seal on the bag without your buddy having to help. And that’s just not the way we want to go back to the Moon 50-plus years later.”
While space waste-management technology has come a long way since then, designing a toilet that works in different levels of gravity is difficult. NASA has designed toilets that work in zero gravity, like those aboard the International Space Station, but they want the next lunar lander to have toilets that work both in zero gravity and on Moon’s surface, which has one-sixth of the Earth gravity.
The winning toilet, NASA says, must be compact, quiet, and energy efficient, and able to accommodate a variety of human secretions, including period blood, vomit, and diarrhea.
NASA has still not decided which spacecraft it will use for the 2024 mission, and as Interbartolo acknowledges “Going to poop on the Moon is not a top priority, but we don’t want to make it a miserable experience for the crew.”
Nor, hopefully, will it be a miserable experience for the Moon, which has had to sit with a big pile of men’s poo on her face for over 50 years. Please, don’t let her be disrespected anymore.
Sources The Verge

When is the right time to announce a pregnancy?