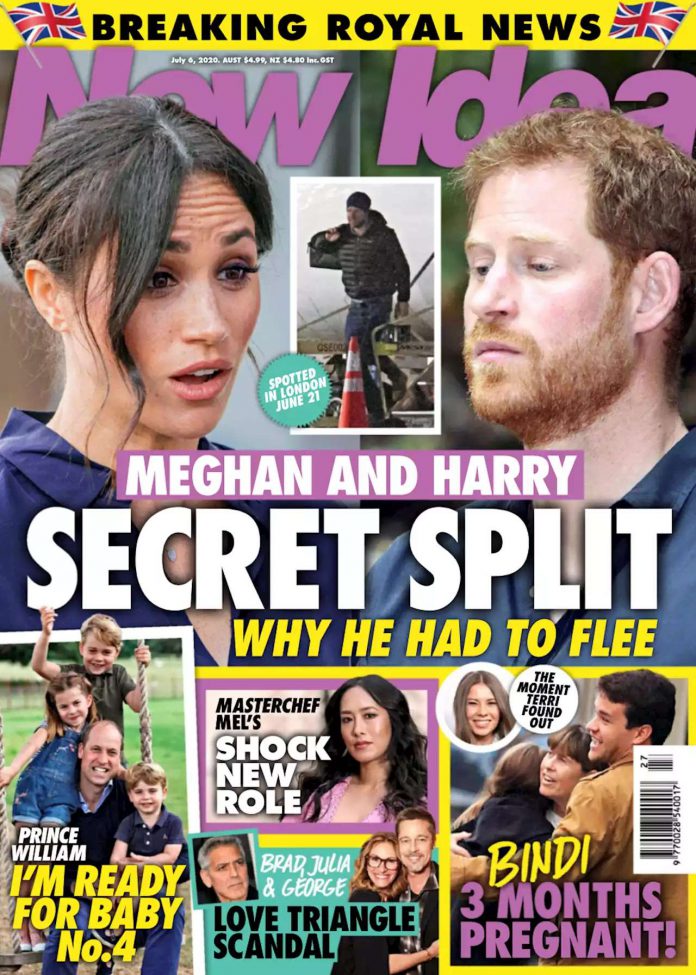 Did Prince Harry leave Meghan Markle to secretly return to the UK? One tabloid claims to have “breaking royal news” to that effect. Gossip Cop can debunk it.

leave
Meghan Markle
to secretly return to the UK? One tabloid claims to have “breaking royal news” to that effect.
Gossip Cop
In its latest bout of wild speculation,
New Idea
is claiming to have heard from a “source” that “rumor also has it that Harry landed into the UK last weekend on a private jet,” leaving his wife and son back in LA. Note that this source doesn’t even state for certain that Prince Harry went the UK, only that “rumor has it.” Accompanying this article is a photo of the prince exiting a plane holding a duffel bag.
The alleged visit came “days after” his father and brother “shared a candid photograph of the two of them to celebrate Father’s Day.” The tabloid notes that Prince Harry was “glaringly absent” from the social media tribute. “Harry would have seen the picture and it must have made him think about what he has done and what he is missing,” Phil Dampier, a frequent royals writer, tells the tabloid. Meanwhile, the unnamed insider finishes by claiming that the “all wish Harry was back for good,” but “the fact his wife and child are by all accounts still in LA, this is looking unlikely.

Hang on, how can this “insider” claim to know that the royals “with Harry was back for good” when earlier in the story all they could report on was rumors? As usual with
, there’s a lot for
Gossip Cop
to unpack here. Besides the fact that this “insider” is clearly either lying or doesn’t exist, there’s this photo of Prince Harry supposedly back in the UK. Looking at the photo, the fact that the duke is pictured wearing a winter jacket and hat should be an immediate red flag – it’s
June
Prince Harry arrived in Canada
to join Markle and officially kick off his life away from the royal family.
Also, there’s that inane bit about the Instagram photo. To clarify: the official Instagram accounts for Prince William and Prince Charles shared the same sweet photo of them together (and it wasn’t candid, by the way), but

Ithaca Could Be The First U S City To Move Forward...