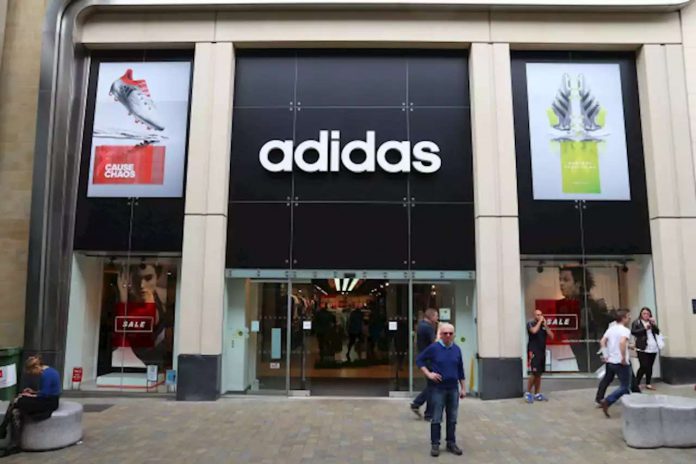 The company’s senior management team has been criticized for weeks by a coalition of employees seeking systemic change.

After coming under fire for controversial remarks made at a company meeting last year, Karen Parkin, executive board member of Adidas AG in charge of global human resources, is leaving the board and exiting the company.
The 23-year company veteran informed Adidas’ supervisory board that she will step down from the company’s executive board and leave the company. The supervisory board in “mutual agreement” with Parkin approved the termination of her executive board appointment Tuesday. Adidas chief executive officer Kasper Rorsted is taking on the responsibilities for global human resources until a successor is named, according to the company.
At a companywide meeting in Boston last year, Parkin said the concerns about how nonwhite and LGBTQ employees were “noise” and that the concerns were only stemming from the sneaker giant’s North American offices. Staffers called for an apology after the fact, but that never manifested, according to project manager for fashion collaborations Aaron Ture, who recently penned an open letter to management highlighting the need for change. He is among the more than 1,600 employees at Reebok and Adidas who have rallied together in recent weeks to demand systemic change at the company. They also had repeatedly called for a public apology from Perkin.
View Gallery Related Gallery Photographer Hannah Khymych’s Quarantine Portrait Collaboration
About two weeks ago she publicly said she should have chosen a better word during last year’s meeting in Boston. That did not measure up with Adidas employees, who continued to ask senior management to investigate the matter with Parkin.
Parkin did not respond immediately to a request for comment Tuesday.
While her departure is “one step forward for the company to hopefully make change for the future,” Ture said he was “very sad” with how Parkin phrased her farewell e-mail to the company. Reading from Parkin’s e-mail, he said, “[She wrote], ‘While I have always stood 100 percent against racism and discrimination, and worked to create a more equitable environment, I recognize that the focus on me has become an hindrance, inhibiting the company from moving forward.’”
Ture said Parkin was phrasing it in a way that suggested the people who brought the issue to the firm’s attention were to blame, “instead of recognizing or apologizing for her past wrongdoings, showing a true change of heart. In a way, they’re trying to deflect the blame of the past weeks onto the very people of color and minority groups and every ally. They are deflecting the blame onto us.”
Describing Parkin’s final e-mail as “a non-apology apology,” Ture said she missed the opportunity to offer further healing.

“It’s very sad that this letter still sounds very much like it’s not her fault. It sounds like we are at fault, which I do not believe.”
Despite that, he said he is hopeful that there is now room for change and that a better person will succeed Parkin.
Adidas’ senior leadership team has been dealing with a good amount of controversy. More than a month ago Black employees at Adidas criticized the company for the lack of support toward them and the greater community. In a matter of days, a coalition of employees joined to call for significant changes.

Parkin’s departure is the latest of what have been several responses to employees’ call for change. On June 5, Adidas responded by acknowledging “we have not done enough and we’re dedicated to doing more.” A few days later Adidas revealed plans to invest $20 million in programs that support the Black community.
The company issued this statement Tuesday: “Adidas and Reebok have always been and will always be against discrimination in all forms and we stand united against racism.” A company spokesman said the company would not comment further.
But in addition to a press release, the athletic conglomerate’s recent diversity-oriented initiatives were highlighted in an e-mail. Adidas’ efforts include setting up an international committee to accelerate inclusion and equity and signing the Juneteenth Pledge, which calls for companies to make June 19 a paid holiday for U.S. employees and to identify a relevant day in international offices to recognize the emancipation of enslaved people in their country.
In addition, the company has committed to ensuring that a minimum of 30 percent of new positions be filled with Black and LatinX talent. There is also a target that 50 percent of all openings will be filled with talent inclusive of all genders, sexual orientations and disabilities. Part of the initiative includes ensuring veterans are considered in new hires. Adidas aims to have 20 to 23 percent Black and LatinX employees in corporate roles by 2025 and 12 percent in leadership roles in the U.S. Adidas is putting in place a program to ensure fair and equitable hiring.
On another front, the company is investing $120 million toward U.S. efforts to end racial injustice and to support Black communities through 2025. Adidas is also developing new U.S. Anti-Discriminatory and Harassment Standards, which will be governed by a third-party investigator.
Parkin joined the company in 1997 as sales director for the U.K. For the past five-and-a-half years, she has overseen global human resources and she was appointed to the executive board in 2017.

Does your baby or toddler hate their high chair? Here’s what...

Youths! Go Listen to Your Elders!