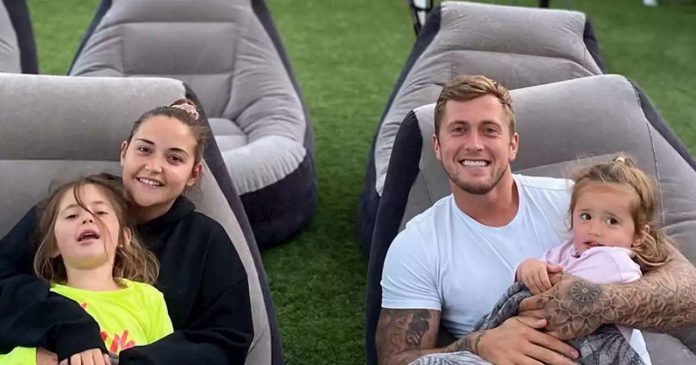 Former TOWIE star Dan Osborne celebrated his 29th birthday on the weekend with an outdoor cinema party surrounded by friends and family.

This weekend was one of celebration for the Osborne/Jossa household as Dan Osborne turned 29 years old, and his daughter Mia, whom he shares with his wife former EastEnders star Jacqueline Jossa, turned two last week.
To mark the special occasions the family threw a lavish outdoor cinema party in their back garden, complete with popcorn and blow up cinema chairs.
Let’s take a look at what went down…
Get exclusive celebrity stories and fabulous photoshoots straight to your inbox with OK’s daily newsletter. You can sign up at the top of the page.
The former TOWIE star first shared a snap of the garden decorated with gold blue and purple balloons, alongside a gold hanging curtain to take photographs in front of as well as large perspex number two filled with balloons.
Dan captioned the image of himself holding Mia, who was dressed in a dark purple party dress, writing, “Our birthday weekend”, along with a heart emoji and a party popper emoji.
He then continued: “Thank you to absolutely everyone that wished me and my beautiful Mia a happy birthday. Thank you to everyone that made our weekend so special. Love you all guys”
The event itself looked both cosy and fun, with the couple thinking to shelter the garden with gazebos meaning the event could continue despite the temperamental weather conditions.

The space was also decorated with colourful bunting and their was candle lit lamps around to give the space and ambient glow.
The family, which also includes Ella, five, and Dan’s son Teddy, six, was there as well as some of Dan’s friends and their kids.
First, as many men under 30 would do, Dan made use of the giant screen in his garden to play some Fifa with his mates.

But as day became night the screen played host to family friendly film The Incredibles; something that both adults and children can enjoy.
The famous couple shared snaps of them all snuggled up outside watching the movie.
Although the family chose a kids’ film, Mia’s main celebration was earlier last week, with an Aladdin themed party complete with stunning cake.
On Dan’s birthday, which fell on the Saturday, Jacqueline uploaded a series of sweet snaps of her husband to Instagram, including one of the entire family in a hot tub.
She captioned the image: “Happy birthday mr @danosborneofficial 29.”
“Swipe to find mr in a lovely shade of red lipstick We love you daddy! Let’s have a great day,” alongside a string of emojis.

CGI Models and Zoom Campaigns How Designers Are Getting Creative in...