Home Woman Froth Feathers Fluff The History of the Boa 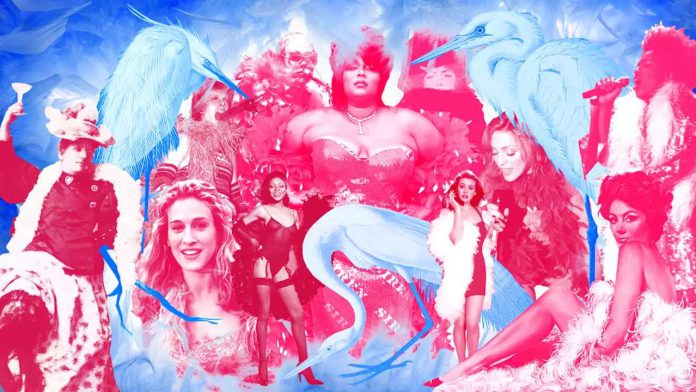 Like many high school girls living in the early 2000s, I thought there was no higher fashion power in the universe than Carrie Bradshaw. I remember watching an episode from the first season, one of those frantic, self-encapsulated episodes that tells the whole story of a relationship in one 30-minute chunk. Carrie meets a Parisian man with a charming accent and a beautiful Roman nose; they go on a date; he leaves while she is still asleep. She awakes to an envelope full of money on the bedside table: one thousand dollars, cash.

Of course, Susan Sontag included the feather boa in her 1964 essay
On Camp
, alongside other ornate things I really like, including Tiffany lamps and Aubrey Beardsley drawings. For Sontag, the Gilded Age seemed to be the very apex of camp. Or maybe it’s that our appreciation for fin de siècle aesthetics would always feel a bit off-kilter, a bit campy, a bit gauche and dumb. The few times boas have returned to the spotlight, it tends to be in contexts either self-consciously playful (like Alicia Silverstone, dressed in bright red mini dress and a white feather boa, holding a chunky cellphone, standing atop the word
Clueless
the boa wiggled with subversive power
. The 1930s were the heyday of Mae West’s film career, but her sexed-up persona was an imaginative recreation of the racy late 19th century—and as she vamped her way across the screen, cracking assertive one-liners, she was frequently swathed in feathers. And too, the boa has long been an iconic object in the drag community going back decades—all the way back to drag balls of the sort West featured in
The Drag
, one of her many controversial productions. Drag queens have long wrapped themselves in brightly dyed feathers as part of their performance. But until recently, drag was an art form that remained firmly located in the subculture, rarely crossing into the mainstream.

There was a moment in the ’90s when the feather boa felt just weird enough, just funny enough, to be considered cool (occasionally Kurt Cobain liked to wear one on stage). But that moment passed without too many people hopping on board. New York streets didn’t teem with feathers; Bradshaw walked alone.
But maybe feather boas could make a comeback in this wild and unpredictable time, when things feel unreal and all too serious and we’re craving a little madness, a little fluff. I think the time might be ripe. We’re seeing a revival of all things ’90s. Even the more questionable trends (oversized overalls, neon green high-neck tanks, yin-yang symbol earrings) have made a comeback. These are all objects I never thought I’d like, things that I wore in elementary school, if ever, and yet after seeing them on numerous funny TikTok teenagers, I’ve started to think they look kind of cool, maybe? Good? Could the right sassy 19-year-old make feather boas a thing? And, too, drag culture is more ubiquitous than ever, with boa-draped queens posing on the
of magazines, glamorous testaments to the transporting glory of feathers.
An attempt to set the Guinness World Record for longest feather boa, 2019.
Image

37 Gorgeous Summer Desserts That Just Happen To Be Gluten-Free