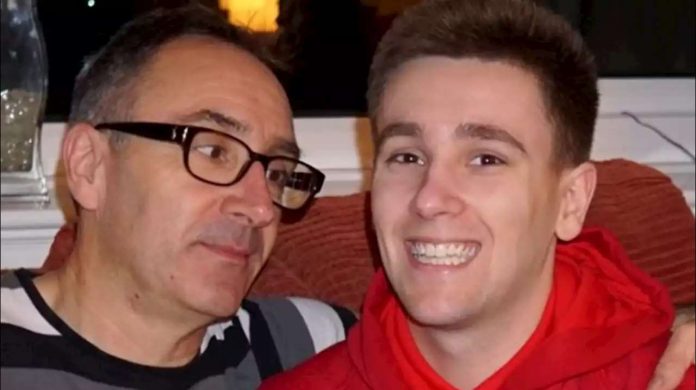 UK dad Stanley Greening says his 24-year-old son died after being furloughed due to the coronavirus and slipping into the virtual world of gaming.

after his son fell into a rut after being furloughed because of the
coronavirus
.
In his Facebook post, Greening opened up for the first time publicly about his son’s untimely passing.
“On 3rd June something so awful happened, the worst imaginable thing to happen to such a young man and the worst imaginable thing to happen to a parent,” Greening wrote.”My son, my dear boy, Louis, has gone. Not from the evil virus but because of it.”
Advertisement
O’Neill was one of millions who were furloughed in March, as the economic impacts of the pandemic swept through the UK.
According to his dad, his son suddenly being without work was like having the rug pulled out from under him.
“His young life, barely begun, still trying to find his feet, just torn away,” Greening wrote.”The devastation … after seeing my dear boy go like that, I am in a living hell.”
From his own words, it’s clear that the UK dad blames one thing and one thing only:”This damn lockdown.”
The heartbreaking irony is that although Greening might have thought his son was safer at home, away from the rapidly spreading coronavirus, he wound up being more at risk for something else entirely. Something many people may not even realize can happen to them.
After being furloughed, Greening says his son”took to his gaming world to escape.”
But in the end, his father said that very world is what took his life.
“Caught up in a virtual world he became less active, so easily done,” Greening continued.”Hours fly by when absorbed by the screen, I’ve done it countless times myself. But no one, and I mean no one, ever in a million years would have predicted a blood clot. And just like that, it ripped my son away and I died inside along with him.”
O’Neill died of deep vein thrombosis — a serious condition that arises when a blood clot forms inside a vein deep within the body.
Blood clots of this kind typically form in a person’s thigh or lower leg, though they can also develop in other areas too, like the neck, shoulder, or arm,
according to Healthline
.
DVT can occur as the result of injury, surgery complications, or issues with medication. Other times, it results from long bouts of inactivity, when limited mobility restricts blood flow and blood begins collecting in the legs or other extremities.
This, Greening said, is what doctors believe happened to his son.
In an interview with the BBC, Greening says that his son was furloughed within a week of the lockdown, and was perfectly happy at first.
“He was quite jolly and said ‘I am going to enjoy a bit of this,'” the dad recalled in the interview, according to the
Daily Mail
.”Louis has always enjoyed his games. He was chatting to his friends and I think he found some comfort in that. He had his friends on line. He had a virtual world to exist in during the nightmare that was going on outside.”
But as the days turned into weeks, a new and problematic pattern was quickly emerging.
“Hours would go by,” Greening said.”I couldn’t say how long he was on the computer. There were times when I would get up in the morning and go down stairs for breakfast and he would be up and I would would realize he had been up all night.”
Looking back, Greening said his son would probably play for six to seven hours at a time, with few breaks in between.

“He was sitting there all day,” the father said, adding that his son soon put on a bit of weight in addition to his mood changing.
Before long, it became harder and harder to get his son to do anything other than sit in his room.
“I was encouraging him to come out with his little sister. He would say yes. He came out a couple of times to the shops, but it sort of fizzled out and he got a bit down,” Greening told BBC Radio,
Daily Mail
.”I couldn’t make a 24 year old go out. I was nagging him and he was getting upset with me. He was saying leave me alone.”
Just two weeks before the young man’s death, his dad remembered getting up early one morning just after 5.
“Dad can you help me?” his son asked him.”I have not been feeling well.”
“I helped him upstairs. He was approaching his bed, his weight was falling,” his father remembered.”I caught him and put him on the bed and he passed out.”
After shaking his son awake, Greening picked up the phone to call the UK’s medical information hotline.
The operator on the other line suggested it was food poisoning, though his son did mention at one point that his leg was bothering him.
The symptoms seemed to pass — until around 10:30 p.m. June 3. That’s when Greening’s wife found their son bent over on the top of the stairs and had to help him to his bedroom.
“He sat on the floor against the bed and said: ‘Dad what’s happening to me?'” Greening told the BBC.
Moments later, paramedics arrived, but it was already too late. O’Neill died at home, becoming just one of what his father now refers to as the”hidden victims during the lockdown.”
Now, the grieving father is making sure that his son did not die in vain.
By speaking out, Greening hopes that his son’s death serves as a sobering warning to others just like him who may be stuck at home because of the pandemic.
“Who is warning youngsters?”
Greening wrote
.”Who is warning anyone, of any age? No one!! So I am. My son will live on, I shall continue to spread this warning in his name.”
Most of all, he wants others to know that DVT can happen to anyone — at any age — regardless of whether they are healthy.
“This terrible thing was preventable had he or we known such risks,” the father wrote.”It is very rare in such circumstances but speaking to medical professionals I discover there has been a number of cases in youngsters during this lockdown. Like many I associate it with older people and something we are warned about on planes!”
Right now, with millions staying inside to avoid the virus or finding themselves out of work, the risk of DVT remains very real.
“As more and more of us are working from home it is likely you are not getting out your chair as much as you need,” Greening noted.
But his message to those of us who find ourselves in this position is simple:
Keep moving
— as much as possible.
“Stand up, walk around, and please, warn your kids,” Greening pleaded. ‘If I can prevent one loss in my son’s name then that’s one bright light that will shine on LOUIS. So STAND UP, for Louis.”
Share this Story

Opinion Why I decided to take the word chief’ out of...

The VFX Clues in the Perplexing ‘Cats’ Trailer