Home Woman Jarvis Cocker Will Never Give Up on Pop 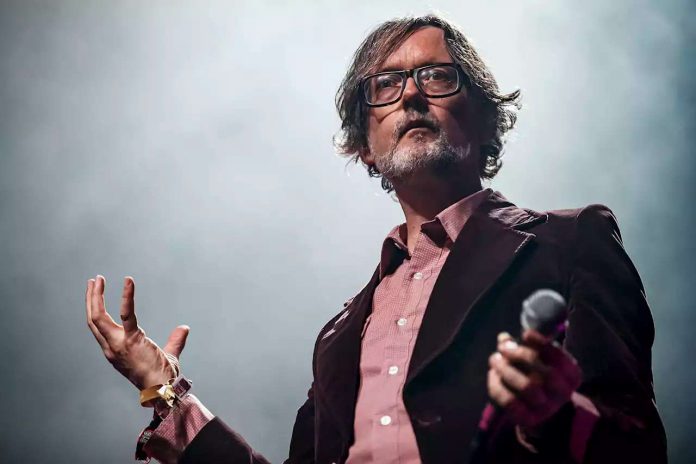 Ahead of new LP ‘Beyond the Pale,’ the singer talks Pulp’s legacy, screaming Billie Eilish fans, and his accidental quarantine anthem

Good Pop, Bad Pop
. The singles charts were like a democratic process — the public did really take notes and get personally invested. Weird left-field things would suddenly become a hit. Laurie Anderson would get to Number Two with “O Superman.” It gave you hope because people from different backgrounds would latch on to quite a strange song. Especially now, where everything seems to be about polarization, I like the idea of a unified thing where people can agree. Dance music’s a good example. It’s the wedding-reception effect: You’ve got kids and old people and they’re all dancing to “Night Fever” by the Bee Gees or “Dancing Queen” by Abba. People realize how much we have in common.
At the
Pulp reunion show
in NYC, this couple near me was kissing and singing along to “Something Changed.” It was surprising because in some ways that’s a really dark song.
That’s the one Pulp song that seems to crop up. I’ve been stopped by a lot of people who tell me that song was played at their wedding. They walked down the aisle to it!
Our big hit in the U.K. was “Common People,” and
in the wake of that
, there was pressure to re-create it. But it always becomes diminishing returns. I think everybody knows at heart that good ideas just come from nowhere. That’s what’s frustrating about pursuing a life in music. But also, if you’re honest about it, it’s what keeps you doing it. Because you never know what’s ‘round the corner — there’s always the chance that something magical is going to happen. Sometimes you might think, “Jesus Christ, come on — hurry up! Magic needs to happen
soon
!” But it’s slippery and unpredictable. So trying to re-create things by formula is never going to work. You’ve just got to set off in a direction, and if something exciting does start to happen, pay attention and make the most of it. That’s all you can do.
Do you keep up with younger pop stars?
The only modern pop star I’ve experienced at close quarters recently — we were playing the festival in Ireland called Electric Picnic, and Billie Eilish was there. As it was getting ready for her stage time, there was this high-pitched sound like [
Screeeech
]. I thought they had an intro tape going. Then she came out and this sound got louder. I thought, “Surely they should turn the intro tape off?” Then I suddenly realized it was prepubescent girls screaming. You know that sound on
The Beatles at the Hollywood Bowl
? I’d never, ever heard that in real life. I’d heard it on documentaries, about the Beatles or whatever, but I’d never been in a crowd when that happened. I was quite impressed. Her songs didn’t sound like conventional structures — they sounded a bit more interesting.
I don’t like pop when it’s too slick and choreographed. You can almost hear them counting the steps under their breath. A real turn-off, that. I like to feel that someone is in some way transported by what they’re doing.
You developed the new songs by playing them live. How did that project happen?
I got asked to play a concert in Iceland, but I was going to turn it down because I didn’t have a band anymore. Then I just decided to get a band together really quickly. But I realized this is what I should’ve done from the start, because that’s how you finish songs off — you have an idea, you bring it to the band, then they add their thing to it. I don’t know why I’d forgotten that. It’s weird because I’ve done it most of my life.

But the exciting thing for me with this record was playing songs live and finishing them in public, if you like.
You’ve always been an unabashed live showman.
It was a big leap for me to go onstage at first, because of being quite a shy kid. When I first performed, I didn’t move much. I discovered it one night when my guitar broke. I had a fit and squirmed around the floor, which was really embarrassing — a tantrum, basically. But people clapped. I realized, “Oh, right. So being onstage isn’t about playing the right notes in the right order. It’s also about
performing
.”
Onstage, when it’s going well, you can feel the music moving through you, and you can act it out. Just like all those years dancing in this dingy nightclub in Sheffield. It’s a chance to turn your mind off. People used to call disco music “mindless boogie.” But I never thought that was an insult, because it’s like a meditation thing. Everybody’s into mindfulness apps, but just go and dance for two hours and you’ll experience that same cleansing of thoughts, concentrating on a rhythm and keeping in tune with that. You’ll get those same benefits, plus some exercise as well. You don’t need a wellness app.
You’re doing that with things like “Domestic Disco” as well. It’s inspiring to see artists figure out creative ways to adapt to the new reality.
Yeah — that’s why I wanted to do it. I think music can be helpful when there’s so much information coming from different places. If you were to watch the news all the time, you would probably have a nervous breakdown. So the ability to just lose yourself in some music for a while is important. That’s tuning in to the roots of why people like music and what music was even invented for in the first place — to transport us somewhere, so we can come back to the world refreshed.
On the other end of the scale is the “Bedtime Stories” thing I’ve been doing, which is where I’ve been posting a bedtime story at 9:30 on Sunday evenings. When the lockdown started, I had a bit of trouble sleeping, and I’ve always found that listening to a story has helped with that. I’d always liked Ray Bradbury when I was a kid, and then I found a collection of his — I hadn’t read it for ages. I read this story called “Powerhouse.” It’s about a couple riding across the desert. The weather turns bad. They’re looking for shelter. They come across a power-generating place and they decide to stay there for the evening. I’ll stop there because I don’t want to spoil it, in case you want to read it yourself. But it’s a meditation on the nature of electricity and how it connects everyone, and that seemed appropriate for this current time where we’re so dependent on networks of communication. If Zoom didn’t exist, would we still be able to talk to each other, to keep family ties going?
But weirdly, by all being separated from each other, people have found creative ways to communicate and help each other out. We have a lot of frustrations with the way the governments have dealt with it — especially, I imagine, over there, where you’ve got a leader who just seems to be completely deluded. But when everybody went on pause globally, people had to re-evaluate what was necessary in their lives and what they could do without. And I guess the thing people realized they couldn’t do without, in the end, was other people.
In This Article:

It Looks Like Jed Wyatt Cheated on His Ex Girlfriend Before...