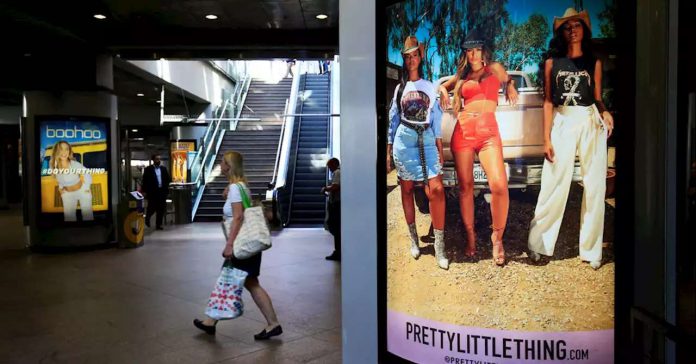 Boohoo was one of the fastest-growing retailers in Britain. Now the company is in trouble after revelations about working conditions in supplier factories.

linked to working conditions in its factories that supply fast fashion retailers
.
The town, which has a large South Asian immigrant population, has long been a center for clothes manufacturing. Its dark factories have been described as an “open secret,” well known in both the industry and government, and were documented in
published in 2018.
What did the company say?
Boohoo told The Sunday Times that it was investigating the claims and that the factory in the story was not a direct supplier. It also said that it would terminate its relationship with any suppliers that were found in breach of its code of conduct.
On Wednesday, the company published
a further statement on its website
, saying it would begin an independent review of its British supply chain, invest $12.5 million in “eradicating malpractice” in any supplier factories and step up its use of third party auditors.
“As a board, we are shocked and appalled by the recent allegations that have been made and we are committed to doing everything in our power to rebuild the reputation of the textile manufacturing industry in Leicester,” the Boohoo statement said.
The company said it would report on its supply chain review in September, when it publishes its half-year results, with further updates in January 2021.
Asked for comment by The New York Times, Boohoo did not supply any additional information and referred a reporter to the statement on its website.
What was the reaction?
Between the infections spike in Leicester and the fact that the allegations involved British factories, the impact of the week’s revelations about Boohoo has been considerably larger than most fashion supply chain investigations.

The increase in infections and the new information have prompted both a government response and volatility in the stock market.
Priti Patel, Britain’s home secretary, described the allegations as
and asked the National Crime Agency to investigate “modern slavery” in Leicester’s clothing factories.
This week Boohoo’s
market value plunged by more than £1.5 billion
, or $1.89 billion, in two days. Boohoo is now worth a third less than it was on Friday afternoon, before the supply chain allegations wiped more than £1.5 billion off its stock market value. Some retailers, including Next, Zalando and Amazon, say they plan to pull Boohoo clothing from their sites.
How did customers respond?
There was a considerable reaction on social media, led by several influencers who had formerly been faces of Boohoo brands. The company has 12 million Instagram followers and spent more than £90 million on marketing last year.
In
an Instagram post
, Vas J Morgan, a former collaborator, said: “Slavery is slavery and my heart hurts for the families that have suffered at the hands of companies that fail to do due diligence like this. Companies that make billions off the back of hard working people trying to feed their family.”
Advertisement

Learning to live well with a persistent illness – Harvard Health...