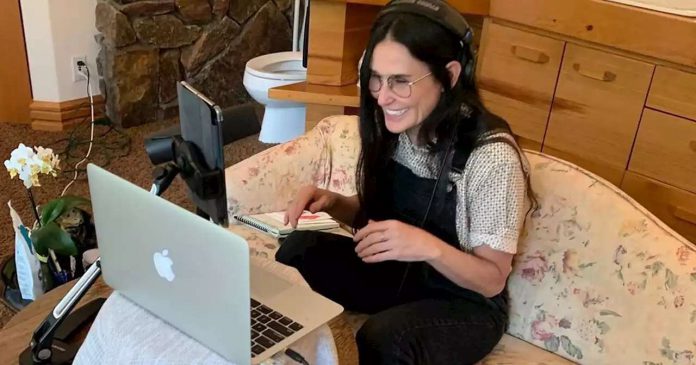 When it comes to celebrity homes, many of us have likely come to expect that they are incredibly modern and luxurious.
A touch of marble here, a grand staircase there… you get the picture.
But it seems Demi Moore’s home might not be quite what you’d imagine it to be.
The 57-year-old actress appears to have given fans a glimpse inside her bathroom while sharing a behind the scenes look at the new Dirty Diana podcast she’s been working on.
Moore, who has starred in films such as Ghost and G.I. Jane, took to Instagram to share two photos of herself working on her laptop while sitting on a sofa inside a bathroom.
The images quickly went viral and it’s fair to say people on social media had a lot of thoughts about the set up.
The first photo shows Moore sitting on a small sofa in a brown carpeted room, a toilet and a sink behind her.
The second, taken from over her shoulder, shows the other side of the room, where there is a large tiled bathtub set into the floor and some kind of statue next to it.
Many people couldn’t seem to work out which part of the room they found the most bizarre – the carpet or the sofa.
One person said: “Lol… I thought this was your sitting room, then I saw then I saw the toilet and in picture two the tub. You have a couch in your bathroom.”
Another simply wrote: “This is horrifying.”
Someone else commented: “Refuse to believe this is actually her bathroom.”
“I’ve seen partially carpeted bathrooms before (area around the plumbing is tile and vanity/dressing area is carpeted) and like that’s pretty weird but the couch is truly psycho s**t,” replied a different user.
A fifth person added: “The whole set up makes me wince every time I spot something new and even more horrific than the last spot. Fun times.”
“This has disturbed my soul in ways I never knew possible,” responded a sixth.
However not everyone was against the room, with some praising the photos.
“I love that you are working in your bathroom,” said one Instagram user.
A second proclaimed: “I need a couch in my bathroom!!!!”
“Honestly??? Genius in the way that now it’s a shorter distance to lay on that couch in your towel for hours instead of walking all the way to your bed to do the same thing,” added a fan.
Moore has not yet responded to any of the comments about the photos.
Do you have a story to share? We want to hear all about it. Email us at yourmirror@mirror.co.uk

18 Non-Basic Jackets You Can Wear Through Summer