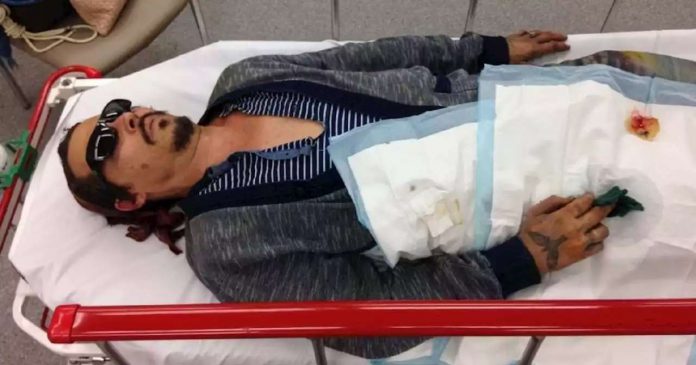 Movie star Johnny Depp has returned to London’s High Court for a third day giving evidence in his libel trial against News Group Newspapers over a story published in The Sun in 2018. Depp was labeleled a ‘wife beater’ – which he denies

Johnny Depp has told a court he used his mangled finger to write a message in blood after severing the digit during a row with Amber Heard.
The movie star, 47, is giving evidence at London’s High Court on the third day of his libel case against News Group Newspapers.
Depp is suing NGN over a story published in The Sun in 2018 which branded him a “wife beater” – a claim which he strenuously denies.
During today’s testimony, Sasha Wass QC, for NGN, asked Depp about an argument he had with ex-wife Heard during a 2015 trip to Australia, where he was filming a Pirates of the Caribbean movie.
The court heard the pair became embroiled in a heated row at the house they were renting, during which Depp suffered a severed finger.
A picture of a message scrawled in blood on a mirror was shown to the court, with Depp admitting he used his severed digit to write the note in blood.
Ms Wass told the court: “These [pictures] are of the house – you had written on a mirror. You had dipped your injured finger in paint to write the graffiti.”
Depp than clarified that the message was written in his own blood, adding: “Yes I started using the blood from my finger…
Ms Wass asked: “The damage to your finger was very serious, wasn’t it? And very painful?” adding: “It was hours and hours before you called for any help.”
The lawyer claimed Depp had lost the tip of his finger while smashing a plastic phone against a wall repeatedly while rowing with Heard.
Depp denied this version of events, telling the court: I didn’t spend much time on the phone.”
He has previously alleged his finger was severed after Heard threw a glass vodka bottle at him during the row.
During today’s testimony, Depp said of the injury: “I had just lost the tip of my finger and as a musician it’s a little upsetting when you see the bone sticking out.”
Depp was treated in hospital for the injury, and a picture of him lying on a gurney had previously been presented to court during the opening statements.
The actor went on to claim he’d lied to staff at the production company making his movie about how he’d suffered the injury.

He told the court: “At the time that I had to give the news to the production company that I wouldn’t be working the next day, I lied to production and to anyone who had anything to do with production, I told them I had slammed it in a door. To protect Ms Heard.”
During her cross-examination, Wass claimed Depp had violently attacked Heard during the fight – alleging he grabbed her by the throat, spat in her face and threw her against a fridge.
Depp denied being violent towards Heard during the row.
Yesterday in court, Depp addressed allegations he attacked his ex-wife in a rage on a private jet over claims she had an affair with her co-star James Franco.
The actor denied he’d slapped, kicked and screamed at Heard during the heated row in front of staff on the aircraft.
He also denied claims he’d held one of the couple’s pet dogs out of the window of a car following a cocaine binge.
However, he admitted laughing about microwaving one of the pet pooches as part of a “running joke” with his ex.
The court was also shown a candid picture of the actor lying on the floor of a bedroom, with Ms Wass accusing the star of having “passed out”.
Depp insisted he was just “sleeping” while other shots shown during the case included a shot of a kitchen work top and a glass table covered with lines of white powder.
During yesterday’s testimony, text messages between Depp and his pal Paul Bettany were read to the court including one in which the Pirates of The Caribbean star joked about “burning” Heard and “f**king her burnt corpse”.
Another text, which Depp sent to his former assistant, joked about him leaving a poo outside Heard’s door and blaming it on their dogs.
Johnny Depp libel trial latest Depp has denied he was ever violent towards his ex-wife and has accused her of abusing him during their marriage.
Lawyers for NGN are defending their case based on Heard’s 14 allegations of abuse, which include claims of bust-ups between 2013 and 2016.
The actor has argued his ex-wife was abusive towards him during the marriage, which collapsed in 2016.
The case continues.

Would This Extremely Normal Abortion Scene Fly in 2019?

What Happened When This Man Ran Every Day for 9 Months