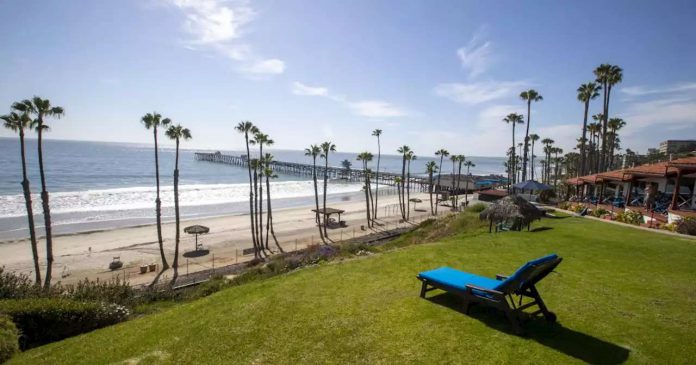 Some Southern California beaches are open, while others — including in L.A. County — remain closed during this weekend’s heat wave.

closures or severely limited access
at hundreds of beaches, parks, trails and forests, though policies and enforcement vary.
L.A. Police Chief Michel Moore called on Angelenos to resist the urge to head for forbidden beaches and trails as temperatures are expected to surpass 90 degrees in the coming days.
“Avoid those nonessential activities,” Moore said. “Save the awkwardness of us having to admonish you.”
As an alternative to outdoor spaces for those who need to escape the heat, county officials opened emergency cooling centers, which will operate from noon to 6 p.m. Saturday.
Advertisement
In a news release Friday, officials emphasized that the cooling centers are for vulnerable populations, including older residents and those without air conditioning.
Visitors are required to wear a face covering and practice social distancing. .
The centers are located at Lincoln Heights Recreation Center, Colonel Leon Washington Park in South Los Angeles, Whittier Community Center, Mid-Valley Senior Center in Panorama City, Robert M. Wilkinson Multipurpose Center in Northridge, Sherman Oaks East Valley Adult Center, Jocelyn Center in Alhambra, Buena Vista Library in Burbank, Robinson Park Community Center in Pasadena and El Cariso Community Regional Park in Sylmar.
Orange County
Advertisement
Orange County officials debated closing beaches and hiking trails during the heat wave after coastal residents raised concerns about out-of-towners descending on their communities in droves.
Since surrounding counties have completely shuttered their beaches, Orange County has been inundated with people from L.A.

and San Diego counties and the Inland Empire, Supervisor Lisa Bartlett said this week.
Officials ultimately decided to keep beaches open but left in place parking restrictions that will reduce access. Some cities, including Laguna Beach and Seal Beach, have closed the stretches of sand in their jurisdiction.
Officials in San Clemente voted this week to begin allowing “active recreation,” i.e., no sunbathing, at city beaches and coastal trails this weekend. Parking access will be limited, however.
Advertisement
Laguna Beach beaches remain closed.
San Diego County
lifted restrictions on ocean access
, paving the way for cities to reopen their beaches as soon as Monday.
The change reopens the ocean to swimming, surfing, kayaking and paddleboarding. It does not apply to state beaches, and parking lots will remain closed.
Advertisement
Group activities and boating will remain banned. While residents can walk and run along the beach, they cannot sit or lie down.
Ventura County
its hard closure on parks and beaches this week in an effort to help residents stay mentally and physically healthy amid the pandemic.
Under an
amended ordinance
, residents can now access the city’s beaches, pier, promenade and parks as long as they keep their distance from one another and remain active. People can walk back and forth on the pier or the sand but are not allowed to sit down or stand against the railing to fish, for example.
Advertisement

Where are all the winners of Big Brother now?