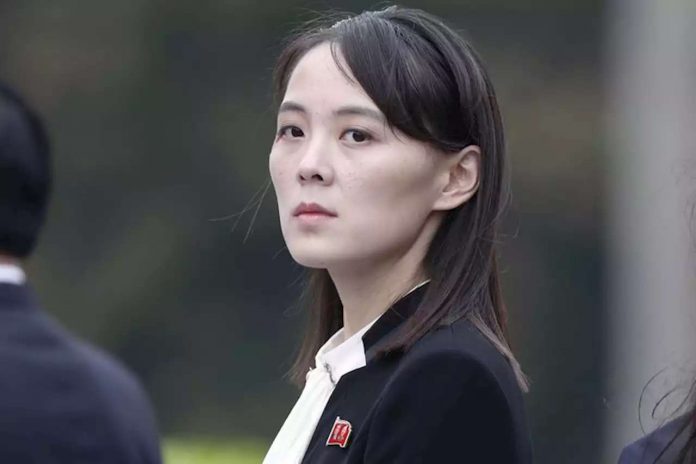 Even the smallest concessions are off the table now.

Kim Yo-jong, sister of North Korean leader Kim Jong-un, in Hanoi, Vietnam, on March 2, 2019.
Jorge Silva/Getty Images
statement last week
by the sister of North Korean leader Kim Jong-un indicates that no more arms talks will be held anytime soon and even that the deal Kim offered at last year’s summit with President Donald Trump in Hanoi, Vietnam—to shut down one nuclear reactor in exchange for the lifting of all U.S. sanctions since 2016—is now off the table.
Kim Yo-jong, first vice director of the Workers’ Party of Korea’s Central Committee and a woman of steadily growing power who has spoken on her older brother’s behalf several times in recent months, said on Friday that another summit with Trump would be “unpractical” and “not serve us at all.”
At least one
wire story
about her statement, released by the Korean Central News Agency, reported that she suggested such a meeting might still happen, but this isn’t quite the case. Rather, she said that a summit—or even the continuation of talks between midlevel diplomats—would happen only if the U.S. made “major changes” in its “attitude” and ended its “hostile policy” toward North Korea.
To North Korea, as its diplomats have long made clear, ending America’s “hostile policy” would mean withdrawing all U.S. troops and nuclear-capable forces—in other words, pretty much all air and naval forces—from northeast Asia, including South Korea and Japan. (Some have interpreted the phrase to include almost all U.S. nuclear weapons, even the missiles and bombers based in the United States, since they have the range to hit North Korea.

In short, the condition is a nonstarter, and North Koreans are invoking it as a way to provoke cleavages between Washington and its allies in the region.
The Dear Sister—as she is sometimes called—said that even if Trump suddenly embraced the deal that he rejected in Hanoi, it would be too late. Her brother has “completely ruled out” the idea of trading disarmament for sanctions relief, she said, adding, “We are fully capable of living under any sanctions.” She repeated this point a few times. “I have to point out clearly,” she stated toward the end of her remarks, that “when we refer to [the need for] major changes” from the United States, “it does not mean the lifting of sanctions.” It means the end of “hostile policies.”
It is unclear why this change is coming now. At the time of the Hanoi summit, which took place in February 2019, North Korea’s economy was in abysmal shape, and it hasn’t improved since. As Daniel Sneider pointed out in
Tokyo Business Today
, its economy has probably faltered further, since the border with China—North Korea’s No. 1 trading partner—has been closed to avoid the spread of COVID-19.
The Kims may be overplaying their hand, believing that Trump is desperate to take a deal—any deal—in order to tout himself as a peacemaker on the eve of the coming presidential elections. On July 9, the day before Kim’s statement, Secretary of State

How To Maintain Your Mental Health While Working From Home

Why You Should Grill Your Summer Cocktails