Home Woman Here’s why we need to keep statues and reminders of the past... 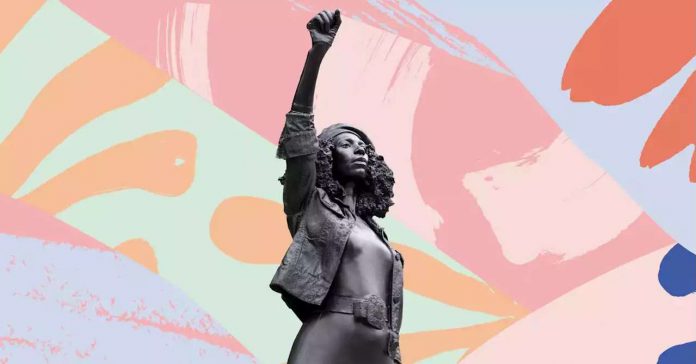 A statue of Black Lives Matter protester Jen Reid secretly replaced the torn down one of Edward Colston in Bristol.

Now do you believe me that racism DID play a part in Meghan leaving the UK?
Ateh Jewel
04 Jun 2020
Ateh Jewel
The imposing figure of Colston was ripped down and thrown symbolically into the Bristol Harbour. Colston became a favoured son of Bristol due to his vast wealth built from his human trafficking, as he held the monopoly on the English trade in African slaves. On his death in 1721, he bequeathed his wealth to many Bristol charities and institutions meaning his legacy would live on in the city. According to figures reported in the Guardian, Colston was responsible for the theft of 84,000 Africans, in his role as deputy governor of the ironically named Royal Africa Company. Under his watch, 19,000 innocent men, women and children died in the “middle passage”, while being transported in ships bound for their enslavement. Many perished due to violence, disease and the nightmarish conditions. These stolen people were forced to live in their own vomit, fear and faeces. The bodies of the deceased captured Africans, would be thrown into the sea, discarded as rubbish and waste. As a result, images of Colston being thrown into the harbour are particularly poignant.
Home secretary Priti Patel has said the toppling of the Edward Colston statue was the result of “mob rule” and “utterly disgraceful”. In my opinion, Patel’s statement is the disgrace. You may be surprised to hear that I agree with Patel, but not for the reasons you think. I think the statues of these men should stay up because we need to remember with clarity their role in British history. We need to
they represented, alongside a tribute and memorial to the 300 years and countless generations of their victims.
Read next
We just got an update on when the Friends reunion will start filming and it’s so soon
Jennifer Aniston
We just got an update on when the Friends reunion will start filming and it’s so soon
Hurry up!
09 Jul 2020
This story is deeply personal to me. I was a student at Bristol University in 1997. I was the only black student selected out of 200 students across the country to be chosen to study History at this Russell Group university.

Advertisement
Feminism
‘Your hair looks like pubes’: The microaggressions that have shaped my life as a black woman
Selah Brown
04 Jun 2020
Selah Brown
I grew up in central London, went to a private girl’s school in Knightsbridge and my father was a diplomat with the UN. However, when I arrived in Bristol at 19 to start my university career, I had £30 in my pocket and no idea how I was going to manage. I have a toxic and dysfunctional relationship with my father, who used money to punish and control. Penniless, I worked four jobs at the same time to pay my rent, buy books and eat beans on toast. I couldn’t afford a laptop like all my peers and was forced to walk 45 minutes each way to a deserted basement computer lab. I would start my coursework at midnight and work through the night as I had to work during the day. Each night I had to brace myself and make the decision to risk the chance of being mugged or
raped
, as I couldn’t afford a taxi home. The decision was clear, walk alone at 2am across the notorious Bristol Downs or don’t do my essays and fail. Failure was not an option. One night I was approached by a mugger, ironically at a cashpoint. I was withdrawing my last £5 to get a taxi home, as I felt I had pushed my luck. I charmed and bluffed my way out of what could have been a fatal situation.
Every term, I went to the school welfare counsellor to beg and plead my case for some financial assistance. I was exhausted and couldn’t make ends meet. I was begrudgingly given some money and made to feel ashamed, grateful and humbled for the University’s benevolence towards me. I was made to feel like a black Oliver Twist.
I’ve been a beauty editor for nearly 20 years and these are the most diverse foundation ranges I’ve found
Foundation
I’ve been a beauty editor for nearly 20 years and these are the most diverse foundation ranges I’ve found
Ateh Jewel

Sources Say Max Ehrich Is ‘Lying’ as He Doubles Down on...