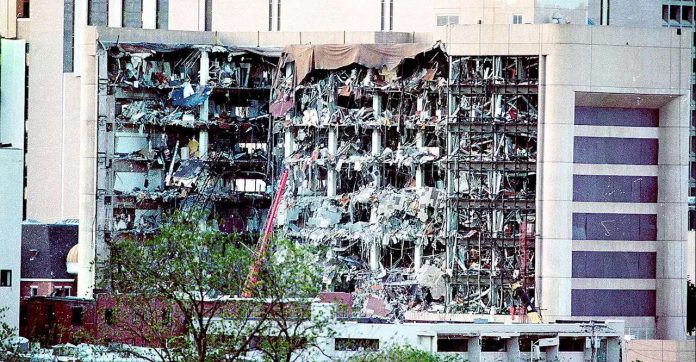 You’ll get the latest updates on this topic in your browser notifications.
A
downloadable app
— usually available only at the site, but now accessible for free worldwide to counter restrictions on public gathering during the COVID-19 epidemic — offers a virtual walking tour and moment-by-moment guide to the events of April 19, 1995. The answer to understanding how to prevent, and recover, from such an event, says Watkins, “lies in the power of community and the importance of every person in it.”
Of the 21 children enrolled at America’s Kids Daycare inside the building that morning, only six survived.
Brought together by PEOPLE
, five of them met again in 2015 at the site, now transformed with a reflective pool and chairs that commemorate each life lost. Some bear only superficial scars. Others still deal with the impacts of traumatic injury.
Ages 1 to 5 at the time, they were too young to have firsthand memories. “I read the newspaper articles my parents had saved and looked up information online to fill in the gaps,” Christopher Nguyen told PEOPLE five years ago. His awareness grew after he asked to visit the site and museum. He mourns the tragedy, but it makes him appreciate that he’s alive.
“Subconsciously I know that the connection to everyone on the grounds is of a melancholy nature,” he said. “I make small but significant choices every day to not waste the gift of life.”
Timothy McVeigh was executed in 2001 for the antigovernment attack; accomplice Terry Nichols is serving multiple life sentences.
Here are the stories the survivors and their families shared in 2015 with PEOPLE:
Christopher Nguyen, now 30; age then, 5 years
At first, when Christopher asked about the bald scar on the back of his head, his parents
told him it occurred in a fall
. But as he learned the truth of his injury, he also came to understand what he’d been feeling.
“As a child I could only describe my emotions as far as ‘feeling bad,’ whereas I can now readily restate it as survivor’s guilt,” he said. “Yet through the darkness I found a silver lining. Although my outlook is still periodically pessimistic, I find myself to be cautiously positive. I see and believe the best in people.”
Image zoom
Aftermath of the 1995 bombing of the Alfred P. Murrah Federal Building in Oklahoma City
“Each year on the anniversary I get a reminder of how lucky I am to be alive. Nineteen children did not survive that day. I have no right to be apathetic, coarse and ungrateful.”
He added: “I’m very appreciative that I’m alive and that my parents can see me grow. The other people, they won’t ever get that chance.”
P.J. Allen, now 26; age then, 20 months
Nothing about P.J.’s broad-shouldered appearance hints at the blows his body took in the blast. His right lung collapsed. Second- and third-degree burns covered half his body. His left arm was broken in three places. Pieces of cinder block were embedded in the back of his head. After years of surgeries, P.J., finally had his breathing tube removed when he was 11. “It was almost like I was being set free,” he said.
RELATED:
Still Living with Limits, Survivor ‘Thankful Every Day’
“I realize how blessed I was to make it, how thankful I am to God,” he said. “I’m really thankful for every day. The bombing affected us all, and we can’t forget that. To push it out of my head would be disrespectful to those that weren’t lucky enough to have their family member come out.”
His unintended celebrity included meeting President Bill Clinton and a hospital hug with Sarah Ferguson, the Duchess of York, that launched a years-long friendship.

Still, “I’d trade all my experiences to make that tragedy never happen, to just go back in time to make sure no one was hurt.”
Nekia McCloud, now 29; age then, 4 years
Nekia enjoys independence few expected when a traumatic brain injury from the blast left her in a coma for a month. “I guess at that time, I was thinking she was going to be okay, she could relearn everything, because she was so young,” said her mom, Lavern. “It was hard, but you pulled through it.”
RELATED:
‘One of God’s Angels That He Kept Here’
Quiet and sweet, Nekia is “at the level of a 6- or 7-year-old,” her mom said. But Nekia’s ambitions aim higher. In 2015 she was riding public transit to work five days a week at a center for young people with disabilities, liked to bowl, shop and visit the library, and knew how to cook her favorite meal of tacos.
“She wants a boyfriend,” said her mom then. “I’m hoping one day she will find a nice guy that maybe has some certain challenges like her. She says she wants to get married too. I’m hoping she’ll have that day.”
Image zoom
The Oklahoma City National Memorial & Museum
Joe Webber, now 26; age then, 20 months
The bombing broke his jaw and left arm, but for a long time the imprint on Joe went no deeper than the slight scar above his left eye and another that curves across his cheek. Then, on a random practice run as a high school hurdler, the magnitude of what he’d endured suddenly took hold. Stopped on the track, he realized “that I was in a tragic event so terrible that it’s amazing that I escaped alive,” he said. “I am so lucky to be here and even thinking about this.”
RELATED:
Bombing Survivor Still Coming to Terms With It
“For someone who doesn’t remember anything, it’s just an incredible story that’s hard to believe, and so I just have to keep reminding myself that it’s true, and how significant it is in my life and other people’s lives,” he said. “The sense of purpose, the sense of awe that comes with this whole story, has just made me a more thoughtful, faithful and compassionate person.”
Brandon Denny, now 28; age then, 3 years
Rebecca Denny, now 27; age then, 2 years
For a while, Rebecca, who missed the rare survivor reunion in 2015 as she readied to graduate from Oklahoma State University, used the bombing as a yardstick to measure her life — and found herself failing.
“I am constantly bashing myself and telling myself that [the victims] would have done a better job if they were here,” she wrote in a 2011 high school graduation essay. “So many lives were taken away that day, innocent lives, the only way I have been able to cope with this is to take everything in my own life and hold on to it.”
RELATED:
Brother and Sister Survivors on Different Paths
One of those things is her brother Brandon, who was the most seriously injured child to survive the blast. He required four major brain surgeries, hampering movement on his right side and making it tough for him to get his words out. “Brandon spoke more until he was 3 than I’ve heard him speak in 20 years,” dad Jim told PEOPLE five years ago.
Still, Brandon’s easy good humor and determined attitude — an NBA and NASCAR fan, he then worked four days a week at a Goodwill distribution center — helped his sister heal too. “I was worried about the past getting in the way of my future,” she wrote in 2011. “Bad things will happen, and I have learned to accept that, but if bad things didn’t happen to us, if we didn’t have those moments of weakness, we wouldn’t be able to enjoy the good nearly as much.”
Advertisement

Make sure to avoid these commo