Home Woman The Tiger King and I Almost Offers a Corrective to the Hit... 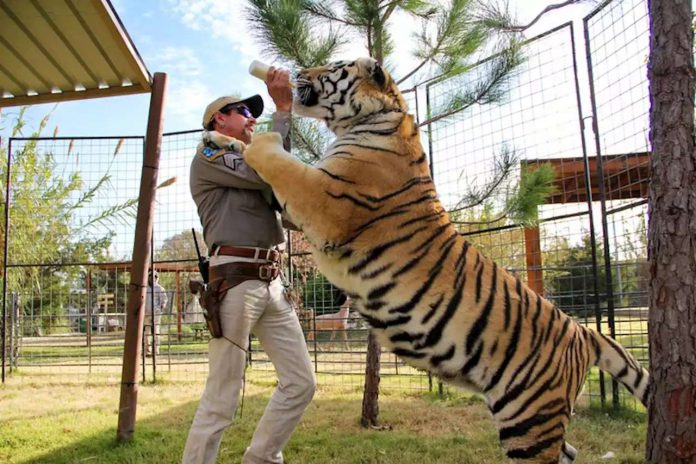 Netflix’s new special tosses its audience some juicy scraps, but it’s there to whet appetites, not spoil them.

Instead of the traditional aftershow featuring all of the participants reunited in an ersatz living room,
The Tiger King and I
, the oversold “eighth episode” of Netflix’s runaway hit show, filmed its conversations COVID-19-style, with host Joel McHale conducting half a dozen interviews from the safety of his own home. But the 40-minute special owes its existence, as McHale quipped at the outset, to a different pandemic: “
Tiger King
fever.”
While there’s no way to evaluate McHale’s repeated claim that it’s “the most popular documentary of all time,”
Tiger King
has become an inescapable phenomenon over the past three weeks, an engrossing train wreck whose lurid appeal was supercharged by the paucity of available alternatives. At a moment when the public square is all but deserted, losing ourselves in the story of an openly gay polygamist redneck with a thing for exotic animals felt like the closest thing to a collective experience—or, at least, a collective experience not rooted in fear and uncertainty. Tracking down the story’s players in the present day has become a profitable sideline, and with the series remaining at or near the top of Netflix’s charts, they found a way to cut themselves in on the action and to do it with minimal new investment.
Although it’s listed as a new episode of the seven-part
Tiger King
,
… and I
is just a barely glorified postgame roundup, checking in with the series’s minor players while offering little in the way of fresh insights, to say nothing of the WTF moments that the series delivers on a regular basis. These omissions are bizarre considering how much juicy material the show left on the table, but even when McHale does touch on a subject the show omits, like the fact that Joe Exotic
didn’t even sing the country songs
that are presented as his, he glosses over it or uses it as fodder for a weak one-liner. The series leaves so many questions unanswered, but McHale seemingly didn’t bother to pursue any of them, or if he did, those parts got cut out in favor of repetitive icebreakers like “Who would you want to play you in the movie?”
Occasionally,
The Tiger King and I
touches on an interesting subject, like the fact that the series persistently misgenders Saff, the transgender man who lost his arm to a tiger bite. But he’s so phlegmatic about it—perhaps not surprisingly for someone who had his arm amputated and went back to work the same week—that it lets the filmmakers skate by without explanation.

tigers.
Given that the special at least gives us a few solid minutes with each of its participants, it does include a few small revelations, like that Erik Cowie, the head zookeeper who responds to McHale’s opening “Howya doing?” with “Just living clean and loving Jesus,” is a recovering alcoholic, or that Joshua Dial, the campaign manager who witnessed the death of Joe’s husband Travis, worked out of the same office staring at the bullet hole in the wall for another year and a half. (Not surprisingly, he is now raising money for psychological counseling and meds.) Jeff Lowe, the financier who took control of Joe’s zoo, still comes off as an unrepentant prick and, dropping hints about undisclosed dirt on other documentary subjects, seems to be the interviewee who’s most clearly angling for a reality series of his own. (I wish I could confidently say that a show about a wealthy Vegas sleazebag with an open marriage and a sexy nanny would be a dud, but the success of
Tiger King
If
The Tiger King and I
acts as any kind of corrective to the series, it’s by largely rejecting the framing of Joe Exotic as an eccentric animal lover who got carried away by fame. With few exceptions, the people McHale talks to are glad that Joe, whom they describe regularly executing animals with his handy revolver, is in prison, and a few express the hope that he’ll die there. McHale asks Kirkham to compare Joe to his old
Inside Edition
boss Bill O’Reilly, and Kirkham concludes that Joe is “more evil,” but O’Reilly is “more of just an asshole.” The obvious anger they still have toward him makes it even more clear how much
Tiger King
was seduced by its subject and how audiences have played along. The extent to which the show’s viewers were

How Do I Get My Parents to Work Out With Me?

Madewell Jeans Are On Sale for as Low as 75