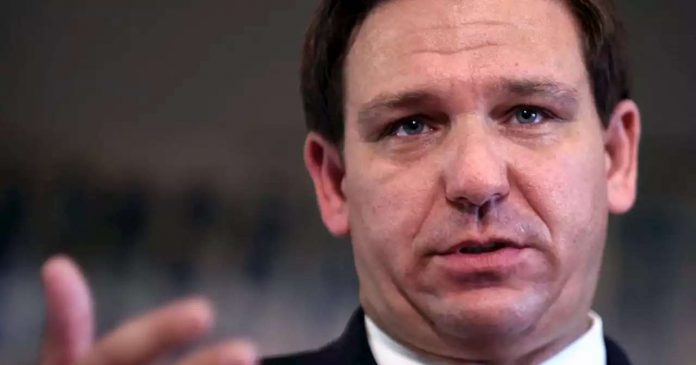 The governor’s reopening strategy puts them in life-threatening danger, they say.

Teachers hope Ron DeSantis learns his lesson. Finally. Photo: Paul Hennessy/SOPA Images/LightRocket via Getty Images Florida’s Republican governor wants to reopen public schools next month. But teachers and parents say it’s too soon, and a group has filed suit to try to force a delay. Filed by the Florida Education Association, individual teachers and local parents, the suit names Governor Ron DeSantis alongside the Florida Department of Education and Carlos Giménez, the mayor of Miami-Dade County. “Gov. DeSantis needs a reality check, and we are attempting to provide one,” FEA president Fedrick Ingram said in a press release. DeSantis “needs to accept the evolving science,” which shows that children can indeed spread coronavirus, Ingram added.
Over 360,000 Floridians have been confirmed positive for COVID-19, and 5,072 have died, the Miami Herald reported on Monday. Those figures make the state a leading epicenter for the virus. Meanwhile, DeSantis continues to shift the burden of prevention from the state to the public. He has refused to issue a mask mandate, and, thanks to an emergency order from the state education commissioner, school buildings are scheduled to reopen for five days a week next month. Local districts have the option to offer virtual instruction if they prefer.
Like many of their colleagues in Sunbelt and western hot spots, Florida teachers now weigh two options. They can go to work despite the dangers, or they can defy lawmakers and protest. As ABC Action News in Tampa Bay reported on July 14, some teachers have already staged a socially distanced rally in Pinellas County. They’re asking for school buildings to remain closed until local communities go two weeks without a positive case of COVID-19. An early reopening could be deadly — and not just for teachers, the FEA’s lawsuit notes. One plaintiff is the parent of a child who has “a chronic digestive disorder and has a compromised immune system,” according to the complaint.

Two others are parents of children with respiratory conditions. The complaint also references local news reports indicating that teachers have begun to prepare living wills.
By ignoring available scientific evidence and forging ahead with a reopening plan that adheres to President Trump’s tweeted wishes but not to the Centers for Disease Control’s actual reopening guidelines, the state violates its legal obligation to provide safe education, the complaint argues. The American Academy of Pediatricians had previously written to DeSantis urging him to put reopening on hold for now. A teacher and a parent have separately sued the Orange County, Florida, school district over its plans to reopen without proper safety measures in place.
Despite the gathering heat, DeSantis seems unlikely to concede without a fight. “There’s a lot of parents who’ve seen a regression in academics and have seen their kids miss some of the great things about being in school,” he said at a press conference earlier this month. “If [parents are] not comfortable with their kid going back to a school setting, they should have the right to make that choice.” DeSantis has also downplayed the possibility that children can transmit the virus to adults, though his position contradicts existing research. In July, a large study from South Korea concluded that children between the ages of ten and 19 spread the coronavirus at the same rate as adults and that while the risk of transmission is much lower among children under ten, it still exists.
“Everyone wants schools to reopen, but we don’t want to begin in-person teaching, face an explosion of cases and sickness, then be forced to return to distance learning,” Ingram, of FEA, added in his statement. “Florida’s Constitution demands that public schools be safe. Teachers and parents want our schools to meet that basic standard.”

A Black Lady Sketch Show’s Trailer Is a Nonstop Parade of...

French fancy Why Emily in Paris is the escape fantasy we...