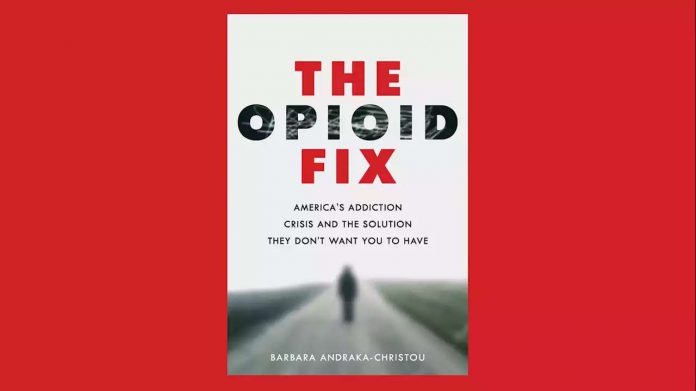 Early data suggest the pandemic may be driving up overdoses. Author Barbara Andraka-Christou says the solution to the addiction crisis is right before us: Improve access to life-saving medication.

Andraka-Christou has spent years studying those regulations, and in her new book she explains how they prevent patients with opioid use disorder from accessing effective, life-saving medications such as buprenorphine and methadone. NPR recently spoke with Andraka-Christou about her book,
The Opioid Fix: America’s Addiction Crisis and the Solution They Don’t Want You to Have.
This interview has been edited for clarity and length.
Many books about the opioid epidemic focus on the problem — the suffering patients, the ravaged communities — and discuss who is to blame. Your book, refreshingly, focuses tightly on treatment as a solution. Why did you decide to write a book about treatment?
I remember once giving a presentation in Indiana to a community organization about treatment, and someone got really upset at the end. She stood up and said that her son had died of an opioid overdose, and she was really upset that I wasn’t talking about
prevention
, that I was talking about
treatment
.
I realized that most of the public messaging I was hearing was about prevention, not treatment:”Let’s warn people that opioids are dangerous!” or the push to have lawmakers put limits on the prescribing of pain pills by physicians.
But we can’t just ignore those who have already developed an addiction, and just assume “Well,
they
are too far gone, so we need to start with the new, ‘innocent’ people and try to prevent them from actually developing this awful disorder.”
Why do you think it’s so much harder to talk about treatment, or for communities to come together to provide it?
It comes back to this moral perception that drug use is a choice. And certainly the first time, it often is. But to develop a disorder where you’re compulsively using something with horrible consequences? At a certain point, it’s no longer a choice. But given society’s limited resources, many don’t want to apply those resources to people who are just”making a bad decision.” You want to apply them towards the uninitiated, the ones who haven’t taken that first step of getting a pill prescription.
But it’s ironic, because on the treatment side, the tools are already there. We actually know what works. It’s really well established. On the prevention side, it’s a lot more tricky. Yes, we can prevent someone from taking that first opioid, to a certain extent, by not over-prescribing. But we know, for example, that adverse childhood experiences play a huge role in one’s likelihood of developing
any
substance use disorder. And how do you prevent that? That’s so incredibly complex. I couldn’t even begin to come up with a strategy to prevent that, whereas I can pretty quickly tell you what to do to treat someone with opioid use disorder.
You would recommend medication-assisted treatment (MAT) using methadone and buprenorphine (commonly marketed as Suboxone). How helpful are these medications? And why are there so many barriers to using them more widely?
There’s a lot of negativity that exists with respect to methadone and buprenorphine. Which is wildly problematic, when you think that another
article
just came out showing that buprenorphine and methadone are absolutely the best at preventing opioid overdose and opioid relapse as compared to a variety of other treatments, including naltrexone, including residential treatment, including outpatient treatment, including detox.
This book isn’t some shocking new innovation. I’m not saying ‘Wow, we just discovered that these medications are great!’ It’s the complete opposite. We’ve known for decades that these are the most effective treatments.
When I started looking at the laws surrounding Suboxone or buprenorphine, I was fascinated because they were so stringent.

At the time, they were more stringent in several respects than laws regulating pills like oxycodone or OxyContin. I thought that’s just ridiculous and hypocritical.
There are a ton of legal barriers, but then I started seeing other things like stigma against MAT in the recovery community itself, within 12-step groups, within residential centers (or”rehab” programs as they’re commonly called). Then I started seeing cost issues and health insurance barriers like prior authorizations.
The subtitle of your book is pretty direct:”The Solution They Don’t Want You to Have.” Who is”they”?
Who
doesn’t want people to use medication-assisted treatment?
‘They” refers to the recovery community, but also the criminal justice system. Those are the two main actors whom I’ve seen affirmatively saying”Don’t take these medications.” And by recovery community, I don’t just mean some 12-step groups. I also mean rehab centers that will actively tell people”By the way, when you leave, don’t take Suboxone” or”We won’t even let you into our center if you take Suboxone.”
The book goes deep inside the world of drug courts, which provide an alternative to prison. But your research found that many judges ignore the potential of MAT, and some even force people in recovery to stop taking medicine as a condition of staying out of jail, or to regain custody of their kids. What’s going on?
There is basic intellectual confusion over the fact that buprenorphine and methadone are opioids, although of a very different kind [than heroin and addictive opioid painkillers]. As one judge told me:”Why would we just give a whiskey bottle to an alcoholic?” But the focus shouldn’t be on the fact that buprenorphine is an opioid. The focus needs to be on the fact that someone taking it is able to function and they’re able to function better.
Back in 2013, there was a groundbreaking study published that showed that 50% of adult drug courts nationally
prohibited
buprenorphine, which is just mind blowing. Now, we haven’t had a study of that scale to date, so we don’t know how those numbers have changed. But I have done my own studies looking at smaller areas, and also statewide in Indiana and in Florida, and there’s still a lot of negativity in the court system towards methadone and buprenorphine, especially — not so much towards naltrexone, because it’s not an opioid.
You write that some of the stigma against MAT is easing, and in the book you acknowledge some of the clinicians and treatment centers that
do
understand how effective MAT can be, and encourage it and prescribe it. But what other changes could help?
The people who run drug courts, who make decisions about practices and policies in that court, they’re not composed of medical professionals. You have a judge, the prosecutor, a program administrator, and a counselor who is typically from a community agency, which is often — statistically, it’s 65% of the time — abstinence-only. So there’s little information sharing within that environment about the medications.
They’re very autonomous, these courts. Oftentimes there’s no real oversight over them. Now, Florida, interestingly, in about a year or so, is going to be requiring courts, at least the adult drug courts, to get certified in order to get funding. And part of the certification requirements will include adhering to best practices with respect to MAT. And that’s really exciting.
That’s something I actually argued for, in one of the first articles I wrote. Why aren’t more states doing this? Greater oversight is so important when there are decision makers who don’t have a medical background, making decisions that impact people’s health care.

A Wedding Dress Party Is The Very Best Kind of Party