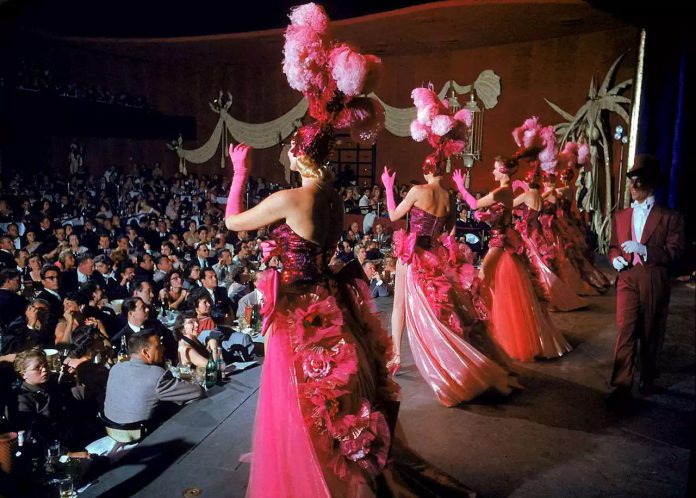 Photos of Vegas in the mid-1950s — when the high-stakes mecca was in the midst of a building boom that would redefine it forever.

Vintage Vegas: Scenes From a Desert Boomtown
View Gallery
Loomis Dean/Life Pictures/Getty Images
Written By: Ben Cosgrove
Of all the major destination towns in the U.S., Las Vegas might be the most perfectly, unashamedly transparent. No other city in North America, after all has for so long been so identified with one pursuit: namely, the heart-pounding, more-often-than-not-futile hunt for the improbable, near-mythic Big Score.
And the fact that Las Vegas resembles a gaudy neon mirage in the desert? Well, surely no more apt an image could apply to a place where dreams of riches, and occasionally of romance go to die.
But Las Vegas is also a place where dreams, large and small, are just as frequently born. Hotel and casino owners dream of founding (or furthering) their financial empires. Singers, dancers, comedians and magicians dream of performing night after night before rapt crowds. The unemployed from all over the U.S. dream of finding work.
In 1955, 50 years after Las Vegas was founded, LIFE magazine took a rather skeptical look at the boomtown and its prospects for growth in a cover story titled “Gambling Town Pushes Its Luck.” The Loomis Dean pictures in this gallery, meanwhile (many of which were never published) provide some wonderful visual reminders of how raw a place Las Vegas was in the mid-’50s, before the Rat Pack made the city its home away from home and decades before it would begin to reinvent itself as a family-friendly mecca.
Some of the pictures appeared in the June 20, 1955, issue of LIFE, in an article that described the city as “set for its biggest boom,” with some caveats:
In Las Vegas last week the temperature was up to a torrid 110 degrees and the townsfolk who operate the only large gambling center in the country welcomed the seasonable weather.

With it they expected the usual bountiful summer crop of tourists trying out their luck and leaving their money behind. The sign of good times seemed everywhere. . . . But with all this a shadow of doubt fell across Las Vegas, a worry that the bloom it was set for has started to wilt.
In the past month, two new top-notch hotels opened. One was the $5 million Dunes, which lugged 120 slot machines in anticipation of the rush. The other was the Moulin Rouge, the first interracial hotel in Las Vegas, which welcomed whites and Negroes to its accommodations and gambling tables. It had Joe Louis as part-owner and host, and a lively, lovely chorus in its floor show.
Like a gambler on a prolonged winning streak, Las Vegas had the feeling its run of luck couldn’t end. For more than a decade, it had parlayed one prosperous year into a more prosperous next year and went into the expansion more in the spirit of hunch than of calculated economics. The opening of the new hotels and of what Las Vegas hoped would be a new era of money-making was opulent and promising. . . . But when the excitement of the opening died down, the town looked at its new places—where customers were scarce and the betting was light—and wondered: Has Vegas pushed its luck too far?
That question, of course, has come up repeatedly over the years, as the desert city has steadily grown from a 100-acre (40 hectare) railroad town in 1905 to a sprawling metropolis today. But no matter the odds, Las Vegas has thus far always seemed to have one more ace in the hole, one more trick up its sleeve to keep the lights on, the casino floors humming and the dreamers, the players and the suckers coming back over and over again.
Liz Ronk edited this gallery for LIFE.com. Follow her on Twitter

These Platters Will Make Serving Dinner At Home So Much Easier

BMG Acquires Catalog of Cheyenne Records Including Songs by Germany’s No...

How Covid has made millennials turn away from careless spending and...