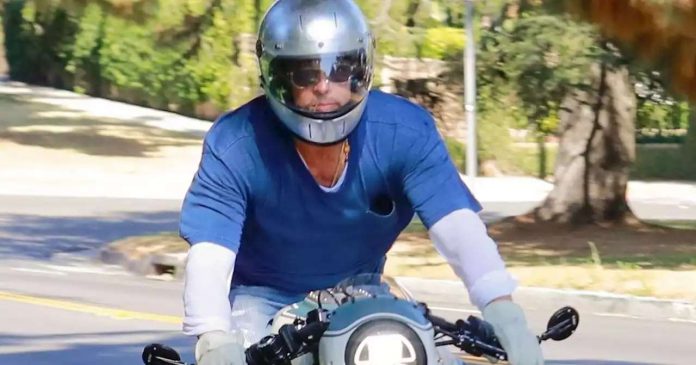 Brad Pitt and Angelina Jolie have seemingly entered a new phase of their relationship as the bitterness of their 2016 split is put behind them.
The 56-year-old Hollywood actor was pictured arriving at Angelina’s home in Los Angeles, letting himself in through the gates with a quick input of numbers on the security code pad.
It is not the first time recently that Brad has got to spend time with Ange and their children as the ice that had frozen their relationship seems to have finally thawed.
Los Angeles County have eased restrictions on seeing people face-to-face and Brad has taken this opportunity to head to Angelina’s $25 million mansion, with it reportedly not being the first time in the past few weeks that he has headed over.
Three months of lockdown seems to have been enough for the couple to put some of their recent past behind them and Brad is now having more regular contact with his children.
Brad was coolness personified as he arrived at the house in the Los Feliz area of Los Angeles, not far from where he lives himself.
No protective leathers for the Oscar winning actor as he wore a white sweatshirt under a blue t-shirt to accompany his white biking gloves and silver helmet with sunglasses on underneath.

The visit comes just a couple weeks after he was last seen heading into Angelina’s compound, ahead of their twins Knox and Vivienne turning 12.
This was on July 9 and Brad was back for some more family bonding on Tuesday.
While Angelina has been seen with Vivienne on shopping trips and taking dinner with 16-year-old Pax, since the quarantine rules were lifted, Brad is yet to be photographed with the kids himself.
In fact, he hasn’t been snapped spending time with the children since he split from Angelina four years ago.
During that time, the child custody battle between Brad and Ange got quite acrimonious but a temporary custody agreement that was drafted in November 2018 has seemingly paved the way to the pair becoming more comfortable in each other’s company again.
A source told Hollywood Life in October 2019: “They have a complicated arrangement at present, but she has primary custody with Brad getting tons of visitation as instructed by a judge the last time they went to court.”
Do you have a story to sell? Get in touch with us at webcelebs@trinitymirror.com or call us direct 0207 29 33033.

Chanel’s make up artist on tricks for natural beauty