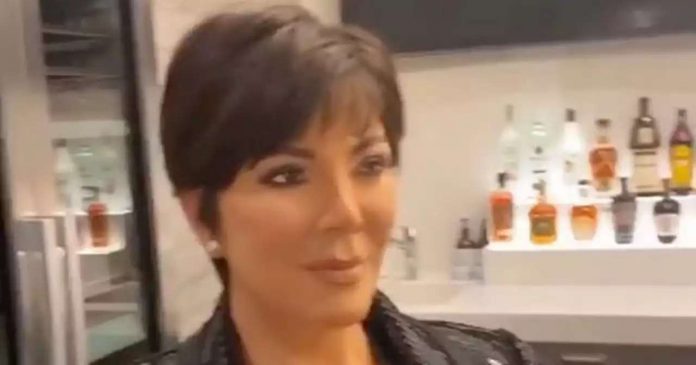 Kylie Jenner has unveiled the finishing touch to her games room in her new mansion – a full size waxwork model of her mum, Kris Jenner.
The Keeping Up With The Kardashians momager may have had a mini crisis to help solve in the family as son-in-law Kanye West took to Twitter to berate her before demanding a divorce from wife Kim Kardashian.
This hasn’t stopped Kyle from acquiring a version of her mother for herself, warning her sisters to keep their hands off in the process.
In a video that the 22-year-old beauty mogul shared on her Instagram story, Kylie films herself entering her games room, with a black-clothed pool table in pride of place in the middle of the room.
Sat in the bar area is Kris Jenner but while it looks completely life like, it is actually an impressive wax model of her, dressed in a black number.
Kylie was obviously pleased with her acquirement as she told her fans: “Guess who has come to live with me now?
“Kris Jenner’s wax figure. She’s mine now and I don’t want to get any texts or phone calls from any of my sisters after this.”
With the camera panning ever closer to the model of Kris, Kylie reiterates: “She’s mine.

The camera then zooms in on Kris’ face before stopping with a close up of the lips, at which point Kylie finishes with: “Thanks mum.”
It is not the first significant addition to Kylie’s household in recent days as at the weekend it was reported that she treated her two-year-old daughter Stormi to a $200,000 pony named Frozen that she flew from its home in the Netherlands to her home in Los Angeles.
Breeder Stal Wiltern confirmed Kylie has taken the animal off his hands when he wrote on Instagram : “We got news he has landed in L.A. and living the life with a sweet little girl named Stormi. Her parents, in true fashion, made sure their daughter had the most precious pony out there.”
Kylie also shared pictures of her very lucky daughter toddling round with a $1,180 Louis Vuitton handbag.
Now she will have Kris watching her every move as well from the corner of her bar.
Do you have a story to sell? Get in touch with us at webcelebs@trinitymirror.com or call us direct 0207 29 33033.

Kylie Jenner and Travis Scott Kissed and Were All Over Each...