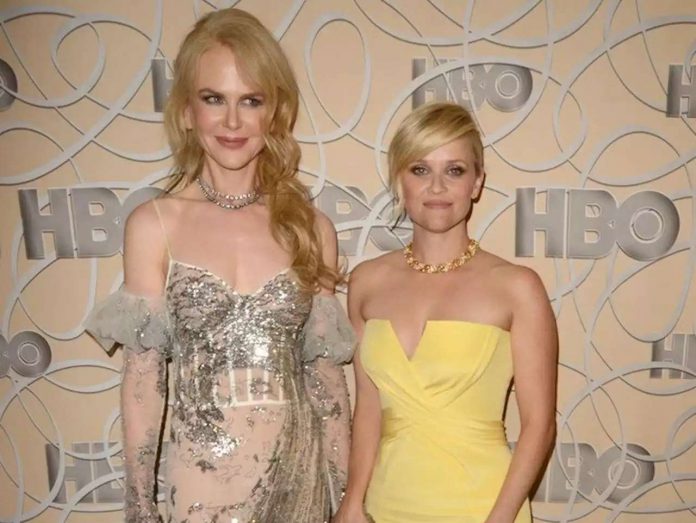 Is Reese Witherspoon and Nicole Kidman’s friendship over after Kidman didn’t involve her Big Little Lies co-star in her latest project? Gossip Cop has looked into the rumor and found several red flags.

friendship over after Kidman didn’t involve her
Big Little Lies
co-star in her latest project? A report from one tabloid this week claims this is the case.
Gossip Cop
has looked into the rumor and found several red flags.
Woman’s Day
is predicting that the friendship between Reese Witherspoon and Nicole Kidman is all but over this week. Kidman’s latest project,
9 Perfect Strangers,
which the Australian actress is starring in and producing, is apparently the catalyst tearing these famous friends apart. Witherspoon is allegedly upset with her
Big Little Lies
co-star for not only taking on the project but for moving the production to Australia.
Sources tell the outlet Kidman “must have known there was no way Reese would be able to join her,” adding that Witherspoon has three kids. The source goes on to claim that Witherspoon has also been “struggling a little bit”
in her marriage to husband Jim Toth
, which is supposedly another reason why participating in the New South Wales production would be impossible for her.

“I certainly wouldn’t blame Reese if she thought she was being deliberately cut out, and that is definitely the gossip among Hollywood circles,” the source continues.
Adding to Witherspoon’s supposed displeasure is the fact that she was the one to introduce Kidman and Australian author Liane Moriarty, who wrote the two novels
Big Little Lies
and
9 Perfect Strangers
are based on. “Reese was the one who cultivated a creative relationship with Liane initially. It was something she was very proud of,” the source reveals, adding, “to have Nic and Liane not only go it alone but also take production a world away from her in Australia where she has no hope of being involved, must hurt.” What really hurts is this overly dramatic and overly speculative reporting.
It comes as no surprise to us here at
Gossip Cop
that
Woman’s Day
would report utter nonsense about both Witherspoon and Kidman, since that’s exactly what it’s been doing for years. This is the same outlet, after all, that reported that

My House Doesn’t Truly Feel Clean Until I Do This