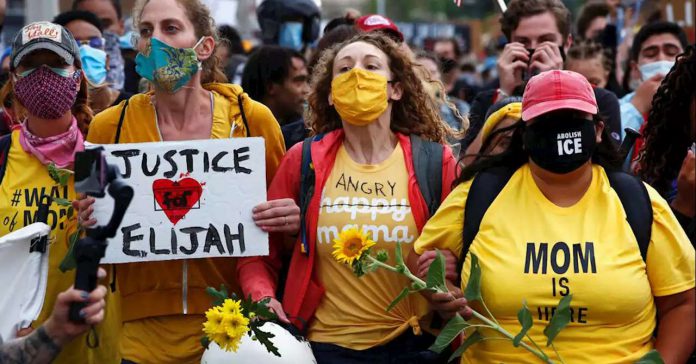 The movement that started with a few dozen moms in Portland now has offshoots in cities across the country.

wounded after a car drove through the crowd
.
Wall of Moms groups in Missouri, North Carolina, Alabama, Texas, Chicago and Maryland are reaching out to local activists and plotting their next steps, organizers from each group said in interviews.
Gia Gilk, 45, a mother in Albuquerque, N.M., started a Facebook group to organize a local Wall of Moms chapter last week, thinking she would attract 30 or 40 members. Within 24 hours, she said, almost 3,000 moms had signed up. “I’ve never done anything like this before,” said Gilk, about coordinating the group. “I just think it’s time for us to finally stand up.”
The Wall of Moms exists to protect and amplify protesters, organizers say. An official online
“tool kit”
(designed by the group in Portland) for starting a Wall of Moms chapter, stresses that groups should reach out to local Black Lives Matter and racial justice organizations. Wall of Moms members are directed to take cues from local activists: to not speak at protests unless they’re asked, and to donate any funds raised to Black-led organizations.
Wall of Moms marchers are mostly white, and many are first-time protesters.
The Wall of Moms groups consist of predominantly white women who have garnered a swell of attention that Black mothers protesting in Portland for months did not receive, participants and organizers said in interviews. That attention is not lost on the participants nor the organizations they partner with, some said. “Black moms are leading this,” said Jennifer Kristiansen, 37, a lawyer and Wall of Moms member who was arrested during a Portland demonstration. “Moms didn’t just show up a couple nights ago. Black moms have always been there.

Image
Norma Lewis holds a flower while forming a “wall of moms” during a Black Lives Matter protest in Portland, Ore.
Credit…
Noah Berger/Associated Press
For some longtime activists, the Wall of Moms’ momentum demonstrates how widespread the movement against racism and police brutality has become. “These moms are realizing people need protection,” said Nicole Roussell, 32, who helped organize a protest in Washington, D.C., on Saturday where Wall of Moms members showed up. “They’re spontaneously popping up all around the country, days before the protest, and then coming out — it just really shows the current movement is getting broader and wider and deeper.”
In Portland, Wall of Moms has partnered with
Don’t Shoot Portland
, a police accountability organization. “Most of them have never protested before. They felt called,” said Tai Carpenter, 29, the president of Don’t Shoot Portland. “A lot of us have been on the front lines for a long time organizing. To come in at a moment like this, it’s crazy. These moms are seeing it head-on — it’s a different perspective.”
Julianne Jackson, 35, a longtime activist and Portland mother who helped lead Wall of Moms at a march last week, said the group provides a powerful symbol. “When you see a mom get tear-gassed, and they’re very clearly labeled a mom, they’re not starting trouble, they’re wearing high-waisted pants and trying to live their life — when you see that, it’s an incredible sight,” Jackson said.
Mothers have a legacy role in protest movements.
Mothers have long played a critical role in activism in the U.S., but particularly of late. In 2015 in Chicago, Black mothers founded

You won’t believe what Harley from Love Island 2017 looks like...