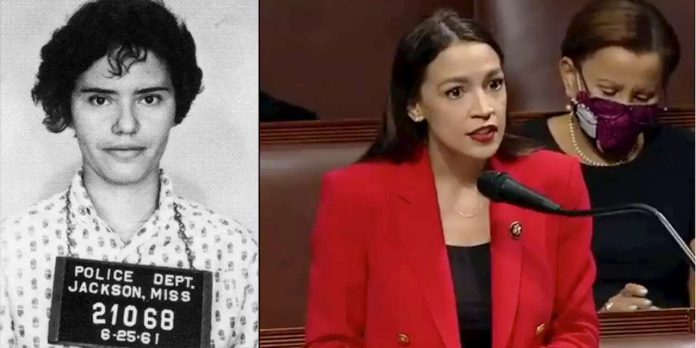 The special venom and bigotry behind such slurs lobbed at women of color are unmistakable as history teaches us. For me, that’s why Ms. Mary Hamilton’s story comes to mind.

, of fire hoses and dogs on children, women and men.  Children as young as seven and eight hauled off in patrol wagons for peaceful demonstrations pleading equality in schooling.
Civil Rights Museum in Birmingham, Ala. (
Michael Delli Carpini
/ Flickr)
As a Freedom Rider, Mary Hamilton was arrested, jailed with men, subjected to nonconsensual vaginal exams, beaten and verbally abused—yet she continued her work across Tennessee, Mississippi and Alabama, registering Black people to vote.
In court, when prosecutors and a judge refused to properly address her, she answered ,”I won’t respond until you call me
Miss
Hamilton.”  She was held in contempt of court and sent back to jail.
As one
reporter
noted, this was not “just about an honorific.”  Rather, “it was about respect and racial equality” in a country that honored Confederate traitors more than it embraced Black citizens.
The NAACP Legal Defense and Education Fund, which took on the litigation, argued the long history of demeaning Black women by refusing to acknowledge their full names and accord them the formal honorifics used with white women in court, was a form of racial discrimination, reflecting a longstanding racial caste system, and as such violated Ms. Hamilton’s constitutional rights. They won.
That was 1964, but clearly this fight for respect within our legal institutions and workplaces is not over for women generally, and particularly for women of color.
This week, in a rambling response, Rep. Yoho offered a meandering speech about his passions, his wife, his daughters and the pain of growing up poor.  As he explained to the public “I cannot apologize for my passion.”
Never did he acknowledge Rep. Ocasio-Cortez by name or apologize.  Never was she accorded the appropriate respect deserved of a colleague and fellow lawmaker.  Never did he take responsibility for his actions.

Simply put, Rep. Ocasio-Cortez remained invisible.
She deserved better. Honestly, the girls and women of our nation deserve better. We all deserve better—because such misogyny harms men and boys too, creating bullies in them who lack the capacity to be introspective and the courage to be accountable.
But sadly, this type of abusive, misogynistic behavior is not new, as Rep. Ocasio-Cortez explained to colleagues in a House floor speech.  And, this is the problem.  As she
pointed out
:
Mr. Yoho was not alone. He was walking shoulder to shoulder with Representative Roger Williams, and that’s when we start to see that this issue is not about one incident. It is cultural. It is a culture of lack of impunity, of accepting of violence and violent language against women, and an entire structure of power that supports that.
She’s right.  One recent
study
revealed that nearly 75 percent of workplace bullies are men, and most of their behavior targets women.  Not surprisingly, often its female victims who either leave such toxic jobs, disrupting their lives, or because of economic hardships suffer through office abuse, which is compounded by the silence of their colleagues and bosses. This becomes a different type of economic violence.
But the silver lining here, as in the case of Ms. Mary Hamilton, both women spoke out, naming and confronting abuse and misogyny within our legal institutions.  And, by shining a light on this, they inspire other women and girls to reject male misuse and abuse of power.  For that we can all be grateful.
The coronavirus pandemic and the response by federal, state and local authorities is fast-moving
.
During this time,
Ms
. is keeping a focus on aspects of the crisis—especially as it impacts women and their families—often not reported by mainstream media.

CupcakKe Responds to Criticism of Her Diss Track About Lizzo Megan...