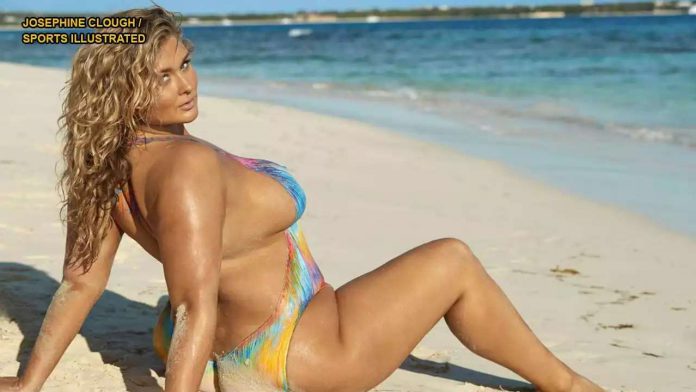 Hunter McGrady is back.

SI SWIMSUIT MODEL HUNTER MCGRADY SAYS SHE WAS ONCE CALLED TOO ‘BIG’ FOR THE INDUSTRY AT 114 POUNDS
“One of my favorite shots from this shoot,” McGrady captioned one photo where she’s posing in a black two-piece. “Magical place, magical team, magical time.”
In another photo, where McGrady is wearing a striped suit while on the crystal-hued waters, the model admitted she’s still stunned to be recognized as an SI Swimsuit pinup.
“Sports Illustrated has given me so much and created so many incredible opportunities for me and I will forever be grateful,” she explained. “Every time the magazine comes out it is a ‘pinch me’ moment.”
“When I look back on this shot from my @si_swimsuit shoot I remember being so in the moment and feeling so strong, and so confident more-so than ever before!” McGrady captioned another snap. “I took the months, and weeks, and days, and even hours leading up to this shoot to really hone in my ‘why’ and really setting my intention for this shoot.”
SPORTS ILLUSTRATED SWIMSUIT’S ‘CURVIEST MODEL EVER’ HUNTER MCGRADY RETURNS FOR 2020 ISSUE
“Of course I always know I’m going to get killer, beautiful shots with SI but most importantly I know that the woman who for so long hasn’t seen her body represented will hopefully feel seen, heard, and understood,” she added.
According to the outlet, McGrady made her debut at SI during the brand’s 2017 model search. She was brought back to become a rookie in 2018 as part of the special project “In Her Own Words.

Back in May, McGrady told
Fox News
she felt at her most confident posing for the 2020 issue.
“For some reason this year, I really went in feeling my absolute best,” she said at the time. “Any kind of insecurity I had just went out the door… Every year I shed a little bit of that insecurity because let’s face it, we’re all human. I love myself, but that doesn’t mean I don’t have any insecurities. But this year I feel like I really let that out the door and went in feeling with this feeling of just being the best that I can be. And I just had fun with it. I’ve already seen some of the photos and they’re amazing. I just feel really, really great about this issue.”
SPORTS ILLUSTRATED SWIMSUIT MODEL HUNTER MCGRADY PRAYS FOR HATERS ON INSTAGRAM: ‘CAN’T FIGHT FIRE WITH FIRE’
McGrady said she hopes to shed light on the misconceptions that she feels people still have about her career.
“I think a lot of people think that [plus-sized models] are able to eat whatever they want,” McGrady explained. “They don’t work out. They just sit at home and lounge around. That is absolutely not the case. I work out with my trainer and I train daily. People for so long have equated a larger size to be unhealthy. The truth of the matter is that I’m more healthy now than I’ve ever been in my life. It’s a stigma that needs to change.”
On Our Radar

What’s the Next Status Hand Wash That Isn’t Aesop ?

Eiza Gonz lez apologizes for past use of blackface in telenovela...