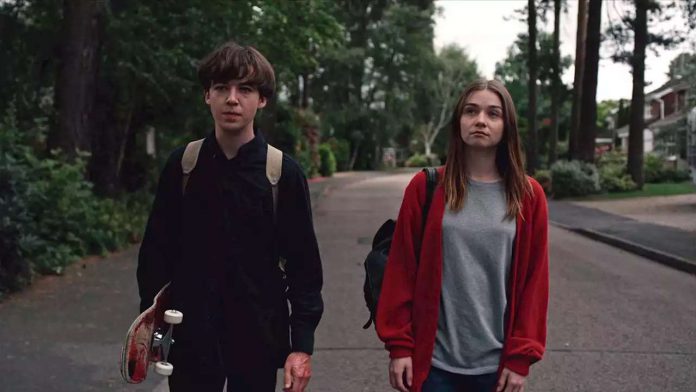 ‘I write this as a winner, who has been made to feel like a loser,’ says Dominic Buchanan in an open letter.

Courtesy of Netflix
‘The End of the F***ing World’
“I write this as a winner, who has been made to feel like a loser,” says Dominic Buchanan in an open letter.
Dominic Buchanan, the British producer of Netflix hit series
The End of the F***ing World
, has penned an open letter in which he calls out the British Academy for rules that, despite his show recently winning the BAFTA TV Award for best drama, prevent him from receiving a physical award, while also addressing efforts to improve inclusivity.
In a lengthy letter entitled
” Buchanan describes the bumpy eight-year journey that the project took from taking
The End of the F***ing World
from comic book to screen, how it initially envisaged as a film with Film4, before going into turnaround and later transforming into a TV show with Clerkenwell Films, with Channel 4 and then Netflix on board as financiers and broadcasters.
The End of the F***ing World
, whose second season aired last year and is already a Royal Television Society and Peabody winner and Emmy nominee, won two honors at last month’s delayed BAFTA TV Awards, for best drama and best supporting actress (for Naomie Akie).
“I was shocked, I cried; 8 years of this personal journey on this project and our show wins a BAFTA!,” Buchanan wrote. “I won a BAFTA! My name is on the TV screen as a winner! My parents are calling me! I am still in tears, how could this be true?! All the pain and trauma of making a show like ours, and we won, I messaged and called everyone dear to me and the rest of the evening and weekend were a blur of emotions and coming to terms with this new success.”
However, the producer says he later discovered that despite his production company — Dominic Buchanan Productions — being credited, he found out he wouldn’t be receiving the famed BAFTA mask, with the rules stipulation that it only goes to the four people named in the entry. In this case, it was writer Charlie Covell, director Lucy Forbes (even though she shared directing duties with Destiny Ekaragha, only one name could be put down), producer Jenny Frayn and executive producer, Clerkenwell’s Ed Macdonald.
“I couldn’t believe my eyes, they wouldn’t even allow me to buy a copy, much like the RTS Award, or the Peabody award that I have sitting in my flat,” he wrote. “This prestigious BAFTA prize that I had apparently won, maybe I really didn’t? Oh, but I could purchase a winners certificate if I wanted that instead?!”
Buchanan, who is from South London and of Jamaican heritage, also discussed his interactions with BAFTA over the years, particularly with regards to race. He claimed that he only was able to become a BAFTA member in 2015 after it was fought for by filmmaker Noel Clarke, despite his film having
Lilting
having been nominated for an award in 2014 (although he was not invited to the ceremony).
Since then, he says he was invited to help shortlist writers for the BAFTA Elevate campaign in 2018, and in 2019 asked to help curate the campaign, this time focusing on young actors, and later invited to be on their film jury for outstanding debut. In 2020, he was asked to be part of the Film Awards review, to help give insight into how to make BAFTA more inclusive, especially with regard to race.
“So imagine the devastation of being me, with everything I have achieved, and now not being able to get a copy of the actual BAFTA Award my show won, that my production company, that yes albeit due to ego, my name is a part of,” he wrote in the letter. “Imagine the furthered trauma of being the only Black person on the entire 8 year journey for a successful show (only Kharmel Cochrane has been on the journey almost as long as me), and everyone who is going to get the physical BAFTA is white?”
Buchanan says the decision to exclude him wasn’t down to racism, with his white colleague fully deserved of their awards. But he questions the arbitrary rules that prevent him from receiving an award and how they will impact his future abilities at pushing others up through the system.
“How can I now, with everything that has happened to me, how can I turn to people coming up behind me, specifically those of color, champion BAFTA and the awards system? What type of example does this set?  How can I give them any more of my time for their various inclusion efforts?,” he wrote.
“Bear in mind, I write this as a winner, who has been made to feel like a loser. I certainly do not want to come across as ungrateful, especially with everything going on in the world right now, but today I really needed to share my truth, because I am truly shattered.”
In a response from BAFTA, it confirmed out that Buchanan’s name was not put forward as part of
The End of the F***ing World
‘s BAFTA TV Awards entry in either 2018 or 2019.
“We would like to thank Dominic for raising his concerns as part of our ongoing review of the Film, Games and Television Awards, which scrutinises our processes, and for his ongoing contribution as a BAFTA member, which is hugely valued,” it said in a statement.
“Our current rules around candidates for nomination for the 2020 Television Awards are clear and the decision on who is put forward as a named representative of the Production Team is made by the entrant and not BAFTA. In this instance, Dominic was not put forward in either 2018 or 2019 and no appeal was submitted through our appeals process at the point of entry. We continue to review our rules and eligibility criteria each year, and as part of our ongoing review the number of candidates for nomination is one of the elements under consideration.”

Rihanna Reportedly Has a Caribbean Cookbook on the Way