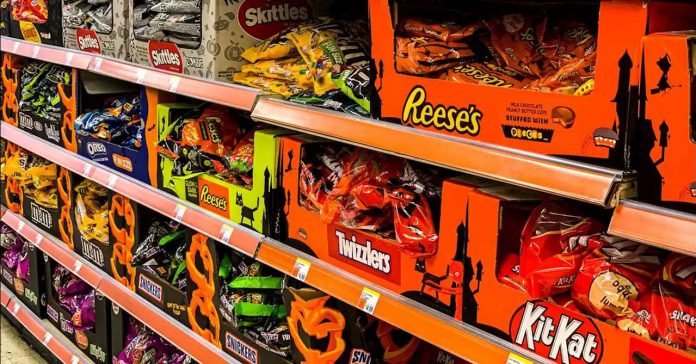 Plus, Chipotle debuts a Tony Hawk burrito, and more news to start your day

/Shutterstock
Halloween is coming early this year, with candy displays already up in some stores
With full knowledge that Halloween — and, more importantly, trick-or-treating — is going to look different in a pandemic, some candy brands are taking extra precautions in an effort to bolster sales during what is usually their best season.
For example, Hershey got a head start by asking retailers to set up their Halloween displays earlier than the typical mid-August or early September timeline,
CNN reports
. Hershey is also keeping more of its candy in the normal packaging, rather than the seasonal Halloween wrappers, boxes, and bags.
Mondelez, the company behind Sour Patch Kids, Swedish Fish, and other sweets and snacks, told CNN that it will focus on family-size packs of its bestselling products, predicting that more families will have smaller gatherings rather than let their children go out for trick-or-treating.

Mars Wrigley, which makes Skittles, Snickers, and other well-known candy brands, is going to devote more resources to stocking up product for e-commerce,
reports
.
But overall, Halloween candy sales might not actually suffer that much, given Americans’ quarantine eating patterns the past few months. Consumers have reportedly turned to
more snacking
and familiar foods during the COVID-19 crisis, apparently seeking comfort in a strange and stressful time. In fact, this year more than ever, you would have a good excuse to demolish an entire family-size pack of Twix on your own in one Halloween sitting.
And in other news…

Need a Mental Health Day? Some States Give Students the Option

Prince Harry Admits His Major Concerns for Archie in a New...