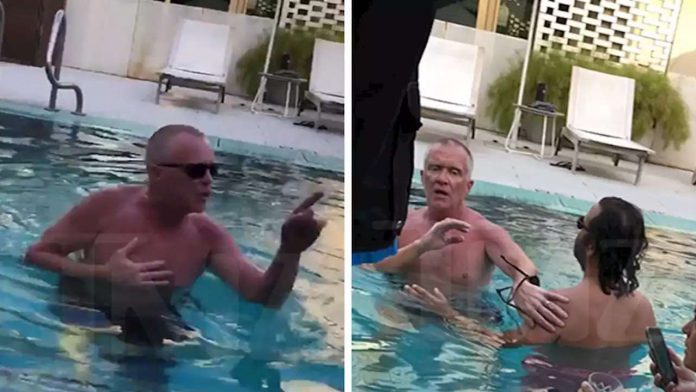 Anthony Michael Hall has apologized for going off on hotel pool guests in Austin, TX.

Anthony Michael Hall
got weird in a hotel pool and caused a ruckus over feeling disrespected, but video only shows him acting belligerent and disrespectful … and now he’s apologizing.
The ’80s movie star was with his wife and his assistant Wednesday afternoon at the South Congress Hotel pool in Austin, TX and brought along a portable speaker and a jug of something … according to witnesses.
We’re told Hall was being rude and obnoxious from the get-go — blasting his music, bothering other guests and cursing in front of kids, so he was asked to tone it down.
Based on this video, Anthony didn’t respond kindly to that request, and started yelling at the group of pool patrons … making it clear he didn’t care what they thought about his behavior, and accusing them of being in the wrong.

At one point he referred to a woman recording the incident as
Rosie O’Donnell
. Clearly agitated over her filming, he started splashing water in her direction.
Our sources say hotel security was called during the altercation, and Anthony ended up leaving the pool area. Police were not called.
Anthony’s now issuing a major mea culpa, saying he formally apologizes to the entire staff, his family, and everyone who witnessed the incident.
Hall says …”As a result of a misunderstanding and miscommunication between myself and some hotel guests, the situation needlessly and regrettably escalated.” He adds,”I am deeply sorry for my words and actions and ask for forgiveness from anyone who I may have offended.”
As you might recall … Hall