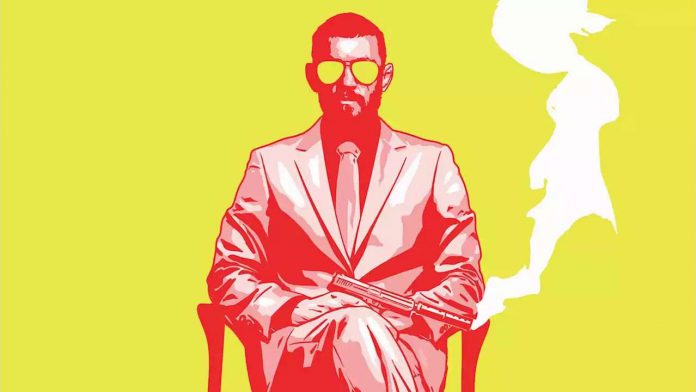 ,
Nick Fury
), with the two playing off each other’s strengths to create a story that’s part-corporate espionage, part-superhuman thriller and unlike anything else on the stands at the moment.
Heat Vision
breakdown
American Ronin
, the latest project from AWA’s Upshot line, is headed up by chief creative officer — and former Marvel editor-in-chief — Axel Alonso, and launches digitally and in comic book stores Oct. 7. Ahead of its debut,
The Hollywood Reporter
has an exclusive preview from the first issue, as well as a conversation with Milligan, ACO, and Alonso.
Peter, this feels like the closest thing to your Vertigo work that I’ve read in a while, while maintaining a contemporary feel. There’s a counter-culture, or perhaps anti-consumerist, element to the first issue that feels very much of the moment, combined with an almost gleeful existential thread that looks beyond who people present as to the rest of the world, instead preferring to look at who they really are. It’s classic Milligan, in other words—but I’m curious about how this series got started on your end. Were you exploring globalism and thought, ‘Oh, wait, there’s a thriller here?’
Peter Milligan:
In terms of the world of
American Ronin
— these multinational “pan-corporations” that stretch across national boundaries — something along those lines has been brewing in my mind for a while, waiting for the right story. During the financial crash of a few years back, one could really see how little power the democracies had, how actually most of the power was held by multinational banks, hedge funds, and money gurus. And now COVID-19 is revealing a similar reality, where the old national boundaries become increasingly irrelevant. That’s the world, the arena, in which the Ronin operates.
But with the Ronin himself, I’ve always been interested in exploring notions of self and identity, of those liminal spaces between who you are and who you might be, of being me and being you. And in the world of comics where so many of the “powers” are to do with strength or destruction, I thought it exciting — and an intriguing way to explore people’s identity — if our hero’s ‘power’ was ‘soft’. More subtle than heat blasts or power thrusts. The power to feel, the power to know.
The thriller/James Bond international espionage feel is a great way of getting into all the mechanics of how our hero gets under his targets’ skins. It’s a dehumanized world run by powerful multi-national behemoths, and all our hero has to fight back with is the very thing that makes us
most
human: empathy. But this empathy as weapon comes with a painful, emotionally-draining side effect. For, if you really feel and have deep empathy with a person, how are you supposed to feel when you kill him?
What’s the collaborative process like on the project? The book feels like the best use of ACO’s work in quite some time, playing with the visual delivery of exterior information as the script burrows inside what’s happening. How did that come about?
Milligan:
Let me say that I’ve been totally blown away by ACO’s art. It’s taken this book to a whole different level. I think we quickly learnt to know what we both wanted, and how we might best tell this story. I quickly saw how ACO’S fractured, almost cubist storytelling style perfectly suited the sometimes frenetic action and fractured personality of the Ronin and tried to respond to that. ACO is very good at letting us see everything he’s doing, so it’s easy for me to adapt and respond where I need to.

ACO, your layouts are especially dynamic in the first issue—not just in terms of having 19 panels on a double-page spread without it seeming too crowded, which is extraordinary, but also the placement and design of each panel on the page. Despite this, it never gets too complicated to follow. How do you approach a script and plan out the page to ensure that’s the case?
ACO:
I always try to approach each page in a unique way but that, in turn, works with the page that is next to it. For this, it is very important to be clear about the space that the characters and balloons will occupy. The structure of the pages and where the balloons are going to go is the first thing I do, I think it is the most difficult process since that structure will set the pace, time and narrative capacity of the page.
I usually add a lot of information in extra panels and this can be excessive for the reader if you do not let him rest. That is why I usually play a lot with the zooms and with the characters seen from the front and from the back from one panel to the next. Anyway, the approach to this comic has been different from previous works like
Midnighter
or
Nick Fury
, where the story asked you to be more explosive or crazy. Here, it was important to follow Peter’s story without artifice that could distract the reader from what was truly important.
Peter, what does ACO bring to this project that’s essential? ACO, what is it about Peter’s script that only he can offer a project like this?
Milligan:
Rather than simply visually represent my scripts, ACO has brought his own fractured nightmarish vision, helping to create a book that reads and looks quite original.
ACO:
Peter is a legend and one of my favorite writers. His way of working on the concept of the story and the treatment he gives to his characters is unique. For me, the fascinating thing about the series, apart from the thriller and the corporations that rule the world, is the way Peter shows a character that uses super-empathic skills to reach his targets.
Suddenly, killing no longer becomes so simple and has an emotional cost that we rarely see in movies or series. It is a very powerful idea that only Peter could come up with. Also, his development of the Ronin is great, and it really makes it very easy for me to capture it. It’s that kind of book that you can only attribute to someone as special as Peter Milligan.
Axel, you’ve worked with both creators before; what made you bring the two together for
American Ronin
?
Axel Alonso:
I just had a gut feeling that Peter and ACO would have great chemistry.  Peter is a very collaborative writer who really appreciates working with an artist who does more than just simply draw the script.  This is a cerebral action thriller; many of its most explosive moments aren’t action scenes, and ACO’s storytelling instincts really nail that down.
Related to that, what does
American Ronin
bring to AWA’s Upshot line — beyond the prestige of having Milligan and ACO on board, of course?
Alonso:
It’s a spectacular series. A big-budget action flick with the heart and soul of an indie sleeper. I think it will send a strong message about the quality, creative diversity, and unpredictability of the Upshot line.
GET THE
Sign up for Heat Vision’s weekly newsletter for all things comics, sci-fi and more.
SIGN UP!

Behind the scenes of future electric airports

Can You Really Work Productively at Home?

13 best and cheapest campsites in the UK now that we’re...