Home Woman Coronavirus cases stable across most of England 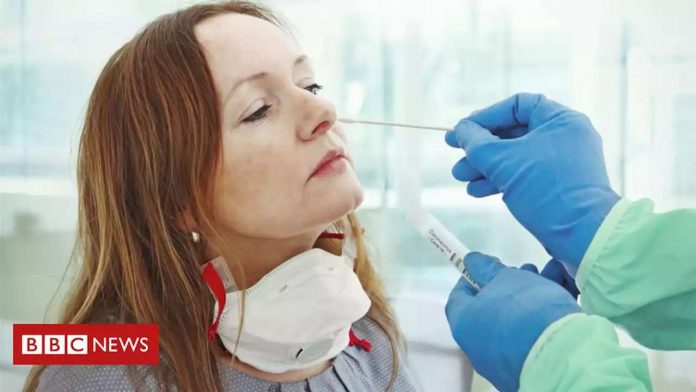 A survey by the Office for National Statistics suggests fewer than 0.05% of the population has the virus.

Image copyright
Getty Images
Coronavirus cases across England appear to be levelling off, despite flare-ups in local hotspots, according to estimates from the Office for National Statistics (ONS).
An estimated 1 in 1,900, or 28,300 people in England currently have the virus.
The ONS said evidence of a”small increase” in people testing positive in July has now stabilised.
It has been regularly testing people in private households since April.
The ONS survey provides a consistent picture of what’s been happening, because it regularly tests a large group of people – whether they have symptoms or not.
That means any changes are down to fewer or more infections, not just because more testing is taking place.
In areas where there have been spikes, more testing takes place.
Looking at the government’s figures, this can make it look like cases are rising, when in fact more are simply being uncovered.
Visiting people at home banned in parts of England
On the other hand, the relatively small number of people involved in the survey means the conclusions are based on 58 positive tests out of 122,000 swabs in the past six weeks.
But the ONS takes this uncertainty into account and even, with a margin of error, believes cases are levelling off.
Virus cases ‘may be levelling off’ in England
Public Health England, which does look at confirmed cases along with other measures, said the majority of indicators suggested”Covid-19 activity remained stable at a national level”.
But there was a rise in cases being identified and general”increases in activity” in the North West, Yorkshire and Humber and the East Midlands.
The area with the most cases per 100,000 people was Pendle, followed by Oldham, Blackburn and Bradford. But in Blackburn, cases are now falling – as they are in Leicester and Calderdale, the next most affected areas.
Find out how the pandemic has affected your area and how it compares with the national average – figures for Scotland, Wales and Northern Ireland to 13 August; figures for England last updated 12 August.

A modern browser with JavaScript and a stable internet connection are required to view this interactive.
How many cases and deaths in your area?
Enter a full UK postcode, English, Welsh or Northern Irish council name, or Scottish health board name to find out
Deaths
are death registrations where COVID-19 was mentioned on the death certificate. Source: ONS, NRS and NISRA – updated weekly. Although the numbers of deaths per 100,000 people shown in the charts above have not been weighted to account for variations in demography between local authorities, the virus is known to affect disproportionately older people, BAME people, and people from more deprived households or employed in certain occupations.
Cases
include positive tests of people in hospital and healthcare workers (Pillar 1) and people tested in the wider population (Pillar 2). Public health bodies may occasionally revise their case numbers. Northern Ireland only publish new figures on weekdays. Average is a median average of rates per area in each UK nation. Source: UK public health bodies – updated daily.
The government’s Scientific Advisory Group on Emergencies (Sage) believes the virus’s reproduction or R number is at or below one, indicating the virus is stable or slightly falling.
Symptom check
The Covid Symptom Study app run by company ZOE and researchers at King’s College London shows a similar picture.
It estimates 22,702 people currently have symptomatic Covid in the UK.
Symptom study figures, which are slightly more up to date than ONS figures, also show a rise in cases in July which then tailed off and have since fallen.
The government’s figures on”confirmed cases” – which just look at positive tests, but don’t adjust for more tests being done – look like cases are rising.
But there hasn’t, yet, been a corresponding rise in hospitalisations or deaths.
LOCKDOWN BABIES:

How Meghan wants to be known now she’s not a working...