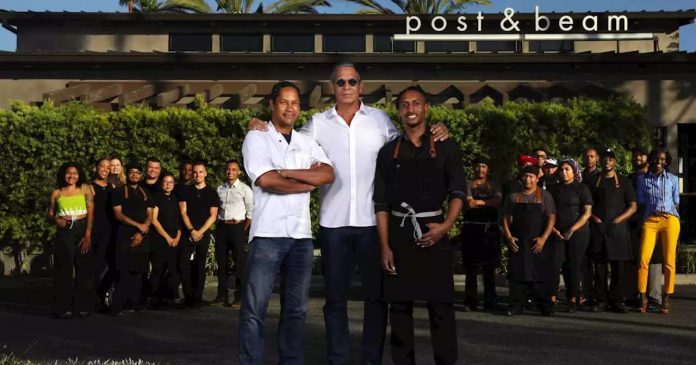 At full strength, Post & Beam is an essential Southern California experience, a special night out where people dress up yet feel at ease and, as they walk out the door: happy.

, who “blurred the boundaries between street food and fine dining,” Jonathan wrote, “in ways that some of us are just now beginning to appreciate.”
Last year, the Gold Award
went to Cassia’s
Bryant Ng and Kim Luu-Ng, who have skillfully blended the flavors of Vietnamese and other Asian cuisines with European technique and California seasonal produce, showing that fish sauce can be as important to the cuisine of Los Angeles as olive oil.
When Brad Johnson and Armstrong opened Post & Beam on Dec. 31, 2011, a fine-dining establishment in the parking lot of the Baldwin Hills Crenshaw mall, it was a critical milestone for Los Angeles. They ensured that any conversation about Los Angeles’ best restaurants had to go beyond the usual Westside/Hollywood neighborhoods, places each knew well from opening restaurants in those spots.
“Post & Beam is the most ambitious restaurant ever to open in the Crenshaw District,”
in 2013. “If you want to understand the power structure of South Los Angeles, you could do worse than to eavesdrop over grits and a Bloody Mary at Post & Beam after church on a Sunday afternoon.”
Advertisement
Jerked catfish with dirty rice and chimichurri sauce.
(Christina House / Los Angeles Times)
I’ve always loved the modern elegance of the dining room, the way the food so easily brought global influences into cooking that may have emerged from the American South but was undeniably Californian.
Armstrong, who has the DNA of Los Angeles fine dining in his bones, starting from his storied days as a teenage apprentice at Spago, was the right chef to establish Post & Beam. His kitchen adventures have encompassed the esoteric precision of Spain’s Michelin-starred Arzak, the foundational L.A. restaurants Campanile and City, and his breakouts at Jackson’s, Chadwick, Table 8 and 8 oz. Burger Bar, not to mention “Top Chef Masters” and “Iron Chef.”
A year ago, Johnson and Armstrong passed the Post & Beam torch to John and Roni Cleveland, ensuring that the restaurant would remain a Black-owned business.
Advertisement
“My fear was that there would be somebody of means who would come in, someone not from the community,”
Johnson told
The Times’ Amy Scattergood in September.

“What a loss that would be.”
Cleveland, who was mentored by Armstrong in the kitchen before taking over the restaurant, is not only fostering the restaurant’s reputation for excellence, he is making the place his own. During the pandemic, he’s adapted the restaurant’s takeout operations — adding weekly specials and summer cocktails, creating celebratory Mother’s Day and Father’s Day menus, promoting a Black-owned distillery — and with Roni at his side, he’s led an effort to feed seniors in the neighborhood, establishing Post & Beam as a vital local resource in hard times.
“As a proud South Central Los Angeles native, being able to carry the torch alongside John has been an incredibly humbling and rewarding experience,” Roni Cleveland said when she learned of the Gold Award. “Navigating this business through COVID has not been easy, but we were determined to survive and to be of service. This recognition lets me know that we are not only surviving — we are thriving!”
Post & Beam’s founding chef Govind Armstrong, left, current chef-owner John Cleveland and founding owner Brad Johnson.
(Christina House / Los Angeles Times)
Advertisement
Armstrong, who now leads the kitchen at the Lobster on the Santa Monica Pier and continues to be a resource for the Clevelands, said, “I hope for the continued opportunity to demonstrate the power and value of small, Black-owned businesses that serve their own communities while also welcoming their neighbors. To that end, we again thank you for this recognition.”
“The L.A. Times Gold Award acknowledgment carries with it such deep meaning,” Johnson said. “Jonathan was a hero to us. I’m grateful our team effort is being recognized in such a meaningful way at this very significant moment. While I know John and Roni still have their work cut out for them, hopefully, this important recognition adds to their resolve and lifts their spirits. I know it does mine, I’m soaring.”

A Letter to the Class of COVID-19 From the Founder of...