Home Woman With sports shut down at UCLA mind games are all anyone can... 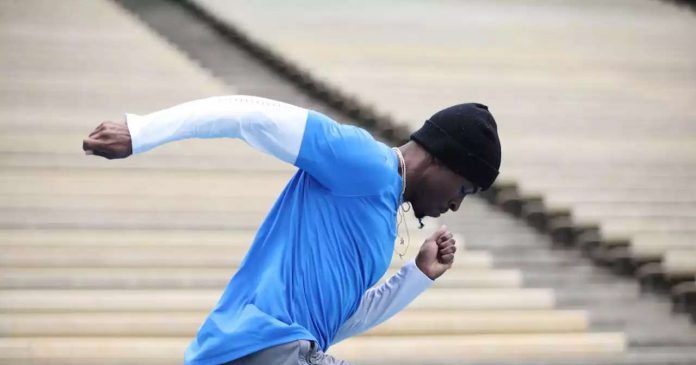 UCLA athletes talk about the mental strain of being in limbo over delayed and canceled seasons.

For UCLA, the season’s end is a resolution that prompts more questions
UCLA coach Chip Kelly and players react to the Pac-12’s decision of canceling fall sports this season.
Higgins is one of hundreds of Bruins athletes tormented by delayed or canceled seasons, along with the lingering uncertainty of when they might get to compete again. It’s caused enormous mental strain involving a litany of problems that do not come with quick, easy solutions.
Advertisement
Chip Kelly
, the Bruins’ football coach, told his players there’s no handbook they can reference for what can feel like the real-life equivalent of a fourth-and-long situation trailing late in a game.
“There’s no Page 52, ‘In the event of a pandemic do this,’ ” tight end Greg Dulcich said, repeating what Kelly told his team. “It obviously is pretty frustrating that there’s no one to turn to for answers on it because nobody really knows how things are going to play out, so you’re just kind of in this weird limbo.”
Athletes in a handful of sports said they’ve leaned on teammates, coaches, parents, friends and UCLA’s mental health specialists to help them persevere through the first five months of a worldwide crisis that shows no sign of slowing. A slew of school officials are trained to spot distressed athletes, but it became harder to do so once campus largely shut down in March and many athletes headed home.
At that point, mental health specialists formulated individualized plans to continue virtual services for those athletes already receiving care, said Mark Pocinich, UCLA’s assistant athletic director for sports medicine. Coaches routinely checked in with their players through Zoom meetings and the school held webinars focusing on ways to endure emotionally.
Advertisement
Athletes who returned to campus in the summer received another mental health screening that surveyed them about their concerns related to COVID-19 as well as other aspects of their life.
“I would say the uncertainty is the main thing you see and everything sort of springboards off of that,” said Lorita Granger, UCLA’s student-athlete well-being coordinator.
“I’ve had players calling me individually saying, ‘Coach, you’ve got to get us back. You’ve got to get me out of my house.’ ”
UCLA men’s basketball coach Mick Cronin
Granger noted that athletes are used to handling adversity such as torn knee ligaments, but even with devastating injuries there is an established timetable for when they should expect to play again. Not so with a pandemic that has forced the bulk of the school’s athletes to remain at home until return-to-training health and safety guidelines have been satisfied.
Advertisement
That means the biggest question confronting basketball players isn’t when they’re going to play, but when they’re going to get back into the gleaming Mo Ostin Center so that they can start training and regain a sense of normalcy.
“We have to get them back and in a routine because staring at the walls has become an issue for them,” men’s basketball Coach Mick Cronin said, “and I can tell you that because in the last three weeks, I’ve had players calling me individually saying, ‘Coach, you’ve got to get us back. You’ve got to get me out of my house.’ ”
Power forward Jalen Hill has been living at his Corona home with his parents and his sister Tatianna since mid-March.
Nearby workout facilities were closed initially, but Hill stayed in shape by sharing a friend’s home equipment and finding basketball courts to shoot with his father, George, a former player at Kansas State.
Advertisement
Having his son around for the longest period since high school has been enjoyable for the elder Hill, even if it comes with a pricey downside.

“If they said he could come back today, he’d be gone,” George Hill says of son Jalen Hill, a UCLA power forward who has been living at home in Corona with his parents and sister since mid-March.
(Chris Carlson / Associated Press)
“He eats a massive amount of calories,” George said with a laugh. “I live in the grocery store — that’s like my second home now, keeping him fed and everything.”
Jalen would trade in the home-cooked meals in an instant, his father said, if it meant getting back on campus with the teammates and coaches he considers a second family.
Advertisement
“If they said he could come back today,” George said, “he’d be gone.”
Campus might seem like a maddening mirage to shooting guard David Singleton because he lives in an apartment within walking distance but can’t access the facilities. He’s busied himself dribbling around the sidewalks of Westwood and playing in whatever open gyms he can find, wearing a mask and sometimes gloves.
It’s the second consecutive summer that Singleton has been unable to practice with his teammates; a year ago he was rehabbing from a broken foot, leading to what he called “kind of a slump” last season as he slowly rounded into form.
“The most difficult part for me is probably not seeing my teammates every day and developing that team chemistry you’re supposed to have over the summer,” Singleton said. “It’s just so weird how we’re not seeing each other in practice or in the gym every day.”
Advertisement
In a normal year, nonconference games would have started by now for the women’s soccer team. In the apocalyptic present, the Bruins are confined to strength and conditioning workouts in groups of about 10 while staying at least six feet apart.
“The only thing positive I can think of is more training time. But if you don’t have a season, then all that training time doesn’t really mean anything.”
UCLA athlete Kenroy Higgins II
Senior midfielder Marley Canales has shepherded a large group of freshmen through her role as a student-athlete mentor who serves as a liaison between players and UCLA’s counseling and psychological services. She’s encouraged teammates to talk about their experiences and what to expect from coaches and trainers as a way to make the newcomers feel more comfortable.
Players have held team videoconference meetings to try to build the culture they want on a team with national championship aspirations, but there are limitations. Canales remembered the fun she had as a freshman going out for coffee or to dinner with upperclassmen so she could accelerate her introduction to UCLA, a tradition that has been impossible to follow for the newest Bruins.
Advertisement
Canales said players have remained upbeat by pinpointing the positives: extra time to train and recover from injuries. Canales is among a handful of players coming back from a torn knee ligament and knows that she will be even stronger by the time the season starts.
“Some of the girls had talked about just kind of surrendering to the situation and not really fighting it,” Canales said. “I mean, there’s nothing we can really do except for following protocols and wearing masks and doing our part, so I think we’re definitely looking at the bright side.”
The football strength and conditioning staff injected some fun into the team’s training after the season was pushed back by including more games in workouts. One involves players sitting on the ground and tossing a ball into a bin with their non-dominant hand; misses require push-ups or some other form of exercise, sparking competitiveness in the team.
“They’re kind of making it like a fun vibe right now,” Higgins said, “putting everybody in a good mood.”
Advertisement

What Happened When I Tried a Crystal Mercury Retrograde Facial

What Emily Maitlis was most afraid of ahead of Prince Andrew...

Love Halloween Candy? This Company Will Pay You 500 to Eat...