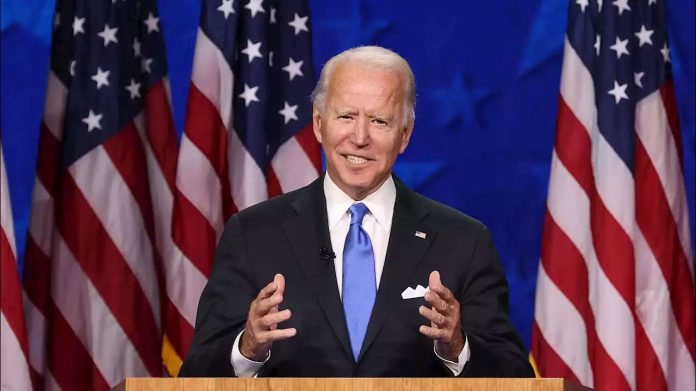 Biden and company rebutted some of the Trump campaign’s most prominent arguments.

Donald Trump
’s reelection campaign has portrayed Biden, again and again, as a doddering old fool who stumbles over words, forgets things and generally is not up to the job of being president.
Simply by delivering his nomination acceptance speech later that night, the Democratic presidential nominee pushed back against the Trump campaign’s argument. By delivering the speech well, he demolished it.
All four nights of the
Democratic National Convention
were dedicated, in part, to pushing back against different arguments the Trump campaign might deploy down the stretch as the president attempts to climb out of the hole he finds himself in.
Monday’s appearance from former Ohio Gov. John Kasich, a Republican, drew criticism because of Kasich’s history of fighting unions and working to restrict abortion rights. But Kasich was able to directly rebut another major Trump argument: that Biden would be a feeble-minded tool of the more radical elements of his party.
“I’m sure there are Republicans and independents who can’t imagine crossing over to support a Democrat,” Kasich said. “They fear Joe may turn sharp left and leave them behind. I don’t believe that because I know the measure of the man. … No one pushes Joe around.”
Biden is heading into the final 75 days of the election with leads in the polls both nationally and in key swing states, in part because the race is primarily a referendum on Trump’s term as president. A key part of keeping the race a referendum is denying traction to Trump’s biggest arguments about Biden, and the convention accomplished that.
Here are four other takeaways from the 2020 Democratic National Convention:
No Crowds Meant More Freedom To Cross The Aisle
The lack of a crowd, or even a real convention, in Milwaukee deprived Democrats of images of cheering fans and delegates. But it also freed them from a fear of boos. The virtual convention team repeatedly highlighted GOP supporters of Biden’s, something that likely would have drawn boos from liberal attendees and highlighted divides within the party.
Kasich’s speech, for instance, would not have gone well with the Ohio delegation ― many of whom fought the Republican for decades ― drowning him out. Even a figure as broadly respected as former Secretary of State Colin Powell would have drawn a negative response. And the speech from former New York Mayor Michael Bloomberg, who is widely seen within the party as having stiffed his campaign workers, would have drawn Bronx cheers from essentially every delegate or convention-goer affiliated with organized labor.
The trade-off likely helped the Biden campaign, which is continuing to reach out to moderate and conservative voters turned off by Trump’s handling of the coronavirus pandemic. It’s unlikely they’ll lose much support from more liberal voters, who polling indicates are not abandoning Biden in numbers significant enough to have any effect on the election.
There were other notable adjustments: The convention team clearly planned on creating viral content. Billie Eilish’s performance and call to vote on Wednesday night was designed to spread on youth-friendly Instagram and TikTok, while a speech from Brayden Harrington ― a 13-year-old boy who bonded with Biden over their shared struggles with stuttering ― will likely get shared on Facebook among what the Biden campaign called “empathy moms.”
A Focus On Biden’s Biography
Both Republicans and Democrats working on the presidential campaign agree that, for as many years as Biden has spent in national politics and public life, the public still does not know much about his biography. So the convention spent a lot of time trying to fill in the gaps ― telling the story of the tragedies that have struck Biden’s life over the years, and how they’ve shaped his worldview.

Biden’s speech, which clocked in at a short 24 minutes, was the culmination of this effort. Biden weaved his own story about coming back from personal tragedy with his plans to help America come back from the medical and economic damage wrought by the coronavirus pandemic, along with a few signature Biden flourishes, like a quote from the Irish poet Seamus Heaney.
“America’s history tells us that it has been in our darkest moments that we’ve made our greatest progress,” Biden said. “That we’ve found the light. And in this dark moment, I believe we are poised to make great progress again. That we can find the light once more.”
The overall goal was to make Biden seem like more than just another career politician. And it appears they succeeded in at least making the American public curious about Biden.
Per Google Trends, top questions on Joe Biden, during the DNC:
1: How old is Joe Biden?
2: What time is Joe Biden speaking today?
3: How many children does Joe Biden have?
4: How did Joe Biden’s son die?
5: How did Joe Biden’s wife die?
— Brian Stelter (@brianstelter)
August 21, 2020
A Lack Of Policy Detail Papered Over Intraparty Divides
Biden has never viewed the 2020 election as a fight over policy, instead preferring to frame it as a vaguer, more grandiose fight over the soul of the nation. During the primaries, he would often apologize to audiences if he spent too much time talking about policy ― a sharp contrast to candidates like Sens. Bernie Sanders (I-Vt.) and Elizabeth Warren (D-Mass.).
The convention proceeded in Biden’s fashion, rarely going deep into what exactly Biden would do to help solve the myriad problems the convention outlined, from gun violence to climate change to income inequality. Even Warren’s speech, in which she endorsed Biden’s plan to expand child care, did not delve into wonky details.
This is partially a result of the relatively short speech times: No one other than the four biggest speakers ― Biden, former President Barack Obama, vice presidential nominee Kamala Harris and former first lady Michelle Obama ― had more than 20 minutes to speak.
But it also was a convenient way to paper over some of the party’s divides between progressives and moderates, many of which are more about policy details than they are about the general direction the party should head in. Every Democrat can agree to fight for affordable health care, even if some think that should mean a “Medicare for All” system while others are hoping for a simple increase in subsidies to Obamacare.
Frank Talk About Race
Biden opened his speech with a quote from civil rights activist Ella Baker; Warren spoke in front of blocks arranged to read B-L-M; Harris declared there is “no vaccine for racism.” The Democratic Party has relied on Black voters for decades, but the 2020 convention likely featured more frank talk about racism and racial divides than any other convention.
The killing of George Floyd in May, and the subsequent protests around police violence and structural racism, have essentially left the party with no choice but to embrace the Black Lives Matter movement, even if neither Harris nor Biden explicitly said the phrase “Black lives matter.” (Hillary Clinton, however, did.)
“History has thrust one more urgent task on us. Will we be the generation that finally wipes the stain of racism from our national character?” Biden said during his acceptance speech. “I believe we’re up to it.”
Their appeal to Black voters was far from perfect: District of Columbia Mayor Muriel Bowser and Atlanta Mayor Keisha Lance Bottoms were both brought on to talk about structural racism, even while protesters in both cities argue their mayors have not done nearly enough to reform their police departments.
RELATED…

Robert Pattinson Tried to Lie His Way Out of Work for...