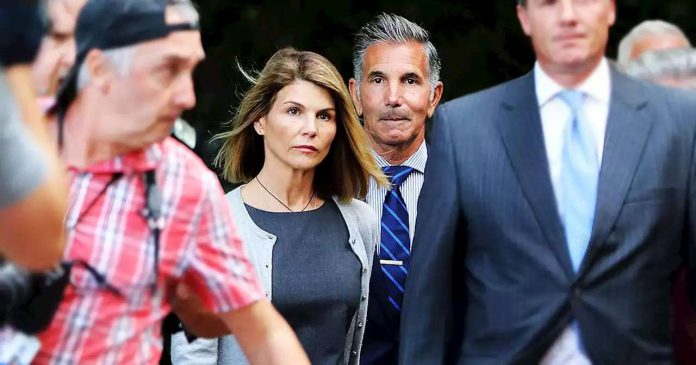 Loughlin said she ‘made an awful decision’ for her role in the scandal.

August 21, 2020
In April 2019, the couple pleaded not guilty in federal court after being accused of paying a bribe worth $500,000 in exchange for securing their daughters’ admission into the University of Southern California. In all, 55 people have been charged in connection with the college admissions scheme.
“I made an awful decision. I went along with a plan to give my daughters an unfair advantage in the college admissions process and in doing so I ignored my intuition and allowed myself to be swayed from my moral compass,”
she Loughlin said during her hearing
. “I have great faith in God and I believe in redemption and I will do everything in my power to redeem myself and use this experience as a catalyst to do good.”
In addition to fake athletic profiles, charges were also brought for “bribing SAT and ACT exam administrators to allow a test taker … to secretly take college entrance exams in place of students or to correct the students’ answers after they had taken the exam.

Loughlin’s attorney says Lori was a passive participant in the crime. But adds Lori knew what was going on and did not stop it.
— Robert Goulston (@rgoulston)
August 21, 2020
In addition to being the face of a nationwide scandal, Loughlin was fired from Hallmark where she regularly starred in their movies.
“We are saddened by the recent news surrounding the college admissions allegations,” the company said. “We are no longer working with Lori Loughlin and have stopped the development of all productions that air on the Crown Media Family Network channels involving Lori Loughlin including
Garage Sale Mysteries

Neri Oxman Has All the Answers

Opening Up Closing Ranks 5 Key Takeaways From Episode 3 of...

‘Spider-Man Far From Home’ Sound Team Featured in THR ‘Behind the...