Home Woman Where Do NBA Players Go From Here? 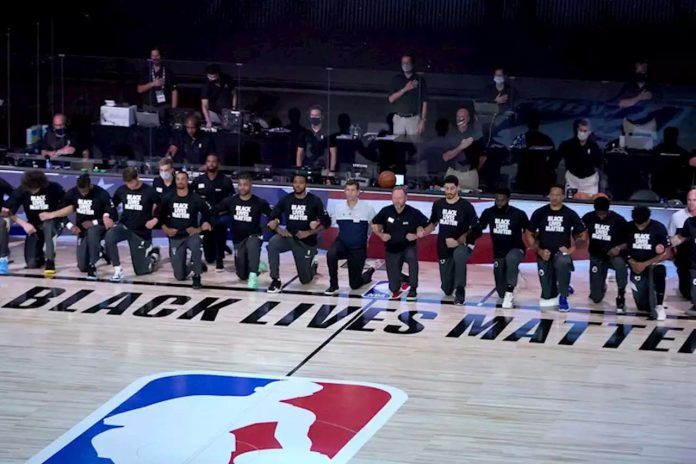 A conversation about how the athletes might continue their activism after striking.

the police shooting of Jacob Blake
in Kenosha, Wisconsin, and police brutality against Black Americans. The rest of the league soon followed the Bucks strike, canceling the night’s slate of playoff games, as did teams in the WNBA, MLB, and MLS, and professional tennis players like Naomi Osaka. The NBA’s players—confined in their Orlando coronavirus bubble—called an emergency meeting Wednesday night to decide next steps. In that meeting, LeBron James, along with his Los Angeles Lakers teammates and the Los Angeles Clippers, reportedly favored canceling the postseason entirely to continue the protest. ESPN’s Adrian Wojnarowski reported late Thursday morning, though, that
. At the time of this writing, it’s not clear when games will restart.
Twelve hours before Wojnarowski’s report, the panelists for Slate’s sports podcast
Hang Up and Listen convened
to memorialize a night that was unprecedented in our lifetimes. The ensuing discussion about this fast-moving story reflects what was known around midnight Thursday, when the conversation was recorded. A portion of that conversation is transcribed below; it has been edited and condensed for length and clarity.
Joel Anderson:
I don’t want to be one of those, “I love this league,” guys, because I think it’s really easy to oversell the NBA’s bona fides when it comes to social activism or whatever. But I do think it says something that the WNBA and the NBA—which had the Blackest labor forces in professional sports—have been
so much further ahead on these issues
than the rest of our country’s institutions on pretty much almost everything in 2020. And that’s [including] its handling of the coronavirus, because I think we all remember another night when the world stopped, March 11, when the NBA suspended its play. And I think it signaled to the rest of the country that this is really serious.
And so here we are several months later and the NBA has said, “Things can’t go on the way that it is right now.” And I should be more precise: It’s not the NBA, it’s the NBA players that have said, “Things can’t go on the way that they are,” and so we want to draw attention to this. And I know that people probably are cynical, maybe skeptical that this might have any real effect on what’s going on in our world. But I think that there is value in gestures and saying that, “Hey, this is really important to us, and it should be important to you.”
At a really basic level, for myself, I’m really tickled that people who don’t care at all about Breonna Taylor or George Floyd or Jacob Blake—or worse, people who derive some sort of sadistic pleasure from their plight—have had something taken from them, even if it’s just basketball for a few nights, [and] that they have to think about it and don’t get to enjoy a night of basketball.

I think it’s good that things stopped for a minute.
Stefan Fatsis:
I think it was good that things stopped for a minute and that when the NBA went into this weird season, this resumption of play in the bubble in Florida, a lot of the conversation initially was, “How do we keep momentum going? How do we continue to draw attention to social justice issues?” Kyrie Irving, who was not playing in the bubble, actually, suggested a boycott. That was the word that he used and the media used then. This is really a strike or a walkout, what happened on Wednesday. This started in the bubble with the desire to draw attention after the death of George Floyd and [to] the Black Lives Matter movement, and this continued focus on social justice.
This obviously isn’t what anyone wanted, another Black man shot by police. And yet, this is what is propelling the NBA players forward and the WNBA players and players in other sports. And I think really, Josh, the significance here from a sports perspective is this unity, this snowballing effect where what these basketball players are doing is affecting other players too, and other athletes.
And you mentioned the WNBA and baseball, which called off some games. Naomi Osaka, the tennis player, said she would not play on Thursday and that’s turning into a full day off, it seems like, from the tennis event that’s taking place in New York right now. There were Major League Soccer games also canceled. This is demonstrating the power of athletes to draw attention to an issue that’s larger than all of them.
Josh Levin:
What’s happening now among the NBA players in the bubble is, I think, a search for unanimity. There is a form of unanimity happening in sports right now where the boycott is spreading, the postponements are spreading. But in this meeting, based on the reporting we’re seeing, it seems like there are healthy differences of opinion around whether the Milwaukee Bucks—who didn’t come out on the court for their playoff game against Orlando Magic on Wednesday—should have clued in the other teams. The Magic were out there warming up. There was clearly no advanced warning given to them. There’s reporting that Jaylen Brown of the Celtics said, “No, the Bucks didn’t owe us anything, didn’t owe us any kind of explanation.” Other people, I think, had a different opinion there.
“Players were already on a knife’s edge, at their breaking point … And then the shooting happens, and it’s just collectively, ‘What the f––k are we doing here? Why are we doing this?’

Stop Everything Paris Hilton and Lindsay Lohan Are Starring in a...