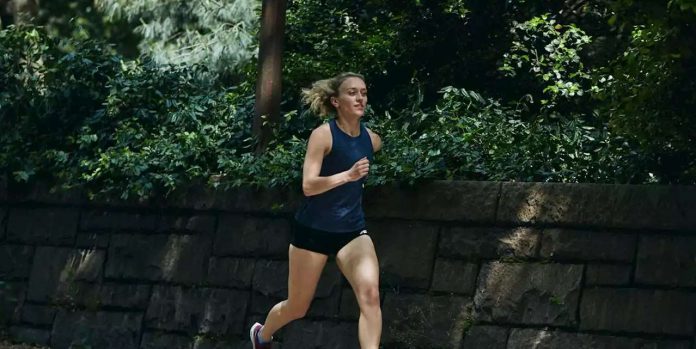 Whether you’re running solo 5Ks or getting out for marathon-distance trail runs, there’s a shoe in here for you.

SHOP NOW
Lighter and Softer
Women’s shoes share a few features based on characteristics that may or may not apply to you. It’s possible you might prefer a “men’s” shoe, just as some men might feel more comfortable in a “women’s” shoe. The designs of the shoes are just based on general group tendencies—such as that women have less muscle mass than men and tend to weigh less as a result. For this reason, women’s shoes often have a lighter and softer midsole to make up for the lower degree of impact put on the shoe with each stride.
Altra’s Fit4Her approach accommodates a slightly narrower heel and midfoot, a longer arch, and a higher instep.
Lakota Gambill
Merrell uses dual-density midsole foams (called Q-Form 2) in the women’s-specific Antora to counter slight overpronation.
Trevor Raab
Studies on foot shape
have shown that women’s feet aren’t just smaller, narrower versions of male feet—there are differences in overall shape that affect shoe fit.

Women’s feet tend to be comparatively wider in the forefoot, with a narrower heel. Running shoe makers take this statistical difference into mind when designing their shoes, and generally build their shoes with different heel shapes and sometimes different heel materials between the two models of the same shoe. Companies like Altra, with its Fit4Her technology, specifically design shoes that anatomically mirror a woman’s foot.
Related Story
These Are the Best Nike Shoes for Women
The Hip Factor
Researchers have also found that because women tend to have wider hips than men, our feet are more likely to strike the ground toward the outside of our shoe soles. The inward rolling of the foot that results from this is known as

Why the Increase in Domestic Violence During COVID-19?

8 Lessons About Toxic Relationships from the Bachelorette