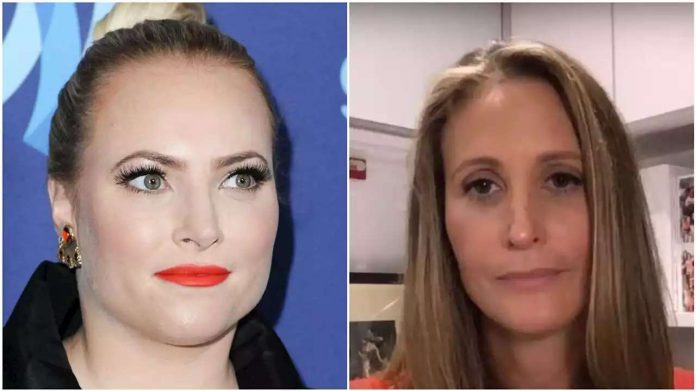 Stephanie Winston Wolkoff told ‘The View’ that she only started recording the first lady after being ‘accused of a crime’ and ‘thrown under the bus.’

about the first lady probably didn’t go as she intended.
That’s because Stephanie Winston Wolkoff came prepared to shut down McCain’s “gotcha” questions.
When Winston Wolkoff appeared on “The View” Wednesday to discuss her new book, “Melania and Me: The Rise and Fall of My Friendship With the First Lady,” McCain immediately accused her of being unethical in her dealings with her former friend.
“You recently revealed you secretly recorded your conversations with Melania,” McCain said before adding, “I don’t like tell-all books like this. I think they’re in bad taste, and generally, I think secretly recording your friend and selling [the] contents for profit certainly ups the ante, and seems not only unethical but just gross.

McCain also questioned Winston Wolkoff’s motives for publishing her book.
“The first lady’s office says you’re, quote, just out for revenge. … Can you honestly just sit here and tell me that’s not true?”
Winston Wolkoff thanked McCain for the question, saying it gave her the opportunity to clear up misconceptions about her motives.
“I did not write this book for money; I did not take any advance for this,” she said. “This was for me to be able to tell the true story and not be anonymous anymore. I’m on the record.”
Winston Wolkoff was in charge of President Trump’s 2017 inauguration, which cost a record $107 million and has come under fire for

Lizzo and Cardi B’s Retorts to These Mean Tweets Are So...

Coco Gauff Demands Change During Protest Speech ‘You Need to Use...