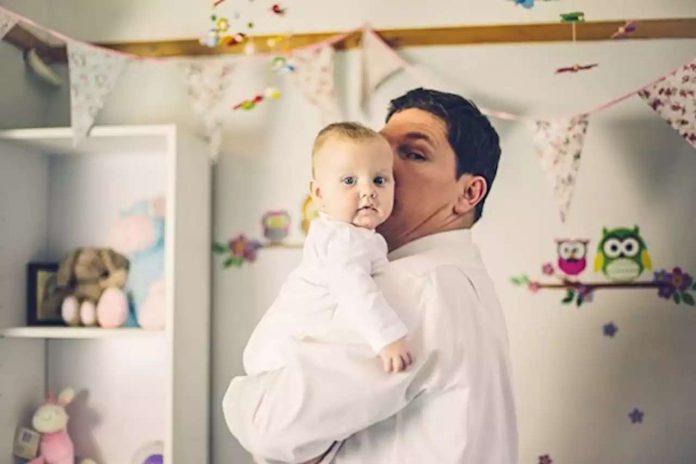 As your baby starts to outgrow their moses basket and smile for the first time, that tiny newborn you brought home nine weeks ago has changed in so many ways.

Section:
Baby Development & milestones
What can you expect when your baby is nine weeks old?
You’ve been on this new journey for over two months already, and by now we can bet you’re starting to notice all sorts of milestones in your baby’s development. From rattling to moving her out of the moses basket, we’re here to answer all your questions about this exciting ninth week…
How should a 9-week-old baby be physically developing?
Your little one will have grown about two inches since being born and probably gained around 2-3 pounds. All this growing means your baby is on her way to the big cot! If your little one seem crampeds in their Moses basket, you might want to move them into their new bed- but you can always place the basket inside the cot for a night or two to ease them into the new surroundings.
As they’re gaining weight, they’ll start to fill out a bit, giving them those adorable chubby baby thighs and arms! Those little legs and arms will likely be constantly moving nowadays, always kicking and shaking with excitement. They might even show more co-ordination and control over their seemingly jagged movements.
When you pull them up gently from a lying to sitting position, they should be able to hold their head in line with their body, but don’t worry if their neck muscles aren’t strong enough yet, every baby develops at a different pace.
How should a 9-week-old baby be cognitively developing?
If your baby hasn’t shown you their first smile yet, they are about to! Try and choose a moment when your nine-week-old is relaxed and not hungry or tired; play their favourite music and look out for that gummy smile. Speaking of music, your baby’s understanding of sound will greatly improve this week.
You may notice your baby has different reactions depending on the pace of a song, so it’s a good idea to test that by playing fast songs followed by a gentle lullaby – you may see them visibly relax, a good sign for when you want to introduce nap time.
While your baby’s hearing has been fully developed for weeks now, they will start to be more interested in the sounds they hear, which is why their reactions differ so much. Nine weeks is a good time to give them their first rattle – you’ll notice them excitedly trying to work out where the sound comes from, shaking it non-stop!
Another sense your baby is developing? Sight! They should show much more interest in different faces this week as their 3D vision develops, so you’ll see them staring intently at the differences in all of us. Objects or sounds about eight inches in front of them will catch their attention and they may start turning to identify where a sound or face is in the room. It’s a great time to bond with your baby and watch them smile when they see your face.
What jabs should a 9-week-old baby have?
You should have had your immunisation appointment last week, but if you’re only just fitting it in or they had to be postponed, here’s some advice on how to
keep your baby calm during their vaccinations
.
During their appointment, they’ll receive their first dose of the 5-in-1 injection against diphtheria, tetanus, whooping cough, polio and Hib (haemophilus influenza type B).
Then, they’ll get their PCV (pneumococcal conjugate vaccine) which fights pneumococcal infections, Rotavirus vaccine (which is a common cause of diarrhoea and sickness) and Meningococcal Group B which protects against things like meningitis and septicaemia.
They will receive these vaccinations either by injection or for rotavirus orally (a liquid dropped into their mouth). The injections are given in their upper thigh, one injection for each leg. It might sound traumatic, but should only take a few seconds.
You may need to postpone the immunisations further if your baby has a fever, diarrhoea or are very unwell, but if they just have a cough or cold they should go ahead just fine. Watch out for the fever they may get from the meningitis B vaccine, your nurse may advise you to give your baby infant paracetamol if a fever does develop.
How much should a 9-week-old baby be sleeping?
Your baby should be starting to sleep in solid blocks at night, usually about 5-6 hours although it’s different for each baby and 6-7 hours is still completely normal. They’ll be sleeping on average between 11 and 15 hours per day, with naps becoming less frequent but longer, giving you more time in the day to get things done! However, as their nighttime sleeps get longer, their daytime naps might be getting shorter.

To relax them before bed, try feeding at about 10pm or just before you go to sleep yourself, as it will induce a sleepiness that should tide them over until they wake in the night for a feed.
If you introduced a dummy to your newborn, it might be causing you some trouble about now. Some parents find themselves having to get up in the night when their little one loses the dummy, so try and reduce using it at night. You may be in for a few restless nights while they get used to settling without it, but it should be worth it in the long run.
Swaddling should still be coming in handy, but your baby’s growth spurt may be taking a toll on the wrap now. If you don’t want to buy a larger one, just wrap less of your baby to give them more room. Also, make sure your baby is not overheating if it’s summer – it’s a good idea to keep a close eye on the temperature in your baby’s room.
How much should a 9-week-old baby be eating?
Gaining almost three pounds since birth, they’re sure to be feeding more than when they were a newborn. As they continue to experience different growth spurts, they’ll be feeding more, usually about 5-6 feeds over 24 hours is normal at this age but just keep following their lead for when they are hungry – they won’t overeat at this age. One good guideline is to feed them 150-200ml per kilo of their weight, although you won’t be able to measure that if you’re breastfeeding (and not expressing) so just continue seeing their reaction, and if they seem full after one breast still offer them the second just in case.
9-week-old baby crying: Dealing with Colic
If your baby is suffering from
(defined as uncontrollable crying for more than three hours, three times a week for at least three weeks) they’ll usually settle in a few weeks time.
How much should a 9-week-old baby be pooing?
As they’ve gained weight and height, they’ve been feeding much more and therefore
pooing
more. However, many babies only poo once per day and some will fill their nappy a lot more frequently – anywhere between one and ten nappies a day is fine. If your baby is going less than three times per week, or seem uncomfortable or in pain when they go, they may be constipated and need to see a doctor.
Milestones of an 9-week-old baby
Muscle control:
Your baby is taking extra interest in their rattle now, the kicks and punches they learnt last week will be making all sorts of noise! It’s a great chance for them to develop their ability to identify sounds, their co-ordination and muscle control. They also want to hear you speak and hear the different tones and pitches in different voices, so keep chatting to your baby and give them a chance to coo in response – they’ll be talking before you know it!
Grabbing
: With your baby noticing more things on people’s faces and sounds around the room, their new interest may lead to over excitement and a lot of grabbing. As they develop their arm and handle muscles, expect to be grasped and grabbed all the time…now might be the time to avoid those dangly earrings.
Making new friends
: With your baby more alert and sociable during the day, it’s a good week to organise play dates and get out the house more. As your life starts to normalise, it’s good for both of you to not to be too isolated and to make time to be sociable. You’ll both be better off for a bit of outside interaction.
What problems should parents of a 9-week-old baby be aware of?
Daytime sleep
: Does your baby seem tired during the day but won’t nap? It’s a worry for any parent, as daytime sleep is important for development. At nine weeks, many parent’s start to notice this, baby sleep expert Jo Tantum advises: ‘Watch for his tired signs – rubbing eyes and ears, staring into space, getting grumpy, yawning, then take him into his room. Total blackout, sleeping bag and cuddles, try wave sounds to help calm him, too. Try giving him a comforter to hold – I suggest a muslin square knotted in the middle as this helps as his motor reflexes are wanting to grab things so this can really help comfort him.’
Crying

Eva Green On Playing A Western-Inspired Femme Fatale In The BBC’s...

New to RuPaul’s Drag Race? This Is the Best Episode for...