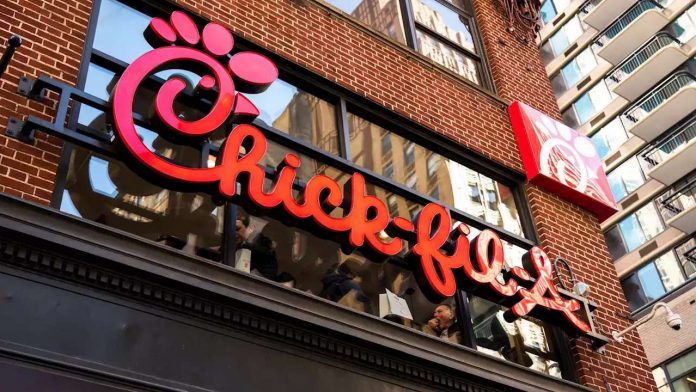 The fast food chain said it was dropping plans for a location at the San Antonio, Texas airport after more than a year of legal wrangling.

Acacia Coronado
AUSTIN, Texas (AP) — Chick-fil-A said Monday that it no longer plans to open a restaurant in the San Antonio airport, even though the Texas city relented after more than a year of legal wrangling that began when some city leaders opposed the fast-food chain getting a spot, citing donations made by company owners to anti-LGBTQ causes.
“We are always evaluating potential new locations in the hopes of serving existing and new customers great food with remarkable service.” Chick-fil-A said in a statement. “While we are not pursuing a location in the San Antonio airport at this time, we are grateful for the opportunity to serve San Antonians in our 32 existing restaurants.”
Some San Antonio City Council members blocked the chain from opening a restaurant at the San Antonio International Airport, saying they objected because Chick-fil-A’s owners have donated to anti-LGBTQ causes for years.
In May last year, Texas Attorney General Ken Paxton asked U.S. Department of Transportation Secretary Elaine Chao to look into whether the city had broken federal law or transportation department regulations. He said the fast-food chain’s exclusion from the airport amounted to discrimination “due to the expression of the owner’s religious beliefs.

The complaint
that ended July 24 with an informal resolution for San Antonio to allow Chick-fil-A to seek a lease in the city-owned airport.
Some Texas leaders
broadly supported
the company. Republican Gov. Greg Abbott signed a bill in 2019 in defense of Chick-fil-A and religious freedom. And on Monday, Paxton, also a Republican, heralded the agreement between San Antonio and Chick-fil-A.
“This is a win for religious liberty in Texas and I strongly commend the FAA and the City of San Antonio for reaching this resolution,” Paxton said in a statement. “To exclude a respected vendor based on religious beliefs is the opposite of tolerance and is inconsistent with the Constitution, Texas law, and Texas values.”
The FAA did not immediately returns calls seeking comment.
“The city itself offered to resolve the FAA investigation informally following Chick-fil-A’s publicly stated change-of-position on its charitable giving policy,” a city spokesman told San Antonio TV station
KSAT
. “The city maintains that at no point did it discriminate against Chick-fil-A.”
Atlanta-based Chick-fil-A has faced opposition elsewhere over its donations worth millions of dollars to groups that oppose same-sex marriage.
___

Alex Beresford slams police and Trump as he cries over George...

Miranda July Wants to Dream the Same Dream As You