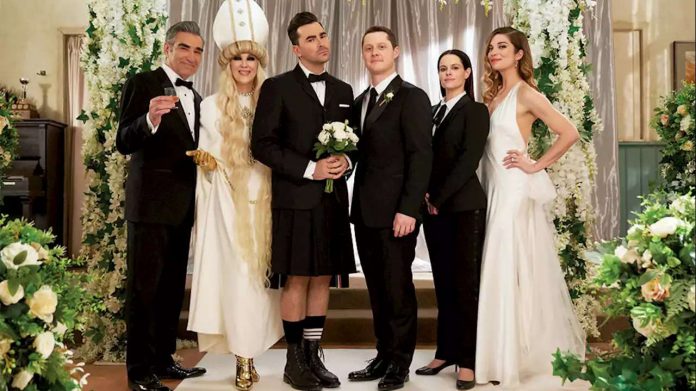 How long was this Emmy season? So long that when the online entry process began on Feb. 13, it was still a month before the COVID-19 pandemic started to shut things down. The biggest change to the …

0
Courtesy of Pop TV
How long was this Emmy season? So long that when the online entry process began on Feb. 13, it was still a month before the COVID-19 pandemic started to shut things down. The biggest change to the Emmy race was going to be the lack of DVD screeners. Network and studio awards executives had already been allotted their dates in the Emmy For Your Consideration lottery, and plans were well underway for this year’s bigger-than-ever events and pop-up installations.
And then, of course, the world changed. But after a moment where some wondered whether the
Emmys
would happen at all (or wind up as merely a press release), creativity kicked into gear. And by summer, the networks, studios and all of us who cover these proceedings had pivoted hard to virtual campaigning that I’d say went better than anyone might have expected. It was a most unconventional awards season, but in the end, I don’t think we lost sight of what this whole damn exercise is all about: recognizing great storytelling, talented artists and the programming that keeps us entertained — especially during these brutally difficult times.
Without any events to really gauge audience reaction, it’s even more of a guess to predict this year’s victors. As they sit at home in their pajamas, waiting for their names to be called, who might be remotely celebrating at the COVID Emmys? Here are some educated guesses.
In the drama race, I continue to lean toward HBO’s “
Succession
,” last year’s TV obsession that probably would have been a shoo-in this year had the pandemic not delayed Season 3. That’s why “Ozark” may still have a shot. The Netflix drama received a bit of momentum after nominations day when it tied “Succession,” with 18 nods apiece.
The “Succession” trend should extend to the drama actor field, where star Jeremy Strong might have an edge over colleague Brian Cox (perhaps repeating Kendall Roy’s season-ending chess move over family patriarch Logan Roy). But Strong and Cox could also cancel each other out, opening the door for Jason Bateman of “Ozark,” or a repeat win for “Pose” star Billy Porter. “Ozark” at least is likely to get the drama actress win, for Laura Linney, even though “The Crown” star Olivia Colman could still be, well, crowned. Drama supporting actress is a tough one — Colman’s co-star Helena Bonham Carter could take the award, unless voters love “Succession” so much that Sarah Snook sneaks in. The show’s Kieran Culkin, after all, is likely to cop the hardware for supporting drama actor.
Best comedy comes down to the final season of Pop TV’s “Schitt’s Creek,” which became a pop cultural phenomenon in recent years (thanks in large part to its accessibility in repeats on Netflix).

Don’t count out Amazon Prime Video’s “The Marvelous Mrs. Maisel,” particularly given the streamer’s aggressive campaigning for the critically acclaimed comedy, and the fact that “Maisel” is a previous winner (in 2018). Also on the rise is HBO’s “Insecure,” following a stellar season (and with star Issa Rae on a roll, having also executive produced variety sketch nominee “A Black Lady Sketch Show”).
That “Schitt’s Creek” sheen feels likely to extend to lead actress Catherine O’Hara and lead actor Eugene Levy, with co-creator Dan Levy landing supporting actor. That would upset Rachel Brosnahan in the actress race and Tony Shalhoub for supporting actor — both previous winners — but “Maisel” will at least be repped on the virtual podium by Alex Borstein, who figures to run her streak to three as supporting comedy actress.
Most likely shoo-ins on the night are in the limited series category, with the universal acclaim for HBO’s “Watchmen” and its timely take on systemic racism in America. That, of course, extends to star Regina King for TV movie/limited series actress — and I’d love to see Jean Smart and Yahya Abdul-Mateen II get the blue ribbon in the supporting categories. Mark Ruffalo, of HBO’s “I Know This Much Is True,” is the front-runner for movie/limited actor.
In the other main categories, old habits die hard: “RuPaul’s Drag Race” (competition program), “Last Week Tonight With John Oliver” (variety talk) and “Saturday Night Live” (variety sketch) will probably continue their streaks. It’s not exciting, but as I’ve mentioned many times, some of these categories have wound up in a bit of a rut because voters have their favorites — and those tastes don’t change overnight.
The key question now, of course, is what the Emmy telecast will actually look like. In such a challenging year for the country and the world, it’s nice to have something to look forward to — and I can say that this is the most eagerly I’ve anticipated an Emmy ceremony in quite some time.
Below, here are my final predictions for this year’s major categories, followed by  what many of my colleagues are predicting will win this year — as first posted in this week’s edition of my AWARDS HQ newsletter. So far we’re all mostly on the same page with the major awards (it’s probably going to be a good night for “Succession,” “Schitt’s Creek” and “Watchmen”), but check out a few daring predictions below!
Michael Schneider

Have We Hit Peak Tie-Dye?