Home Woman BTS’ V Had a Priceless Reaction to Realizing He Fixed His Zipper... 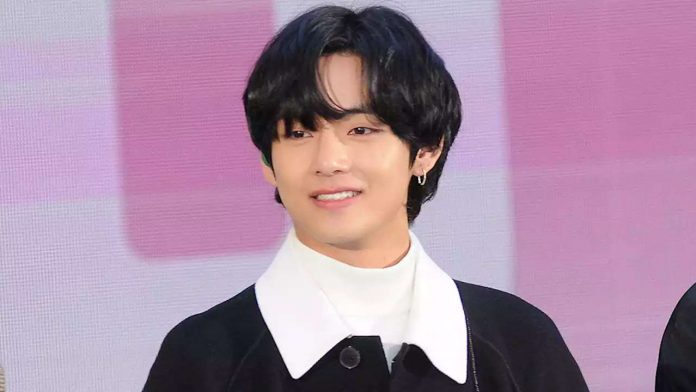 He literally made the shocked face emoji.

Oh, Tae. A viral video of BTS V’s reaction to fixing his zipper on camera (by accident!) is making ARMYs LOL. Read on to find out what happened.
BTS—which includes V, Jungkook, RM, Jimin, Suga, J-Hope and Jin—were guests on the South Korean radio show, “Bae Cheol-soo’s Music Camp,” to promote their new single, “Dynamite.” Before the live radio show started, the members arrived at the station and sat down at their seats, according to SBS. After he sat down, V was then seen looking at the zipper of his pants. Before anyone (aside from the camera) could notice, V fixed his zipper and looked back up for the interview. Moments after he fixed his zipper, however, the radio show’s host, Bae Cheol-soo, told the members, “Our show has begun live-streaming on YouTube earlier.”
When he V heard this, he looked around at the cameras before his eyes widened and his mouth dropped in shock. He stayed frozen like this for a couple seconds before the shock wore off and V resumed the interview. Though the moment was only a few seconds long, eagle-eyed fans screen-recorded V’s face and posted it on the internet, where his reaction went viral. (For other funny BTS wardrobe malfunctions, including another V moment, read here.

“taehyung’s face when he realised that the interview was being live streamed just became my new favourite thing ever,” wrote Twitter user @ENCHANTlNGTAE.
“His zipper was unzipped & when he zipped up the host said they’re livestreaming he was so shook,” wrote Twitter user @Let_love_V.
Twitter user @hoeforvincent tweeted, “Pls poor babie was fixing his zipper and panicked when he realised he’s been on camera the whole time.”
BTS released “Dynamite,” their first all-English single, in August 2020. After its release, the song became YouTube’s most watched music video in 24 hours. In an interview with Apple Music’s Zane Lowe, RM explained the meaning of “Dynamite.”
“[‘Dynamite’ is made of positive vibes, energy, hope, love, the purity, everything. Recording this song was really fun, and like Jin said, we’re going through difficult times so we tried to have more fun working on this song. We made this song in hopes of giving energy to the listeners. We’re glad this song turned out great and hope a lot of our fans can listen to it to receive the positive energy we tried to incorporate in the song,” he said.

Passion Twists Are Taking Over Instagram Here’s Why You Should Get...